A Hot Day at the Beach 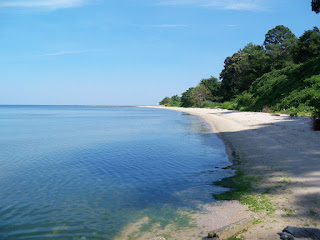 Another sunny, beastly hot day here in Southern Maryland. Temperatures topped 96 F, with ghastly humidity. Nevertheless, the damn snow dog wanted demanded a mid day walk, so we drove down to the beach. 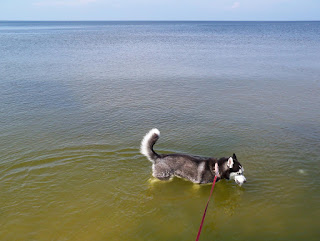 We've started using a double leash, which allows Skye II to get further out in the water and actually swim, which she seems to like to do, unlike Skye I, who would not swim without a good excuse, like a deer. 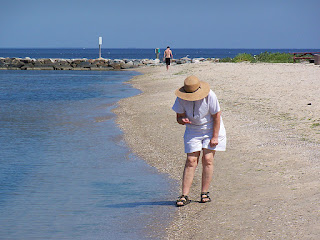 Georgia looks for fossils. We had a pretty good day, with 22 teeth in all. 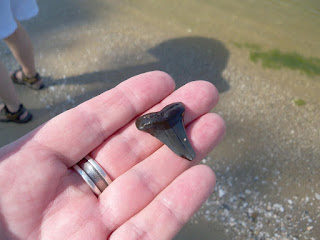 I lucked out, and found the biggest, this pretty worn Mako. It's not as nice as the Megalodon Georgia found a few days ago, but it will do. 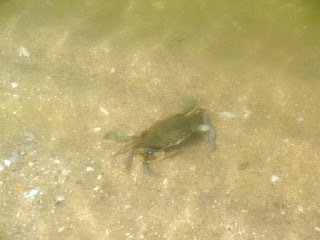 There were a fair number of Blue Crabs in the shallows, suggesting incipient low oxygen, although I didn't see the bottom fish that usually signal a bad low oxygen even. 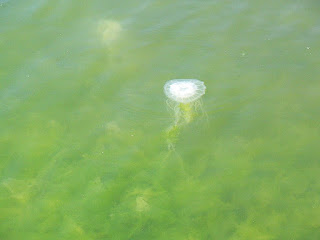 The Sea Nettles are in pretty thick, some days much worse than other. We also have a heavy growth of the green seaweed Ulva, which drifts around in the shallows, and forms the green background in this shot, and the green stains along the shore in some recent pictures. It's basically harmless, even edible in a pinch, but kind of obnoxious. 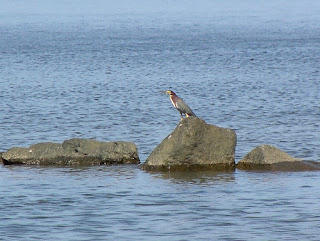 A Green Heron fishing off one of the groins. There are a lot of bait fish in the shallows, which leads us to: 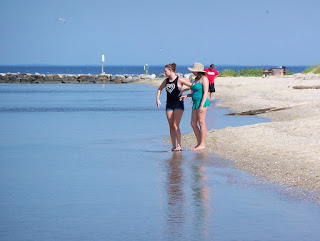 Some spectators.
Posted by Fritz at 8:41 PM