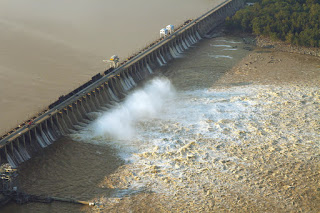 
On July 7, Maryland Gov. Larry Hogan (R) announced the state is forming a multi-agency work group to study ways to reduce sediment reaching Chesapeake Bay. Annually, sediment enters the bay by way of the 53 gates at the 572-MW Conowingo hydroelectric facility on the lower Susquehanna River in Maryland, from flow in its nine-mile-long reservoir that extends into Pennsylvania.

During his press conference on Thursday, Hogan said, "Simply put: This is a growing problem. It's getting worse, and it must be solved.”

True, and it's been that way since I arrived in Maryland in 1985. It's almost not true in the sense that with the dam nearly full of sediment, the problem is not growing, it's here, full blown.

The Conowingo Dam is a concrete gravity dam that has a maximum height of about 94 ft and a total length of 4,648 ft. Sediment in the dam's 310,000 acre-feet reservoir is at capacity, according to a study this year by the Lower Susquehanna River Watershed Assessment. The U.S. Army Corps of Engineers estimates dredging the sediment would cost billions of dollars.

The facility is the lowest of a series of dams on the Susquehanna and the last barrier between much of the Chesapeake Bay watershed and the waterway itself, and the reservoir supplies flow to 11 turbines in the Conowingo powerhouse.

That dam provided an unanticipated bonus for the Chesapeake Bay, by trapping sediments for nearly 80 years. With it full, it no longer efficiently traps sediment, and the system is in danger of returning to its 19th century properties, with 21st century pollution loads.

According to a 2014 U.S. Geological Survey estimate, more than 160 million tons of sediment is behind the Conowingo Dam, built near Darlington, Md., in 1928. About 3 million tons arrive there each year, and about a million tons of that sloshes over the gates, according to USGS hydrologist Mike Langland.

Published reports indicate public officials took note of the increasing threat to the Chesapeake Bay in 2014 after Tropical Storm Lee produced record flows in the Susquehanna River in September of that year. The amount of precipitation from the storm forced officials to open the sluice gates at the dam releasing an estimated 4 million tons of sediment in about four days, equaling what the bay normally gets in four years.

I don't want to blame Gov. Hogan for this. The planning should have been done several administrations ago. It's time to formulate a plan to do something.

How about dredging the pool and sending everybody upstream a box or 10 of sediment, to do with as they wish?
Posted by Fritz at 3:21 PM