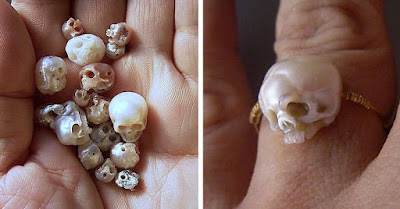 Since 1974, Tokyo-based Shinji Nakaba has been creating unique pieces of jewelry. Unlike some other artists, everything he creates is completely wearable.

In fact, Nakaba calls his creations, “wearable sculptures,” and uses unconventional materials for the majority of them. These intricately carved pearl skulls are just one example of his exceptional work. 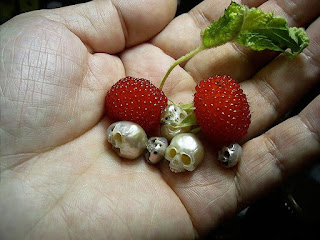 This seems like a pretty expensive medium to work in.


After attempting these skull carvings with coral, crystal, ivory, and precious stones, Nakaba discovered pearls without cores. The lack of core allows for a smoother carving, without the issue of shredding or peeling.

On his website, Nakaba says this about his pearl skull carvings:

“I’ve experimented with different type of materials to carve out skulls but the ones I carved out of pearls are by far the best in terms of the durability. I also thought the contradiction between pristine pearls turning into these dark objects seemed even more appealing. I would call them Fairy Skulls.

Very cute, and just a bit macabre.
Posted by Fritz at 5:00 AM