From someone who experienced white collar crime from the victim side: Hillary Managed Her Emails Like Criminals I’ve Known

See if you can spot the difference between these two sentences: I didn’t do it. There’s no evidence I did it. Now Google this: Hillary no evidence.

Notice anything? Never in the history of world has a human being been so completely buried under a mountain of no evidence. Hillary Clinton can say there’s no evidence she sent classified emails until the evidence shows up, at which point there is no evidence she knew they were classified, until evidence of that shows up, at which point there is no evidence anyone got hold of it, until 400 people are willing to stake their lives that it was certainly compromised by sophisticated bad actors, at which point there is no evidence that it mattered.
. . .
A few years ago I was running a company and we caught a couple of people embezzling. A top tech guy with complete access to our computer system got in cahoots with the financial controller. An affair was involved. Federal prosecutors will tell you this kind of nasty collusion is rampant these days. They were systematically looting our cash flow, and, given their respective positions, able to cover their tracks. When they found out I was bringing in more financial oversight (the tech guy had tapped into my email) they knew the jig was up.

Unknown to anyone, they began destroying evidence as fast as they could. They ordered a shredder (yes, at company expense) and had it shipped to the controller’s apartment, where they furiously disintegrated satchels full of documents they had spirited from the office: financial records, expense reports, receipts—everything incriminating. The tech guy,  a long-term, highly trusted employee, wiped everything, including backups.

The new oversight people came in, saw what was happening, and blew the whistle. The “perps” were arrested, as they knew they would be, and thus began my painful education in the surprisingly fragility of “evidence.”
. . .
I was absolutely astonished that people so clearly guilty of crime number one, and who so openly destroyed the evidence of that guilt—crime number two—would be greatly rewarded for crime number two by having made it difficult or impossible to prosecute them for crime number one, which, in turn, would make crime number two moot. Criminals seem to know this stuff, somehow.

Fortunately, we drew a prosecutor who was tough, determined, and had been around the block a few times, and she wasn’t having any of it. But it took four years, and when they went to jail, it wasn’t for the main crime, because they had destroyed the evidence of that. Prosecutors found enough evidence to get them convicted for ancillary things, sort of emanations from the crime. They left just enough traces, essentially things they forgot about, to nail them on mail fraud and tax evasion (you know, the Al Capone approach), and that induced them to provide a full confession.

30,000 emails deleted from Hillary Clinton's super-secret, private server, in such a way that the FBI was only able to recover traces. There was something there she really wanted needed to hide, and it wasn't yoga routines and Chelsea's wedding plans.

Ace on the Massacre on the Tarmac: FBI Agents Believe Loretta Lynch and Bill Clinton Struck a Corrupt Deal in That Secret Tarmac Conclave. Justice was murdered.


The FBI demanded all agents working on the email case sign an unprecedented Double Secret Probation NDA -- the Obama Administration's go-to tactic for making sure its corruption isn't exposed. Tell the truth, lose your pension.

But anonymously, FBI agents are saying that tarmac meeting was a crime scene.


Based on the most recent available DHS data, the U.S. permanently resettled roughly 149,000 migrants from predominantly Muslim countries on green cards in 2014. Yet Clinton has said that, as President, she would expand Muslim migration by importing an additional 65,000 Syrian refugees into the United States during the course of a single fiscal year. Clinton has made no indication that she would limit her proposed Syrian refugee program to one year.

Once begun, government programs only tend to grow, as they become necessary for the nourishment of the bureaucrats who run them. Shouldn't Nice, and Paris and all the rest have shown the folly of importing large numbers of restive Muslims into a largely non-Muslim country?

My Democratic Problem With Voting for Hillary Clinton You mean other than the fact that she's liar and a crook. Being a democrat, he means she's not racist enough.

Ace notes the LA Times disparaging their own poll that shows Trump in the lead: LA Times: Our Stupid Lying Poll Shows Trump With an "Apparent Slim Lead" Over Our Beloved Empress, 43-40


The LATimes does everything to humiliate this poll short of sleeping with its wife but this is just one of a bunch of polls showing Trump ahead (or having at least closed to a tie). 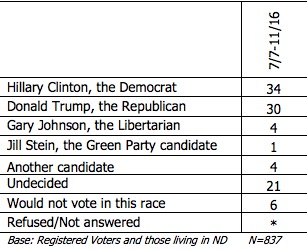 However, when you give people options other than Hillary or Trump, more take them than either of the main line choices: New national AP poll: Hillary and Trump now trailing … some other option


Add up those totals and you get Hillary 34, Trump 30, Gun In My Mouth 36. If you force the last group to choose between one of the four party candidates, it shakes out at Hillary 40, Trump 35, and, interestingly, “other candidate” at nine percent, ahead of both Gary Johnson and Jill Stein. Are America’s write-ins collectively looking at nearly 10 percent of the vote? The libertarian and the communist are good enough for a protest vote if you’re that disaffected by the major-party candidates.

The Atlantic finds Hillary Has No One to Blame but Herself


The collapse of her credibility was totally predictable, and totally avoidable. That makes Clinton’s actions particularly galling to Americans like me, who would never vote for Trump but who don’t want to condone her conduct; who don’t know whether they can trust her; and who now face a hard choice: Vote for Clinton, vote for a candidate outside the two-party system, or don’t vote at all.

She can't help it. Criminals are going to commit crimes and then try to evade the law. That's what criminals do.
Posted by Fritz at 10:39 AM