This may be the last Clinton.com for a while. We'll be out to Pismo for a week or so, and I'm not going to spend my vacation detailing the Democratic candidate's misdeeds and foibles.

It's no fun when you have to explain the joke: Donald Trump: I was being sarcastic with Russia hacking comments Well, duh. The media knew it; they just wanted to blow it into a gaffe if possible. Ann Althouse points out how Trump has jokingly called out to hackers before, with regard to Obama's college records. Jazz at HotAir thinks The media wasn’t prepared to handle sarcasm from a candidate. That's BS. They handle it just fine when it's directed at Republicans. Try this one: Democrats Get Mad At the Russians; In Other News, a Dog Marries a Cat. The only time the get mad at the Russians is when it hurts the Democrats:


The reaction of the Democrats and the suddenly-not-Walter Duranty media was classic. Like a teen confronting her dad who is holding the baggie of weed he found in her nightstand, the DNC cried “OMG, I can’t believe you went through my stuff!” before throwing herself sobbing on her bed at the unfairness of it all.

Who Is Putin’s Real Ally? As Roger writes, “There’s money in them thar reset buttons!” By way of Wombat-socho's "In the Mailbox, 07.28.16", Tailgunner Hillary and the Putin Hack: What Robby Mook did is pure McCarthyism. McCarthyism is only bad when employed against the Democrats, Amirite?  In fact, many think that the apparent Russian fingerprints on the hack is a false flag: U.S. theory on Democratic Party breach: Hackers meant to leave Russia's mark. James Clapper  not ready to tell the truth identify source of Democratic email hack.


One of Trump’s great skills is his ability to lure people into making complete fools of themselves. Like Larry Tribe, here:Former Obama mentor: Trump’s Russian hack ‘jokes’ could ‘constitute treason.’

But after all the wolf-crying, smears, and nastiness aimed at inoffensive GOP candidates, they deserve Trump.


Donald Trump owned the news media on Day Three of Hillary’s Coronation. He even topped President Obama, who gave a wonderful speech that rallied Democrats behind Her Royal Clintoness. Nevertheless, Trump owned the news cycle.
He did so by holding a press conference. The press conference is now his favorite format. He is sharp, funny, spontaneous, and quick on the uptake. As is usually the case, at the press conference he fielded more hostile questions from the media in one hour than Hillary has in her entire pampered, Ivy League, first lady life.

Leaked DNC Voicemails Reveal Special Favors And Deal Making With Rich Donors In other words, business as usual. Hacked voicemails reveal Democratic rage against Bernie. How could anyone be upset at such a nice old man? All he really wants to do is take all your money away, and give to his friends. DNC staffers waiting for Wikileaks to drop the other shoe. In the meantime, the circular firing squad are loading their 30 bullet magazine clips.

“Hillary has committed serious felony violations of federal law. So naturally, the left is acting as if Trump committed ‘treason:’”

Meanwhile Judicial Watch keeps the pressure on, pushes for Clinton deposition. The Bureaucrat at the Center of Hillary’s Scandals "Patrick Kennedy has been linked to Benghazi and Hillary Clinton’s private email server. Here's how he survived years of GOP and FBI investigations."


In his role as under secretary for management and resources, Kennedy was the senior official overseeing both diplomatic security during the 2012 attacks in Benghazi and the records and IT departments during “emailgate” — the four-year period when Clinton used a private email server for official business.

Instapundit notices Ann Althouse noticing Hillary's resemblance to a famous Munch painting: Is there some reason why Hillary keeps doing this gaping-maw face? 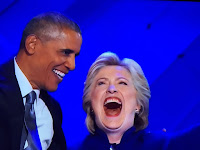 An alien attempting to feign human emotions just might look like that. But it's not all unicorn farts, and Sasquatch dung: Hillary Obstructed Boko Haram's Terror Designation as Her Donors Cashed In and How Hillary Clinton Mainstreamed Al-Qaeda Fundraiser Abdurahman Alamoudi. Just think of what she can do as President. 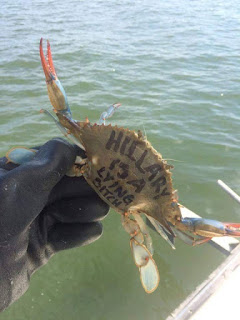 
This image has gone viral on several different platforms, each one claiming the crab is from a different part of the country. One duplicate post on Imgur claims the crab hails from Florida, but in actuality, the first post that can be found has the crab originating from Maryland.

Althouse was on a roll yesterday: Does the girl need Daddy to carry her? She gets by with a little help from her "friends." The Hillary Clinton speech we'd like to hear: Our view


I, along with Chelsea and Bill, have appointed a new board to manage winding down the Clinton Foundation while I'm president. Its many good works will be continued by the Bill and Melinda Gates Foundation. There will be no conflicts of interest, nothing to raise doubts about whether your president is working for you and for you alone.

Good luck with that. The Coming (And Hilarious) Democrat Implosion.  LA Times Tracking Poll Shows Trump's Lead Growing Through All Three Nights of the DNC, So Far,  Why These Union Members and Lifelong Democrats Are Voting Trump,  Voters want change, and nobody in Philly has credibly argued Clinton can deliver and Clinton campaign manager rejects poll numbers as bad as Trump's


Maybe Obama's nonsense speech will have some effect. I don't know.

But so far, as with her career of being a wife to a powerful man,  #ShesHasntDoneAnything.

When you listen to Hillary Clinton’s acceptance speech tonight — seriously, America, why? — expect to hear a lot of compassionate talk aimed at working Americans. Specifically, about the Democratic Party’s plans to raise the national minimum wage to $12/hour, force companies to offer paid parental leave, double-down on ObamaCare, expand Medicaid, and push for greater education subsidies.
Then, ask yourself: Are these policies going to make life less or more expensive for Americans?

As I wrote at the beginning of 2009 after watching DNC operatives with bylines infected with a serious case of what Virginia Postrel dubbed “Depression Lust,” and Tom Brokaw begging Obama for higher gas prices, you and I have a rendezvous with scarcity.

Or as Hillary warned us over a decade ago, “We’re going to take things away from you on behalf of the common good.” 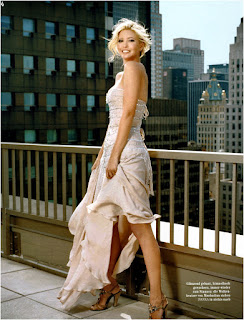 Chelsea or Ivanka? Whether Ivanka or Chelsea, America’s next first daughter will hold unusual power. This doesn't change my take on the election.

THE SEVEN STAGES OF BERNIE’S SUCKERS: “You poor saps. You went to bed with Bernie, and woke up with Hillary.” With many of Bernie's supporters thinking about Jill Stein, she has suddenly become a target of unfavorable media attention: The Boston Globe: A new low for Jill Stein and Salon: Jill Stein’s Ideas Are Terrible. She Is Not the Savior the Left Is Looking For. Bernie's Brown Shirts are not in a good mood: Dems in Disarray: James O'Keefe Trolls Berniemaniacs By Posing as a Hillarymaniac and JAMES O’KEEFE ASSAULTED – THROWN TO GROUND During Undercover Op at DNC and One of Clinton’s most aggressive surrogates, super PAC maestro David Brock, was chased through the halls of the Wells Fargo Center by two Sanders delegates after Bill Clinton’s Tuesday night speech, according to a Democrat who witnessed the spectacle. “They were yelling ‘you f—g jerk,’” said the Democrat. Heh!

So this will be the end for a week or so; maybe it will all calm down in a week at the Beach, but I doubt it.  I'll try to keep occasional digs in for the duration, but in the meantime, be sure to check out Wombat-socho's more or less daily  "In the Mailbox" updates, Larwyn's Linx, also more or less daily, and all the other fine sources in the side bar.