So You Thought You Had a Bad Day?


A Georgia man kayak-fishing alone at Panama City, Florida could hear a big engine coming his way, but due to dense fog, couldn’t tell from what direction the boat was approaching. What emerged from the fog must have seemed a bit surreal–an 88-foot, 182-ton Navy hovercraft.

It ran right over him.

U.S. Navy officials with the Naval Surface Warfare Center confirmed that a Landing Craft Air Cushion (LCAC) hovercraft traveling at approximately 35 mph ran over—or flew over, in this case—Matthew Goff on April 14 in St. Andrews Bay, Fla. Navy contractors operating the amphibious assault vessel offered a bloodied Goff a ride to the local Navy base for treatment, but the fisherman declined. He managed to re-board his kayak and paddle back to his launch site at St. Andrews State Park. A friend transported him to a local hospital.

Florida Fish and Wildlife Conservation Commission investigators continue their probe into the incident. Engility Corp. contractors running the boat state they had reduced speed due to the conditions, but were still running at around 35 mph despite visibility of only 50 to 100 yards.

Goff was issued a verbal warning for failure to display the light he had on board his kayak, although that lesson seems a bit redundant in retrospect. Seems like getting run over by a Navy assault vessel provides sufficient insight on proper use of kayak lighting.

No word on whether Goff managed to bag the mackerel he had just landed before the landing craft interrupted his fishing.

Can you imagine seeing this bearing down on you at 35 mph at 30 yards from a thick fog bank? I'm sure that light would have made a big difference. . . 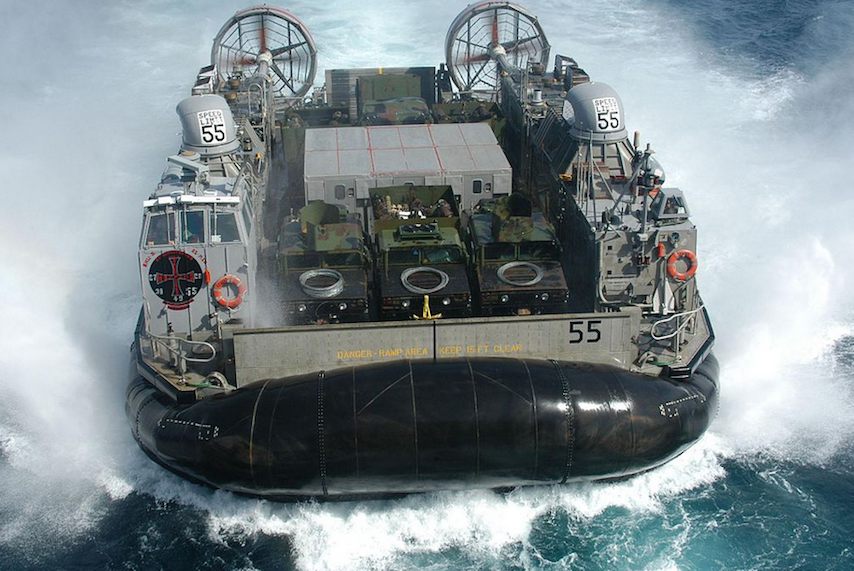