The size and scope of the symbiotic relationship between the Clintons and their donors is striking. At least 181 companies, individuals, and foreign governments that have given to the Clinton Foundation also lobbied the State Department when Hillary Clinton ran the place, according to a Vox analysis of foundation records and federal lobbying disclosures. 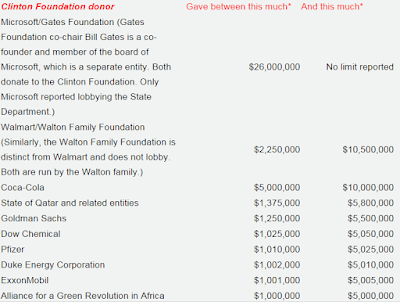 Just to top of the list. This might be enough to tip me to the Apple side of the Apple/Microsoft divide.


That's not illegal, but it is scandalous.

And that's a matter for debate. The Clinton Foundation may not pay the Clinton's salaries directly, but it provides a lot of perks and lifestyle support that most of us would need to pay real money for.


A review of donations to the Clinton Foundation reveals that big labor unions such as the AFL-CIO, teachers unions, and state and county workers unions gave millions of their members’ dues money to the Clintons.

Also of note is the fact that some of the donations the unions gave were labeled as “political activities” and others “grants” meaning that some unions didn’t exactly bother to try to hide the donations behind the label of “charitable” giving.

And labor unions are unique in that they are not giving away their own money, they are giving away the money of their members, whether they approve or not.
Posted by Fritz at 8:59 AM