About that Warm Blooded Fish 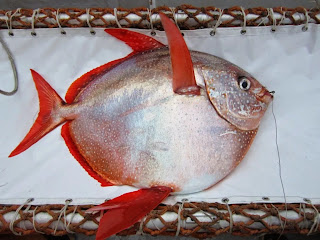 Scientists have discovered the first fully warm-blooded fish - or not


It’s one of the most basic biology facts we’re taught in school growing up: Birds and mammals are warm-blooded, while reptiles, amphibians and fish are cold-blooded. But new research is turning this well-known knowledge on its head with the discovery of the world’s first warm-blooded fish — the opah.

In a paper published today in Science, researchers from the National Oceanic and Atmospheric Administration (NOAA) describe the unique mechanism that enables the opah, a deepwater predatory fish, to keep its body warm. The secret lies in a specially designed set of blood vessels in the fish’s gills, which allows the fish to circulate warm blood throughout its entire body.

Yeah, a counter current exchange system, to keep the gills from cooling the body rapidly. Tuna and some big sharks, including Makos and Great Whites, have them but is it really "warm blooded" the way we are, maintaining a nearly constant core temperature?


Granted, not everyone agrees that “whole-body endothermy” is the best term for the opah’s adaptation. Diego Bernal, an associate professor of biology at the University of Massachusetts Dartmouth, says he believes the opah is still a regional endotherm — it’s just able to keep more of its body warm than other fish.

“It has a very warm core at the center of the body, but it gets cold as you go back into the body or back into the tail or as you go up or down,” Bernal says. A temperature profile of the opah included in the recent Science paper shows that the warmest areas in the opah’s body are the core, including the heart, and the area around the eyes and brain, while the edges of the body are a little cooler.

“I think that [Bernal’s] point is well taken in that ‘whole-body endothermy’ implies that all of the tissues of the fish are going to be elevated in temperature above the ambient temperature,” says Kathryn Dickson, chair of the department of biological science at California State University, Fullerton. “And the fins of the fish, the surface of the eye — a lot of parts are not going to be.” She adds that the term “warm-blooded” may be a bit archaic as well. Even if opah are able to keep large parts of their bodies warmer than the surrounding water, their blood certainly isn’t as warm as that of birds and mammals, she says.

So, provided you change the definition of what warm blooded is, you might consider them warm blooded.

But it is a pretty cool warm adaption.
Posted by Fritz at 5:00 AM