You're Nobody Until You're Hate-Listed by the SPLC. 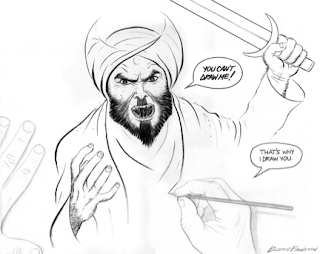 Attacked by Islamic terrorists and listed by the SPLC:


Bosch Fawstin, a former Muslim who won the Muhammad cartoon contest at the Texas free speech event attacked by two gunmen Sunday, will soon be added to the Southern Poverty Law Center’s (SPLC) list of hate groups.
Mr. Fawstin won $12,500 in prize money at the event, sponsored by Pamela Geller’s American Freedom Defense Initiative (AFDI), for a drawing that showed a sword-wielding prophet in a turban shouting, “You can’t draw me.” In reply, a cartoon bubble portrayed the artist as writing, “That’s why I draw you,” Reuters reported.
The SPLC, which already includes AFDI on its annual list of U.S. hate groups, plans to add the artist to its 2016 report, Heidi Beirich, who leads SPLC’s Intelligence Project, told Reuters on Monday.
Ms. Beirich said Mr. Fawstin would have been listed before Sunday’s attack, but the center did not know his location. The organization has since learned that his website is registered in New York City, Reuters reported.
“He’s like the artist of the movement,” Mr. Beirich said, calling his website “virulently ugly.”
“His views, they are hate views,” she added.

Much like being sued by Brett Kimberlin, having your name on the SPLC’s hate list is becoming a badge of honor.

Amusingly for an organization that prides itself on identifying "hate groups", some of the SPLCs listees, such as the Family Research Council have themselves been attacked by progressive gunmen.


As Corkins told the FBI after his arrest, he learned of the FRC online, “It was a, uh, Southern Poverty Law, lists, anti-gay groups. I found them online. I did a little bit of research, went to the website, stuff like that.”

Armed with more than 95 rounds of ammunition and 15 Chick-fil-a sandwiches, Corkinstold the FBI that he chose the FRC as his first target after looking at a list of “anti-gay” groups on the SPLC’s website.

The Family Research Council is still listed on the Southern Poverty Law Center’s“Hate Map” as “anti-gay.”

Some libertarians should sue them to force them to list themselves as a hate group.
Posted by Fritz at 4:54 PM