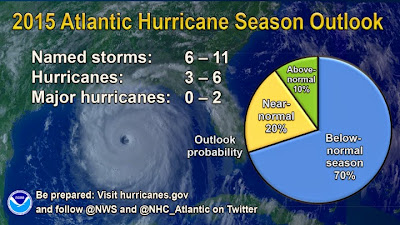 Good news if true, but bear in mind:


“A below-normal season doesn’t mean we’re off the hook. As we’ve seen before, below-normal seasons can still produce catastrophic impacts to communities,” said NOAA Administrator Kathryn Sullivan, Ph.D., referring to the 1992 season in which only seven named storms formed, yet the first was Andrew – a Category 5 Major Hurricane that devastated South Florida.

The prediction for a weak tropical storm system is based on the development of an El Nino in the Pacific, which traditionally suppresses tropical cyclones:


“The main factor expected to suppress the hurricane season this year is El Niño, which is already affecting wind and pressure patterns, and is forecast to last through the hurricane season,” said Gerry Bell, Ph.D., lead seasonal hurricane forecaster with NOAA’s Climate Prediction Center. “El Niño may also intensify as the season progresses, and is expected to have its greatest influence during the peak months of the season. We also expect sea surface temperatures in the tropical Atlantic to be close to normal, whereas warmer waters would have supported storm development.”

But just how precise and accurate are these predictions? Well the data is a little old but: NOAA’s seasonal hurricane forecasts: Do they have any predictive value? 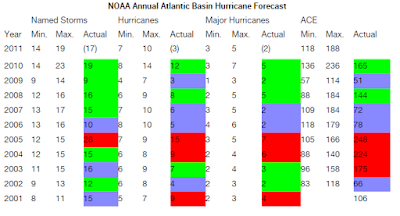 The cells highlighted in green are those for which NOAA was in the money. The blue cells are those where NOAA over-predicted, and the red cells are those where NOAA under-predicted. All told, NOAA has made 39 testable predictions in their seasonal Atlantic Basin Hurricane Forecast over the past ten years (they did not predict ACE in 2001). For each of the years, NOAA’s prediction range is about equal to one standard deviation, which implies a 1/3 chance of being right provided it is near the mean. Thus, if they were going by chance, then they should have had 13 (39/3) correct; instead, they were right 16 times. Unfortunately, because of the small data set, we can only say that they are better than chance at about the 80% level. In addition, they under-predicted 10 times and over-predicted 13 times, so there is a very slight tendency to over-predict. With more data, that trend would probably disappear.

So I would say the predictions have decent accuracy,(the central tendency of many predictions is about on target), but poor precision (the actual likelihood of a given annual prediction being on target is not too much better than chance).

So take that prediction with a few grains of salt, and do whatever preparations you need to for hurricane season.
Posted by Fritz at 2:12 PM