EPA Lays Claim to the Rest of US Land

Great news: that puddle in your front yard is a federally protected waterway

This one has been coming down the pike for a while now, but there was apparently no way to avoid it. Multiple agencies of the Obama administration, primarily under the EPA, have announced their new Waters of the United States rules and added a variety of “bodies of water” to the existing protected waterways. And you’ll never guess what level of federal intrusion this is adding up to.


The Obama administration issued a rule on Wednesday increasing the number of small bodies of water and wetlands that fall under federal protection, a move that has riled some lawmakers, business executives and farmers who say the rule unnecessarily expands federal bureaucracy.
The rule, issued jointly by the Environmental Protection Agency and the U.S. Army Corps of Engineers, is estimated to put about 3% more waterways throughout the U.S. under new federal jurisdiction, which will require more permits for use of those waters and could restrict access altogether, according to the EPA. Agency officials said Wednesday that the rule will protect drinking water supplies for more than 100 million Americans…
“My administration has made historic commitments to clean water, from restoring iconic watersheds like the Chesapeake Bay and the Great Lakes to preserving more than a thousand miles of rivers and other waters for future generations,” Mr. Obama said in a statement Wednesday. “With today’s rule, we take another step toward protecting the waters that belong to all of us.”

The EPA is pushing back against the very loud protests from farmers, energy developers and property owners upset over this potentially massive expansion, claiming that it was always their right to do this under the Clean Water Act of 1972. And if Obama’s explanation of saying that this applied towatersheds like the Chesapeake Bay and the Great Lakes were true, nobody would be terribly upset about it. But it’s that “other waters” portion which he slipped in at the end which caught everyone’s attention. I wonder what he meant by that?


The rule will seek to protect only waterways that have physical features of flowing water, according to a fact sheet about the rule.

The physical feature of flowing water? Depending on the conditions, the slope of the land and how much it rains on any given day, that could apply to pretty much anything. The EPA has already said it will include prairie potholes and isolated stretches of cattails. With the right people interpreting it, that wording would apply to roadside ditches. For their part, the American Energy Alliance described it based on looking like a duck, walking like a duck and quacking like a duck.

Just an example, a more or less random shot of from an airplane flying over the desert southwest of the United States: 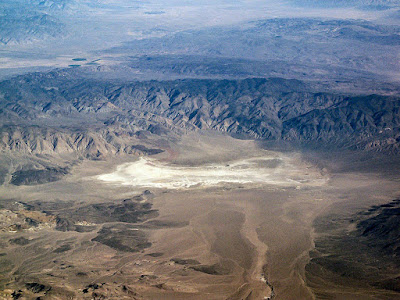 No water anywhere in sight, but the "physical features of flowing water" everywhere, from the dry lake bed, the arroyos that feed it, and even the erosion on the dry hills.

Now, they may not claim everything immediately; that is not their nature, but when it comes to cases, slowly but surely, guess how they're going to decide.
Posted by Fritz at 10:13 AM