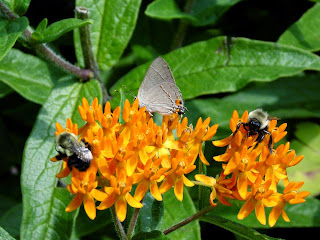 Scientists say bees -- crucial to pollinate many crops -- have been hurt by a combination of declining nutrition, mites, disease, and pesticides. The federal plan is an "all hands on deck" strategy that calls on everyone from federal bureaucrats to citizens to do what they can to save bees, which provide more than $15 billion in value to the U.S. economy, according to White House science adviser John Holdren. 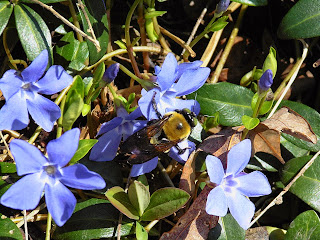 Honeybees are not a native species to the Americas. They were introduced for honey production in the colonial era, and have displaced the native pollinators to a great extent. The recent decline of honeybees has been a boon to the more diverse native pollinators. In recent years, honeybees rarely visit our garden, but a wide variety of native bees, flies, butterflies, moths and even hummingbirds continue to visit our flowers in great numbers, and our flowers still seem to get pollinated. 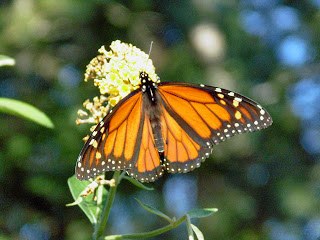 "Pollinators are struggling," Holdren said in a blog post, citing a new federal survey that found beekeepers lost more than 40 percent of their colonies last year, although they later recovered by dividing surviving hives. He also said the number of monarch butterflies that spend the winter in Mexico's forests is down by 90 percent or more over the past two decades, so the U.S. government is working with Mexico to expand monarch habitat in the southern part of that country.


The plan calls for restoring 7 million acres of bee habitat in the next five years. Numerous federal agencies will have to find ways to grow plants on federal lands that are more varied and better for bees to eat because scientists have worried that large land tracts that grow only one crop have hurt bee nutrition. 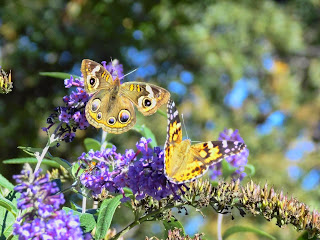 They could bulldoze the federal government portion of Washington D.C. and plant that with meadows and forests. I suspect, however, that they will want to use this as an excuse to put more private lands under some sort of "bees and butterflies" management plans.


The plan is not just for the Department of Interior, which has vast areas of land under its control. Agencies that wouldn't normally be thought of, such as Housing and Urban Development and the Department of Transportation, will have to include bee-friendly landscaping on their properties and in grant-making.

That part of the bee plan got praise from scientists who study bees. 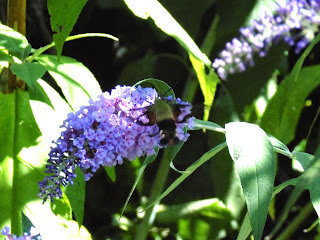 
The administration proposes spending $82.5 million on honeybee research in the upcoming budget year, up $34 million from now.

The Environmental Protection Agency will step up studies into the safety of widely used neonicotinoid pesticides, which have been temporarily banned in Europe. It will not approve new types of uses of the pesticides until more study is done, if then, the report said.

Of course, there is little evidence the neonicotinoid pesticides are responsible for the Colony Collapse Disorder, the sudden widespread death and loss of honeybee colonies.


Research has so far failed to determine what causes it, but the weight of evidence is tentatively leaning towards CCD being a syndrome rather than a disease, as it seems to be caused by a combination of various contributing factors rather than a single pathogen or poison.

But it's hard to fight a battle against a combination of unknown factors, but it's easy, and showy to fight against an unpopular single cause, even if it's not really the cause.
Posted by Fritz at 5:45 PM