Can the FBI Save the Anacostia River?

Probably not, but it's a near certainty they can't do it much more harm:

Could a new FBI headquarters in Greenbelt actually help the Anacostia River?


The 82-acre site in Greenbelt — one of three final locations being considered for a new FBI campus — is currently a parking lot for the Greenbelt Metro station, adjacent to a series of wetlands and Indian Creek, a polluted tributary of the Anacostia River.

Nearby Narragansett Run, which also ultimately feeds the Anacostia, is also badly in need of restoration, having never recovered from sediment and pollution dumped there from mining operations.

The existing Metro facilities, built in 1993 where some wetlands previously existed, have done to little to improve what’s sometimes referred to as the area’s “forgotten river.”

Rain falling on the 3,700-space surface parking lot for the station, along with the pavement for a kiss-and-ride lot and bus depot, mostly runs into the nearby tributaries, adding pollutants and toxins. A wetland constructed to mitigate the Metro construction fizzled when plant and wildlife failed to take hold, leaving a mostly muddy pit. 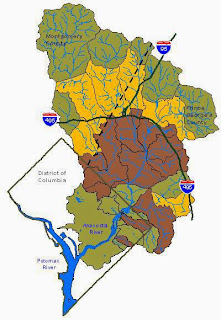 Sound like a fairly typical piece of the urban Anacostia's watershed:


According to the development guidelines put forth by the federal government, whether the new FBI campus is in Greenbelt, Landover or Springfield it will be built to the “gold” standard under the LEED green buildings system.

Beall, whose company has been trying to develop the Greenbelt site for more than a decade, said that with his $2 billion project he plans to take things much further, though it will not be cheap.

Already his company has built a 4.3-acre wetland on the south end of the property at a cost of about $800,000.

Almost a million dollars to restore 4 acres of wetland? That's a lot of clams.


He said he has budgeted $6 million into the project to build an underground system of storm water management canisters developed by an Ohio-based company, Contech Engineered Solutions.