A lot of material today, so lets get going: 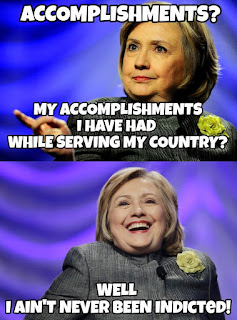 U.S. District Court Judge Rudolph Contreras also set particular targets for the agency to meet each month as it wades through the roughly 30,000 emails totaling about 55,000 pages. (The percentages set for each disclosure can be viewed in the judge's written order, posted here.)

The monthly disclosure essentially splits the difference between the State Department's most recent proposal of releases every 60 days and lawyers for Vice News reporter Jason Leopold, who proposed releases every two weeks.

The State Department initially proposed releasing the vast majority of the emails in a single batch by next January, but Contreras rejected that suggestion, citing the public interest in the materials.

Hillary, of course, is claiming that she would like to release all her emails immediately. That may even be true, since she has already deleted anything that might prove embarrassing to her. The State Dept, though, has it's own interests in mind.

Speaking of deleted email: 2 Of Hillary’s Libya Emails Are Missing. Two doesn't sound so bad, until you realize that these were ones that were already known, by having been released by a hacker:


Sidney Blumenthal emailed Hillary Clinton at least two intelligence reports about Libya which were not included in the trove of 296 emails released by the State Department on Friday.

Clinton has claimed that in December she turned over all official government emails she sent or received from her personal account while in office. In turn, the agency has claimed it turned all Clinton emails related to Libya or Benghazi over to the House Select Committee investigating the Benghazi attack.

But a screenshot of Blumenthal’s email inbox, which the Romanian hacker Guccifer published in March 2013, shows two reports about Libya emailed to Clinton which were not released in Friday’s batch.

Which makes the chance of the emails being released accurately reflecting the truth 0%.

Speaking of Sid "Vicious" Blumenthal, his salary for the Clinton family charity, Clinton.com for his services was a handy 10k a month. Which isn't a lot in government terms, so I's sure it was a part time gig.


Sidney Blumenthal, a longtime Clinton family associate, made $10,000 a month as an employee of the Clinton Foundation while he advised Secretary of State Hillary Clinton, according to a Thursday report from Politico.

According to the report, which cited "multiple sources familiar with the arrangement," Blumenthal was employed by the foundation full-time from 2009 to 2013 when he became a consultant for the organization, which was founded by former President Bill Clinton. It was during this same time that Blumenthal sent Hillary Clinton, now the front runner for the Democratic presidential nomination, what she described as "unsolicited" memos about Libya, where he was trying to arrange business deal.

And where would Clinton.com come up with enough money to pay $120k to Sid for part time work? Funny you should ask, because today it was revealed that FIFA, the world soccer organization recently busted for corruption, paid $50-100k to Clinton.com for "consulting" with Bill:


The embattled Clinton Foundation can add a new name to its long list of donors under scrutiny — the scandal-tarred world soccer federation.
FIFA donated as much as $100,000 to the charity headed by Bill, Hillary and Chelsea Clinton, foundation records revealed, with no further details available.

FBI agents arrested the officials meeting in Switzerland, as the head of the Justice Department described a conspiracy of bribery and corruption in the selection of World Cup host countries and sponsors.

The Clinton Foundation, already under fire for accepting multimillion-dollar contributions from nations including Saudi Arabia, disclosed only the range of the contribution — from $50,001 to $100,000.

Remember from yesterday how Bill formed a shadowy shell company designed to funnel money to him in secret?  It was formed two day after Hillary was confirmed as Secretary of State:


The original Associated Press story said that WJC, LLC, the “shell company” in question, was formed in Delaware in 2008.

It’s more interesting when you find out the specific date. I searched the database of the Delaware Department of State’s Division of Corporations. There is one listing for WJC, LLC. According to the information on file, the company was formed December 3, 2008. President Obama had confirmed Hillary Clinton as his choice for secretary of state just two days earlier, on December 1, 2008.

I am not supplying any conclusions here. I’ll simply note that this is a pattern in the ongoing Clinton controversy. For instance, the domain name for clintonemail.com, Hillary’s private email system, was registered on January 13, 2009, eight days before the Senate confirmed Clinton as the country’s top diplomat. Why the rush to arrange all these complex and secretive business affairs immediately after Clinton’s future as the most powerful Cabinet member was set in motion?

Just in the nick of time to keep that cash flow going behind the scenes. Quite a coinkydink.

Hillary Clinton is an artful dodger when it comes to taking positions on lots of issues, but last Friday she opened a clear gap between herself and virtually every possible GOP presidential candidate. Breaking with sincere progressives such as Vermont senator Bernie Sanders, Hillary went out of her way to endorse the Export-Import Bank, a little-known government agency that guarantees loans so that American corporations can sell products overseas. Its charter is set to expire on June 30 unless Congress rescues it from critics who have long opposed its record of funneling the vast majority of its loans to mega-companies such as Boeing, General Electric, and Caterpillar — all of which can easily secure trade financing on their own.

But Hillary appears to have no trouble embracing such corporate welfare. While secretary of state she shilled for the Ex-Im Bank. In 2009, she appeared in Moscow with officials of the Russian airline Rosavia to tout its pursuit of Ex-Im funding. This is how she put it: “This is a shameless pitch for Rosavia — I’ve said what you wanted me to say, Sergey — to buy Boeing aircraft. Right? The Ex-Im Bank would welcome an application for financing from Rosavia to support its purchase of Boeing aircraft, and I hope that on a future visit I’ll see lot of new Rosavia-Boeing planes when I land in Moscow.”