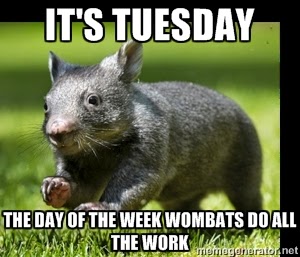 Time to run through Wombat-socho's "Live at FiveSix: 05.19.15" for some news. Better late than never.

Islamic State Claims Full Control Of Ramadi, Capitol of Anbar Province opens the way to Baghdad - The fruits of the Obama/Clinton/Kerry foreign policies ripen like Durian, or even a rotten fish left too long in a bilge.

No Help From State Department For Americans Stuck In Yemen - My guess is that they're mostly Christian missionaries, or businessmen not giving Clinton.com their baksheesh. Compare to: Burundi President Fires Ministers After Coup Attempt, Defense, Foreign ministers sacked; no reason given, US Helping To Evacuate Foreigners - So we'll help foreigners in Burundi, but not Americans in Yemen? I've heard it said "A liberal is a man too broad-minded to  take his own side in a quarrel", but it's never been quite this obvious before. 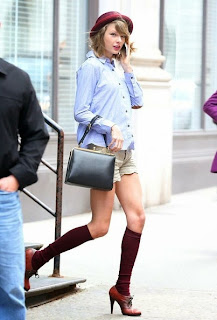 Taylor Swift Tops Maxim’s 2015 Hot 100 - While I have to give her credit for a hell of a publicity machine, she's not even close, despite her lovely legs.

Oregon Governor Kitzhaber Scrapped Functional Obamacare Exchange For Political Advantage - Perfectly explicable. It was all about politics from the beginning anyway.

Brent Bozell Suggests Conservative Journalists Boycott ABC - Throw in CBS, NBC, NPR and PBS and we have a deal. Why should we allow the democrats to pick the battle site?

Did Iggy Azalea Get Plastic Surgery On Her Face? Butterface. . .


“She definitely had some work done on her nose and chin. She already had so much done, I hope she’s not going for the Lil Kim look,” one said.

“The boob job was tasteful because it fit her body but the chin injections/implant looks incredibly fake and she got a cookie cutter nose job,” said one fan.

Supreme Court Rules Against Maryland On Income Tax Credits - But, but, but, taxing twice or even three times is the Maryland way! Sadly this one won't benefit us.

Gov. Jindal Forms Presidential Exploratory Committee - Sure, why not, the more the merrier I always say. But I think he's running for VP.

Tighter Regulation Of Medical Weed Heads For Oregon Senate - Good luck with that. The whole southwest corner of the state runs on pot. The lumberjacks who used to cut trees now cut bud, and the whole of Portlandia is their market. It's about the only thing they have in common. 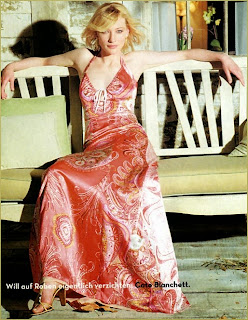 Cate Blanchett: I’ve Never Had Sex With Women - What? They couldn't find a lesbian as talented as you to play a lesbian?

Administration Seeks To End Immigration Enforcement By State, Local Police - Can't let the local yokels interfere in the plan to stack the voter roles for 2016, can we?

Staff Quit Clinton Foundation Over Chelsea - A boulder off the old Hill, eh?

Nikki Finke Sets Up New Site For Hollywood Fiction: HollywoodDementia.com - There should be no lack of material. 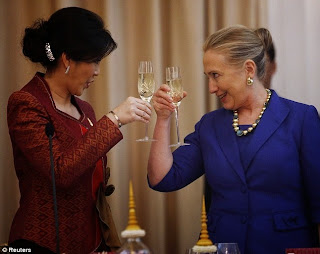 Former Thai PM Banned From Foreign Travel As Her Trial Begins - You mean other countries try their corrupt officials? What a novel approach.


Juncker Denies New Greece Rescue Plan As Negotiations Near End - Is it time to trade stocks for guns and gold?

Eleven Afghan Cops Get Prison For Not Protecting Woman Killed By Mob - Yes, all feminists need a stint in Afghanistan to learn the real truth about human nature.

Is George Stephanopoulos Future -And $105 Million Contract- In Danger? - He should be gone, but given his Clintonian connections, he could probably have blend a litter of kittens on live TV and not be fired.

Saudi Arabia Advertises For Eight New Executioners To Handle Rise In Beheadings - They could a TV show and call it something like "So You Think You Can Execute?" And now, due to the failed Obama/Clinton/Kerry foreign policy, they're shopping for a bomb from Pakistan. And the one thing they do have is enough money. 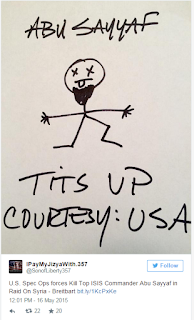 
The Christian Science Monitor writes about a kind of rehab center founded by the Saudis to cure jihadists with art therapy, water aerobics classes, ping-pong, Jacuzzis, and gourmet chefs at the Mohammad bin Naif Counseling and Care Center. The article claims that they have an 88% success rate and that they’re treating 250 reformed terrorists;

Joe For America: Oregon Gun Owners Reject Strict New Gun Bans, Will Not Comply - Portlandia declares war on the provinces, The provinces shrug and ignore them. They have all the guns.
Pamela Geller: Dennis Prager – “Why Pamela Geller May Be The Most Hated Person In America Right Now” - Because she speaks truth to power.
Protein Wisdom: What Happens In Vegas… - What the. . . ?
The Lonely Conservative: Jay-Z Posted Bail For Protesters - But not their damages.
Weasel Zippers: Ferguson Protesters Protest Not Getting Their Checks For Protesting - Bwahahaha!


On May 14, protesters, upset with not being paid their promised checks for protesting, protested outside MORE, Missourians Organizing For Reform and Empowerment, an ACORN organization which had received funding through George Soros to fund the protests.

Megan McArdle: Verily I Say Unto You – Christians Care About The Poor - Dammit Megan, stop being so sensible!
Mark Steyn: Nothing Another 42,000 Airstrikes Can’t Fix - As the administration thows away all progress in Iraq.

Wombat-socho  managed to get "Rule 5 Sunday: The Road To Sin City" done after all.
Posted by Fritz at 9:12 AM