Earlier this month, St. Joseph’s University announced it had suspended its women’s softball program after “a parent and student came forward in late March, alleging freshman had been forced to drink alcohol and engage in sexual conduct when they joined the team in the fall.” Four players were suspended in April after reports of what Philadelphia ABC affiliate WPVI-TV called “allegations too graphic to be outlined.” Now a former player has filed a federal lawsuit:


A former softball player at St. Joseph’s University claims in a lawsuit that she endured sexually charged hazing so bad that she contemplated suicide and was forced to quit the team.
The federal lawsuit by the unidentified plaintiff against the university and softball coach Terri Adams alleges “a widespread and well-known culture of abusive and sexually charged hazing” on the team.
The plaintiff alleges that during a weeklong hazing period in 2013, the player was subjected to demeaning behavior such as being forced to perform a sexually lewd dance, to ask and answer sexual questions and tell sexual stories. She alleges that she saw other freshman players forced to simulate sex acts. . . .
The lawsuit alleges that throughout her freshman year and continuing into her sophomore year, she was given demeaning nicknames, harassed and belittled and was “often reduced to tears and began having suicidal thoughts.” She said she was eventually forced to quit the team.
The suit alleges that officials were aware of the activities and intimidated and threatened her for trying to draw attention to them.

But this A View from the Beach and not WPVI-TV, and we have no problem "airing" the allegations. Back to Stacy: 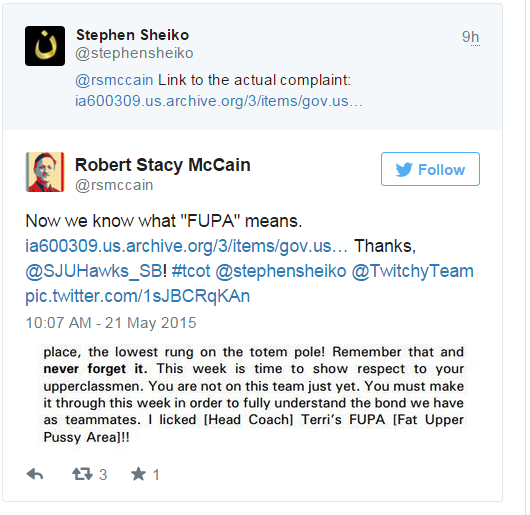 I await with baited breath Sen. Gillibrand's denunciation of the lesbian raped culture, and the breathless descriptions of this by MSNBC, NBC, CBS, ABC, PBS and NPR. Perhaps the victim should carry a soft-ball bat a until she graduates to beat the other girls off with. . .
Posted by Fritz at 7:28 PM