A reminder from Watts Up With That: Winters not Summers Increase Mortality and Stress the Economy


Cold weather kills 20 times as many people as hot weather, according to an international study analyzing over 74 million deaths in 384 locations across 13 countries. The findings were published in The Lancet.


We collected data for 384 locations in Australia, Brazil, Canada, China, Italy, Japan, South Korea, Spain, Sweden, Taiwan, Thailand, UK, and USA.
…
We analysed 74 225 200 deaths in various periods between 1985 and 2012. In total, 7.71% (95% empirical CI 7.43–7.91) of mortality was attributable to non-optimum temperature in the selected countries within the study period, with substantial differences between countries, ranging from 3.37% (3.06 to 3.63) in Thailand to 11.00% (9.29 to 12.47) in China. The temperature percentile of minimum mortality varied from roughly the 60th percentile in tropical areas to about the 80–90th percentile in temperate regions. More temperature-attributable deaths were caused by cold (7.29%, 7.02–7.49) than by heat (0.42%, 0.39–0.44). Extreme cold and hot temperatures were responsible for 0.86% (0.84–0.87) of total mortality.
…
Most of the temperature-related mortality burden was attributable to the contribution of cold. The effect of days of extreme temperature was substantially less than that attributable to milder but non-optimum weather. This evidence has important implications for the planning of public-health interventions to minimize the health consequences of adverse temperatures, and for predictions of future effect in climate-change scenarios. 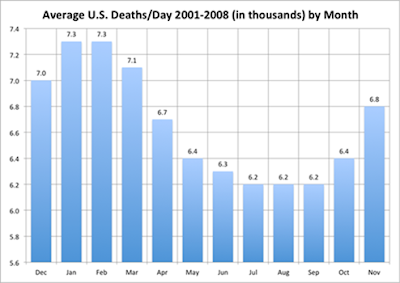 Literally thousands more people die each day in colder times of the year compared to warmer times. Why do you think old farts move to Florida?

Opponents of global warming are literally rooting for more people to die.

Yes, summer in Maryland is hot and humid. But a few days of that in summer without air conditioning is a lot more survivable than a few days without heat in  winter.
Posted by Fritz at 5:00 AM