Derailed Amtrak train was traveling at more than 100 mph


An Amtrak train that derailed in Philadelphia on Tuesday night was apparently traveling at more than 100 miles per hour at the time of the crash, according to The Wall Street Journal.

Amtrak Northeast Regional Train 188, which was en route from Washington, D.C., to New York City, reportedly approached a tight curve at Frankford Junction at 100 miles per hour. The Federal Railroad Administration lists a speed limit for that section of track at 50 miles per hour, the Journal reported.

According to the newspaper, Amtrak officials have already told their employees that they believe speed contributed to the accident.

Democrats rushed to blame the wreck on insufficient funds before the cause of the crash was established.

“Cutting the funding drastically does not help improve the services at Amtrak,” said Rep. Nita Lowey (D-N.Y.) on Wednesday.

From the look of the scene in this photo, the accident occurred in a region of the track where a tight curve, not lousy track, limited the speed of the train: 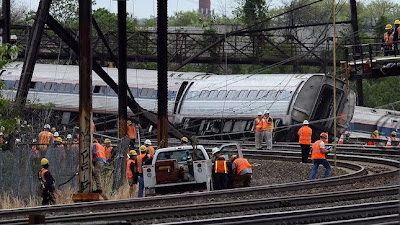 Another song my dad sung: