A group of boaters out for a day of fishing Monday near Annapolis ended up being the ones plucked from the water.

Seven people were aboard a 21-foot boat in Whitehall Bay just south of the Chesapeake Bay Bridge when their boat ran aground on a sandbar. Then, suddenly, they were hit by a wave and the boat capsized. 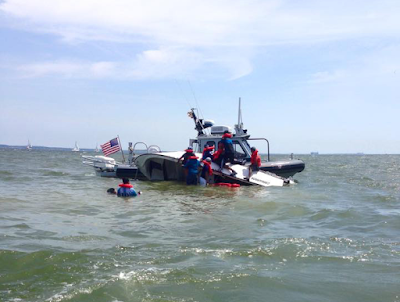 I can see that happening pretty easily on our local sandbar, if the wave are up.


Candy Thomson, spokeswoman for the Maryland Natural Resources Police says some NRP officers were on their way back from a Memorial Day wreath-laying ceremony in Annapolis when they spotted the boaters in the water.

Thomson says the group appeared shaken up by the experience, but there were no serious injuries. And initial reports indicate everyone had their life jackets on “which is the number one rule of safety” Thomson says.

Yep, as it should be, but it's a good thing that our water temperature is up in the 70s and is tolerable for an extended period.


The boat did suffer some damage, but Thomson says NRP officers were able to flip the boat right side up and tow it to Sandy Point State Park.

“We didn’t want it out there as a navigational hazard,” says Thomson.

It was the first time the owner of the boat had taken his craft out on the water.

An expensive first run. You should always know your local waters before you hit the throttles. The Bay is only 9 meters deep, on average, and we have lots of shallow water, with shifting sand bars, and the occasional log to worry about.
Posted by Fritz at 1:33 PM