TSA Looks to the Future

While the federal government insists it's perfectly safe to let ebola victims live among us until we are sure their symptoms have begun to manifest themselves, the TSA is doing it's usual job of overreacting to nonexistent threats, in this case, confiscating a belt buckle because it had a tiny replica of an early 50 SciFi style ray gun. 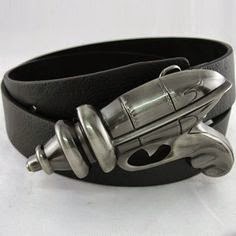 What kind of gun, exactly? From my sometime video producer Sean Malone and owner of the belt buckle: “A 1950s Flash Gordon-style RAYGUN!! A fictional weapon. A child’s toy.”


Malone was able to leave Washington, D.C. with his buckle after protesting long enough to get a supervisor involved who let him keep his little toy ray gun, despite the obvious threat it posed.
She said, “Listen, you can either go back out of security and put this in your check luggage (which I don’t have), or we’ll confiscate it.”
But this is honestly my favorite belt buckle, and I’m me, so – realizing I was speaking with a woman with the brainpower of a block of Parmesan cheese – I looked at her and said, “You understand that this is a belt buckle, right? It is not a danger to the safety of anyone nor is it against the law to carry. I have also traveled with this belt buckle all over the country and it’s never been a problem. So please explain to me how exactly you would justify taking it.”
Her response was to suggest a hypothetical scenario. “What if”, she postulated, “you take this object out of your bag and point it – like a gun – at a police officer? He would have no choice to assume that it was a gun, and take action against you.”

. . .
On his return flight he was not so lucky, nor so early to the airport, and couldn’t afford to fight several levels of TSA authority to maintain ownership of his favorite novelty belt buckle, which again, is obviously a dangerous weapon.

Next they'll be confiscating pop tarts because they can be chewed into the shape of a gun, and used to threaten police officers.