The Tales of Two Immigrants

The big story on the front page of the Washington Post this morning is the weepy tale of Javier Flores, an illegal immigrant from Mexico who was recently deported from the United States, where he had lived for 13 years with his family. It even includes a heart rending picture of Javier standing in a lime field, either crying or wiping the sweat off his face; you decide: 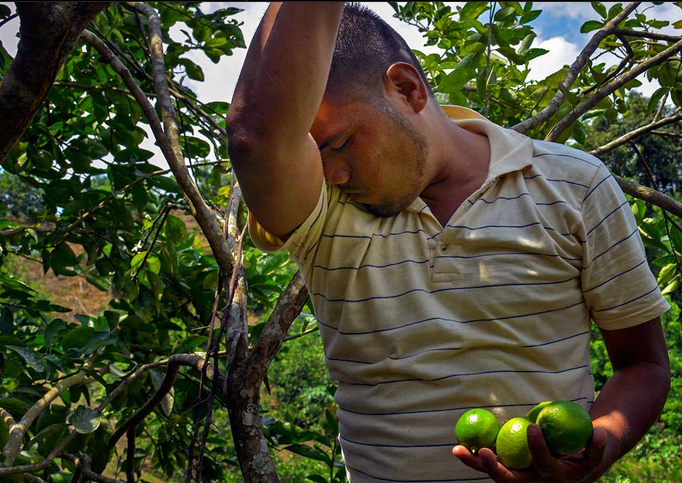 
Javier Flores awoke again to the raspy ring of a water-damaged phone, and he lifted himself out of the hammock that had become his bed. He splashed river water on his face and pulled on his only pair of pants, designer jeans he had been wearing when two U.S. immigration officers stopped him on his way home from work. Now it was a few weeks later, and the jeans were stiff with sweat and caked in mud from the lime groves. They hung off his waist.

He stumbled toward the phone in predawn darkness, stepping over a chicken before answering on the fifth ring. The call was from the family he had left behind in Akron, Ohio. On the other end of the line he could hear his wife and children eating breakfast.
Nineteen days since he had been deported to Mexico, and each one had begun like this.

“Good morning,” said Javier, 31, and when nobody responded he spoke louder. “Buenos dias?” he said. He could make out what sounded like a spoon clanking against a bowl. “Hello?” he said again, and then finally he heard his wife. “Hello?” she said. “Hello? Hello? Are you there?” He tried to respond but she couldn’t hear him, and after a few seconds she hung up.

How much of these last 19 days had he spent waiting? And how much more time before then, home in Ohio, just hoping his circumstances might change? In June, he had watched on TV as President Obama promised he would stop deporting certain kinds of illegal immigrants by the end of summer. The president and his staff said they would bypass Congress by issuing an executive action to help people with clean criminal records and American-citizen children — people like Javier. “This means you!” an immigration advocate had written to him, and even though Javier had already been ordered deported he believed his miracle had come. He would be able to stay with his children, ages 10, 7, 4 and 9 months. He would be able to keep his job at the window factory, where he managed 30 people and paid $850 in U.S. taxes each month. “A perfect case,” the advocate wrote again, and all Javier had to do was wait for Obama to say the things he had promised to say.

Read that again. He'd already been ordered to leave the county, and he ignored that, continued to live here and build his family.


But then July turned into August, and August turned into September, and Obama decided it was more politically prudent to delay his executive action until after November’s midterm elections. So instead of being offered his reprieve, Javier was sent back to the poorest state in Mexico, where the advocate had sent him one final note. “Sorry,” it read. “Terrible timing.”

It's clearly the Republicans fault for not allowing everyone in Mexico who want a better life to move into de Estados Unitos.


Now Javier rechecked the phone cords. He tested the outlet. He wrote down reminders of things he wanted to ask his wife: Had she signed up for food stamps? Had she put antifreeze in his truck?

And look, the wife is getting paid by the government to stay and not work. It's all very sad.

The job he had? $18 an hour job managing 30 other workers (how many of them illegal?) at a window factory in Ohio. I suspect that somewhere, somehow there is a US citizen that that might take that job thankfully.

And the other story?  By way of my brother Ted, who lives in California: Just another illegal alien doing jobs that American won’t do.

Marcelo Marquez allegedly shot and killed a Sacramento County Sheriff’s Deputy and a Placer County Sheriff’s Deputy, and also allegedly shot and wounded a second Placer County deputy and a civilian on Friday. On Saturday, authorities revealed that the suspect — real name, Luis Enrique Monroy-Bracamonte — had already been deported twice from the United States.


Under his assumed name, Monroy-Bracamonte had only run up a modest record of less than a dozen speeding tickets and other traffic offenses, along with visits from a couple of debt collectors. That’s quite a step up to go from there to multiple counts of murder, attempted murder and carjacking. The details of the killings are both chilling and already widely reported, so there’s no need to go over them again here. Assuming that a conviction is obtained, this guy should have a lot more to be worried about than deportation.

But the case of Monroy-Bracamonte is yet another reminder of a larger problem with no obvious solution. It seems that even after having been identified by immigration officials and actually apprehended and deported twice, he was able to return through the revolving door. And having done so, he could get a license, a vehicle, various odd jobs, and the freedom to continue moving around across at least two states and continue conducting whatever “business” it was that he was up to when he crossed paths with the sheriffs. Whatever that business was, I highly doubt it was limited to things such as traffic tickets or he wouldn’t have reacted this violently when confronted by the law.

While I haven't searched the Post carefully, I doubt that the story of Monroy-Bracamonte is likely to be featured prominently in the Post. And certainly no prominent picture of the Deputy Sheriff's wife weeping.

How do we know the Joses from the Luises?  We don't. That's why they're called undocumented.
Posted by Fritz at 2:57 PM