A storm front moved in late last night, and it has been raining steadily more or less ever since. Readers from California can send me their email addresses, and I'll be more than happy to send some back.  Check your box regularly, though, as they have a tendency to leak.

Obamacare Schadenfreude continues to build going towards then next enrollment period:

The left cheers as employers scale back health coverage


Even before the Affordable Care Act was signed into law, its conservative critics warned of the perverse incentive contained within the law which could prompt employers to reduce the health benefits they offered to some of their employees.

“Because of the magnitude of the new subsidies created by Congress, the economics become compelling for many employers to simply drop coverage and help their employees obtain replacement coverage through an exchange,” former Tennessee Gov. Philip Bredesen warned in a 2010 op-ed in The Wall Street Journal.

“Providing incentives for employers to dump their employees into the exchanges is simply shifting the cost burden to taxpayers,” The Daily Signal’s Alyene Senger cautioned less than two years later. “Whatever the employer-dumping study du jour says, it’s not good for Americans who want to keep their employer-sponsored coverage in the new Obamacare era.”

Citing prominent Democrats like Sen. Harry Reid (D-NV), who told a Nevada media outlet that the ACA was a way in which the country could begin to “work our way past” the private insurance model, some conservatives charged that Obamacare was designed to kick start the process of dismantling the system of employer-based insurance.

The law’s backers predictably dismissed the concerns of these and other Obamacare critics. Some derided their criticisms charitably as reflective merely of a misunderstanding of basic capitalist incentive structures. Others, who were perhaps less inclined toward charity, derided Obamacare’s Cassandras as mere kooks and conspiracy theorists.

Ah, that was then, but this now:


In January, the retail outlet Target announced that it would stop providing part-time employees with health benefits and would instead direct them to the health care law’s insurance exchanges. Target joined other large employers like Home Depot and Trader Joe’s, which had already announced similar plans to stop giving part-time workers access to employer-provided health benefits. On Tuesday, those large firms were joined by another even larger employer: Walmart.

26,000 part-time Walmart employees will now have to look to the Obamacare exchanges for their coverage. But for the left, which spent the better part of the last five years dismissing this development as unlikely, this is a “great thing!”

That is, at least, the assessment of former Wonkblogger and current Vox.com analyst Sarah Kliff.


If Walmart doesn’t offer her insurance, the Kaiser Family Foundation’s subsidy calculator shows that she qualifies for a $1,751 subsidy from the federal government to help buy coverage on the exchange. With that financial help, she can buy insurance for as little as an [sic] $7 per month. As a low-wage worker, she gets some of the most generous financial help.
But if Walmart does offer her coverage, it becomes her only option. She doesn’t qualify for federal help and the $7 plan disappears. Walmart’s plan, meanwhile, is way more expensive. The average premium there works out to $111 per month.
For a worker like that, losing health insurance at work doesn’t actually look like a bad deal. Instead, its [sic] a pretty good deal: it gives part-time employees the chance to qualify for way more generous financial help than Walmart would ever offer.

“Yes, there will definitely be some people who earn more at Walmart and get less generous subsides on the exchange,” Kliff conceded. “They could see their premiums increase with this decision. But given that this decision applies only to those who work fewer than 30 hours per week, they are likely lower earners who will be helped rather than hurt.” 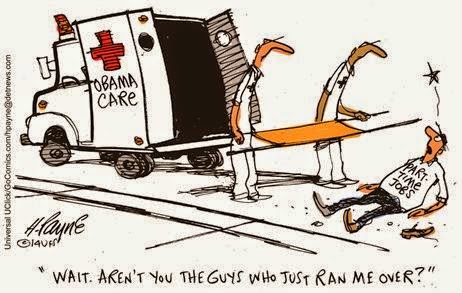 It was always bait and switch, a plan to get to socialized medicine by destroying the current, now fading system.  Omelettes and eggs.


Wal-Mart will no longer provide health benefits for most of its part-time workers. My thoughts, in no particular order:

1) This was expected. Wal-Mart isn’t legally obligated to provide health insurance for part-time workers -- there’s no penalty for dropping people working less than 30 hours a week. We knew that employers would do this, though we didn’t know which ones.
. . .
2) This is going to cost taxpayers some money. Employer health insurance gets a tax subsidy, but that tax subsidy is an employee’s tax rate times the value of the insurance -- so if you have a tax rate of 20 percent, the government was, in some sense, “picking up the tab” for a fifth of the cost of your health insurance. I don’t have data on the household incomes of part-time Wal-Mart workers, but I’m going to assume that in most cases, the government will be picking up a much larger fraction of the cost for an exchange policy.
. . .
8) It’s a good reminder that you can’t just look at the number of people who go on Medicaid or buy an exchange policy; you have to net out the folks who had employer-based coverage and got dropped thanks to the new program. 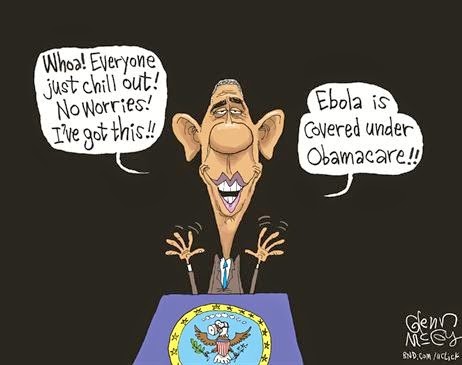 
Kathleen Sebelius used CNN to make a pitch on July 15, 2009, for what would become the Patient Protection and Affordable Care Act of 2010.

“Even though we spend more than any other nation on health care, we aren’t healthier. Only three developed countries have higher infant mortality rates. Our nation ranks 24th in life expectancy among developed countries. More than one-third of Americans are obese.“

And if Dr. Ezekiel Emanuel (brother of Rahm) gets his way, we could fall to No. 107 between Serbia and Barbados. He’s an influential bioethicist and supporter of Obamacare who believes people should die at 75. He advocates suicide at 75.

We're all eggs to be scrambled for the Obamacare omelette.

Obama to Hide Obamacare Rates Till After Election Day…

HealthCare.gov, the online portal where millions of Americans must by health insurance, will not display premiums for 2015 until after the 2014 elections, the Associated Press reported Wednesday.

Obama administration officials told the AP that Americans will not be able to find out if their health insurance premiums are going up “until the second week of November,” which conveniently falls after Americans will go to the polls November 4th.

“Insurers say one big challenge for next year will involve millions of returning customers,” the AP reports. “It’s not really a technology issue, but a time crunch that also coincides with the Thanksgiving and Christmas holidays.”

A whole lot of important things are being held until after the midterms, immigration, Keystone pipeline, doing anything significant about ISIS.

Fact checking Mark Warner and a 'completely made up' Obamacare claim


Sen. Mark Warner, D-Va., earlier this week pushed back on estimates that approximately 250,000 Virginians will lose their health insurance policies as a result of the Affordable Care Act, President Obama’s signature piece of domestic legislation.

That figure is “completely made up,” Warner said this week during a debate with Republican challenger, former Republican National Committee Chairman Ed Gillespie.


Republicans on the committee calculated the figure based on remarks Gray made at a Sept. 10 hearing when he said that approximately 60 percent of Virginians with individual plans renewed early.

"The Committee heard testimony at today's meeting that around 250,000 more Virginians will receive notices this year that their health plans are not compliant with the Affordable Care Act and will be cancelled as a result," Virginia Delegate Kathy J. Byron, the Republican who chairs the committee, said after the hearing.

There are an estimated 400,000 policyholders in the Virginia market. So take 60 percent of all policyholders, apply it to the state’s 400,000 and you now have roughly 250,000 affected Virginians.

That's not made up; that's what we scientists would call a back of the envelope (and with the rise of email more likely the back of a napkin) calculation. Or maybe a SWAG (Scientific Wild Ass Guess). A perfectly legitimate start for a hypothesis.