Love in the Time of Ebola

Well, the good news for today is than nobody new tested positive for Ebola in the United States, at least that anyone will admit to. The bad news is that the CDC appears to be in complete disarray over it.  You may or may not be able to get Ebola by riding a bus or other public transportation with someone with the disease. If you've been a nurse for the index case in Texas, a man who died amid diarrhea and vomit, and you have a slight fever, you can call the CDC and they'll tell you, sure, you can get on a plane, unless your temperature gets over 100.4 F.

The CDC appears to have started this crisis by phoning it in. Well, not really, they used E-mail:


We have "dedicated staff with years of training." They're at the various speciality infectious disease treatment centers, such as the CDC's unit at Emory, or the University of Nebraska Medical Center.

And where were they when ebola came to America?

This is the bureaucratic mindset in practice.

A bureaucrat sends out a memo, an email, and tells people "Follow the below protocols in ebola cases" and considers his job done.

Hey, he sent out a memo. That's his job. Sending out memos. Can't say he didn't do his job.

Here's how a non-bureaucrat views this situation:

We have a serious public health crisis. We have known since March that ebola was back, and in subsequent months the disease infected people at an exponential rate. As full-blown epidemics do.
. . .
No. Back in June, the CDC should have offered hospitals a major crash course in ebola containment. They should not have relied upon their previous memos. They should have actually checked and followed up with hospitals to ensure that people knew at least the basics of containment.

And when Duncan was diagnosed with ebola, they should have sent out a team of experts to oversee the hospital's handling of the matter or simply taken over treatment of Duncan themselves.

Like the US Army after a long period of peace, the CDC responded to the Ebola crisis by fighting the last war, probably HIV, where the disease spread fairly slowly withing a few specific populations (male homosexuals and inject-able drug users), and took years to kill. It will take a while for the CDC to face this crisis too.

Many are calling for Dr. Frieden to resign as head of the CDC.  I tend to agree. My guess is that he got appointed to head the CDC on the basis of his being a bureaucratic infighter; good at selling his agency within the government, and growing it (regardless of necessity) and defending its budget from rival groups. If he has great medical experience, that's probably largely irrelevant to his previous rise within the government. He probably lacks the skills to drive the agency to perform in this crisis. Find someone who really cares, like maybe the American missionary who survived Ebola thanks to US medicine, Dr. Kent Brantly.

And now, just a little Twitter talk from Stacy McCain and the Ace of Spades: 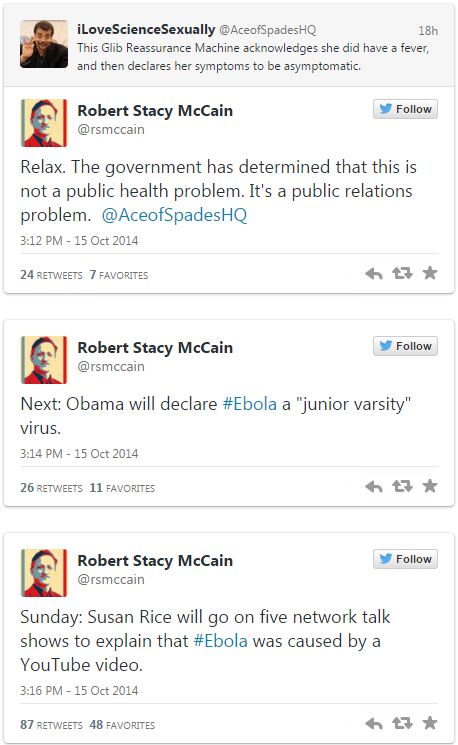