After saying it was "unlikely" that  Ebola would reach the US shores, the we have now had our second, independent introduction of Ebola as Dr. Craig Spencer tested positive in New York, after returning from Guinea where he was treating Ebola patients:

The doctor, Craig Spencer, was rushed to Bellevue Hospital Center on Thursday and placed in isolation while health care workers spread out across the city to trace anyone he might have come into contact with in recent days. A further test will be conducted by the federal Centers for Disease Control and Prevention to confirm the initial test.

While officials have said they expected isolated cases of the disease to arrive in New York eventually, and had been preparing for this moment for months, the first case highlighted the challenges surrounding containment of the virus, especially in a crowded metropolis.

Although monitoring his temperature, Dr. Spencer apparently did not limit his travel and contact with the public since his return, touching off a massive hunt for his possible contacts.


Even as the authorities worked to confirm that Mr. Spencer was infected with Ebola, it emerged that he traveled from Manhattan to Brooklyn on the subway on Wednesday night, when he went to a bowling alley, and then took a taxi home.

The next morning, he reported having a temperature of 103 degrees, raising questions about his health while he was out in public.

Dr. Spencer’s travel history and the timing of the onset of his symptoms led health officials to dispatch disease detectives, who “immediately began to actively trace all of the patient’s contacts to identify anyone who may be at potential risk,” according to a statement released by the department.

It was unclear if the city was trying to find people who might have come into contact with Dr. Spencer on the subway. The Metropolitan Transportation Authority directed all questions to the health department, which did not immediately respond to requests for comment on the issue.

Apparently denial is a river in Africa.

While professor Obama's prediction as to the likelihood of Ebola introduction to the US has now been falsified by events, mine from yesterday, is still in the running:


At this point I think the chances of further Ebola cases from Duncan's initial case are down to about 10%. Small, but not negligible. The chance of future infections from a similar occurrence seem pretty high, though, although a travel ban could lessen if not eliminate the threat. Heaven forbid that the virus become established south of our southern border, because, rationally, everyone in south of the Rio Grande would try to enter the US to get away from it, and to get treated if infected. We already know we can't even begin to stop that flux. 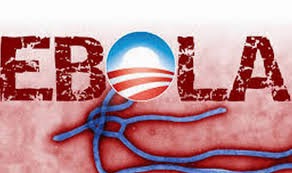