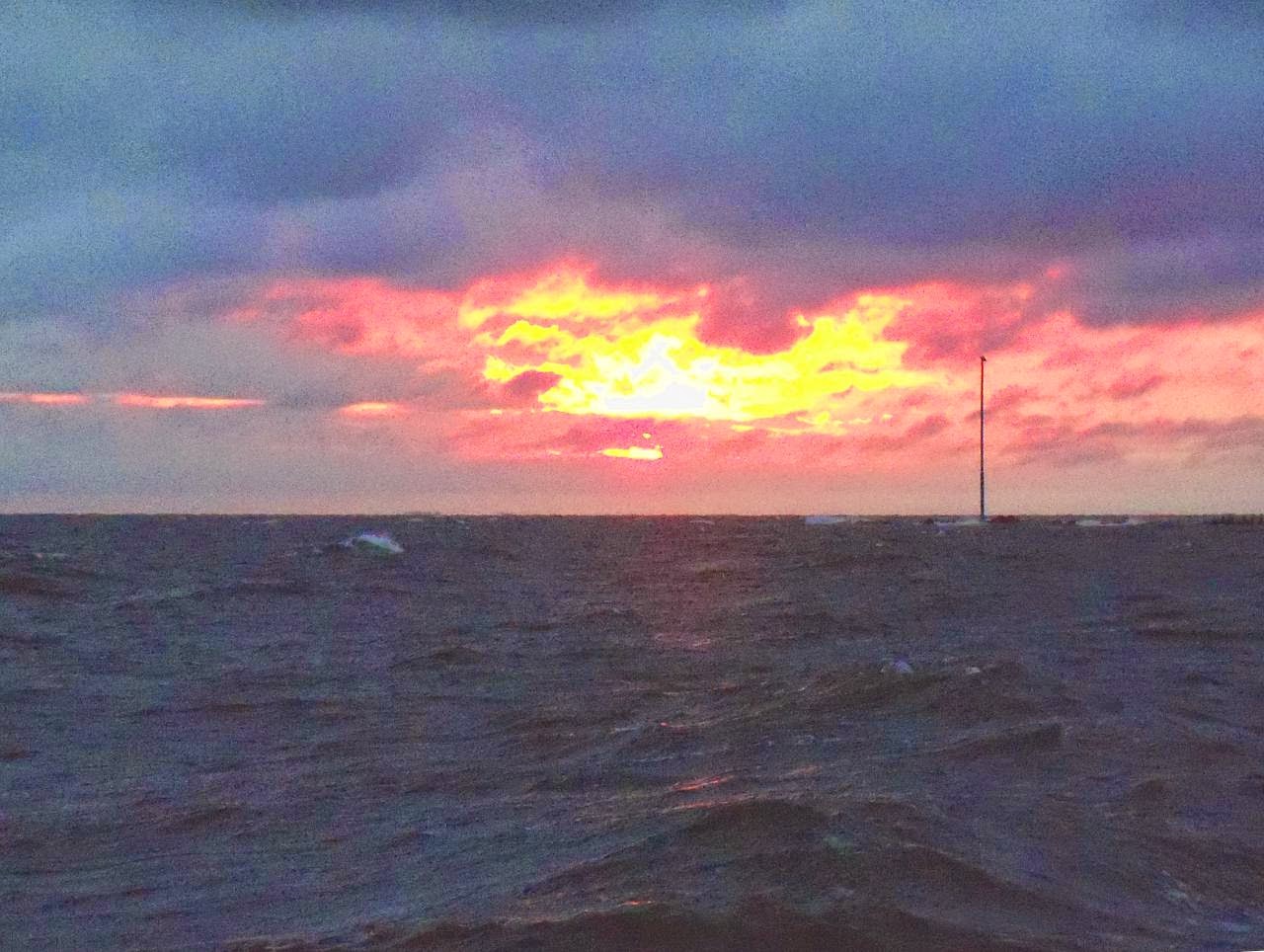 I got a call last night from Walleye Pete asking if I was interested in a free morning of fishing, as he had no trip scheduled, and some of his commercial hook and line quota left to fill.  The weather prediction was NW at 10-15 early, rising later as a nor'easter moved in. We expected to fish Cedar Point, on the southern end of the Patuxent River. 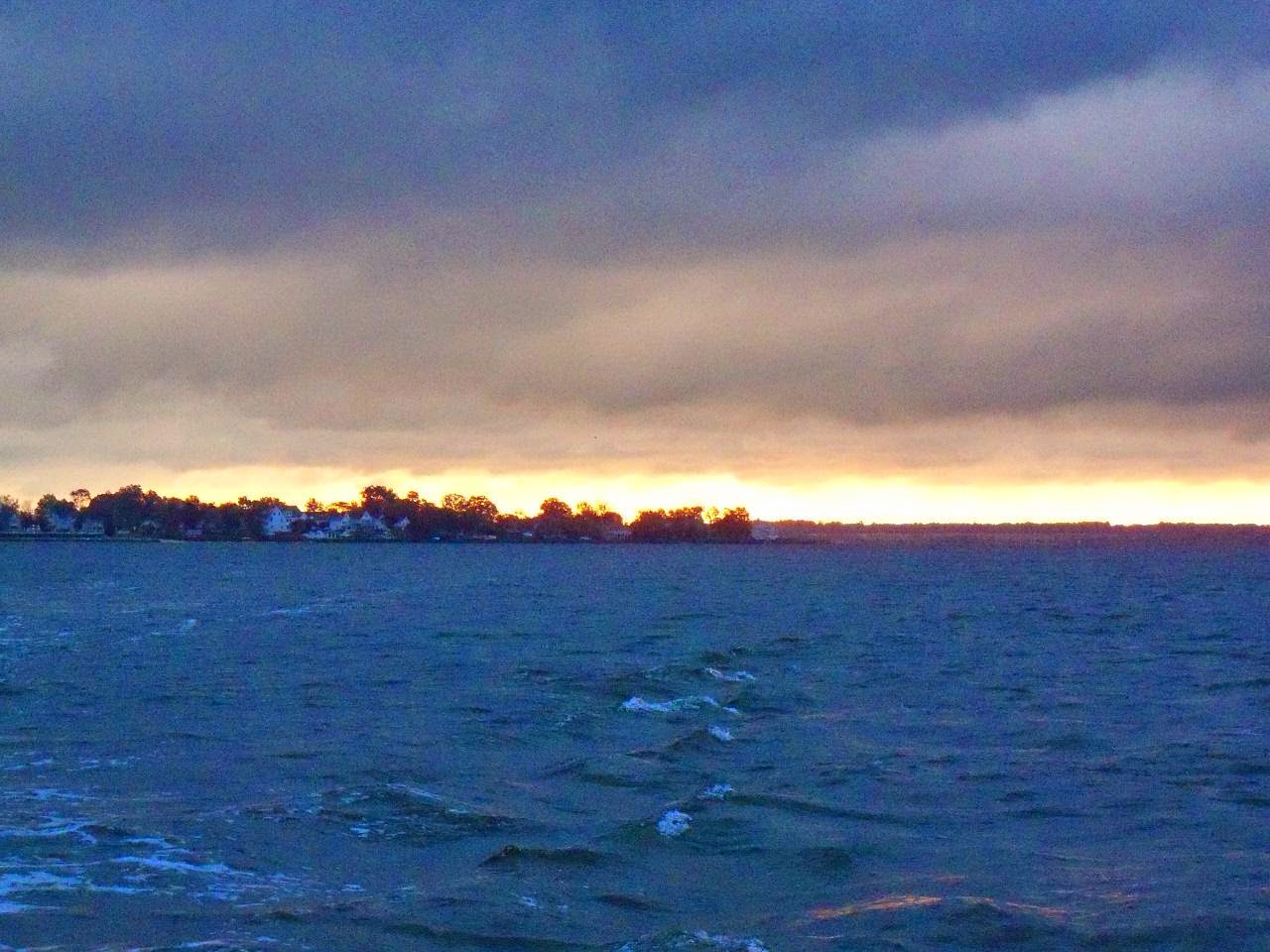 When we met at his boat this morning, the wind was 22-26 and rising, and with intermittent rain. We tried Cedar Point rocks (above) just in time to see a bit of the sunset.  However, we couldn't safely anchor in the swell, and bailed rather quickly, retreating back to try a few locations around Drum Point, and then Solomons. At right, Solomons Island from the water. 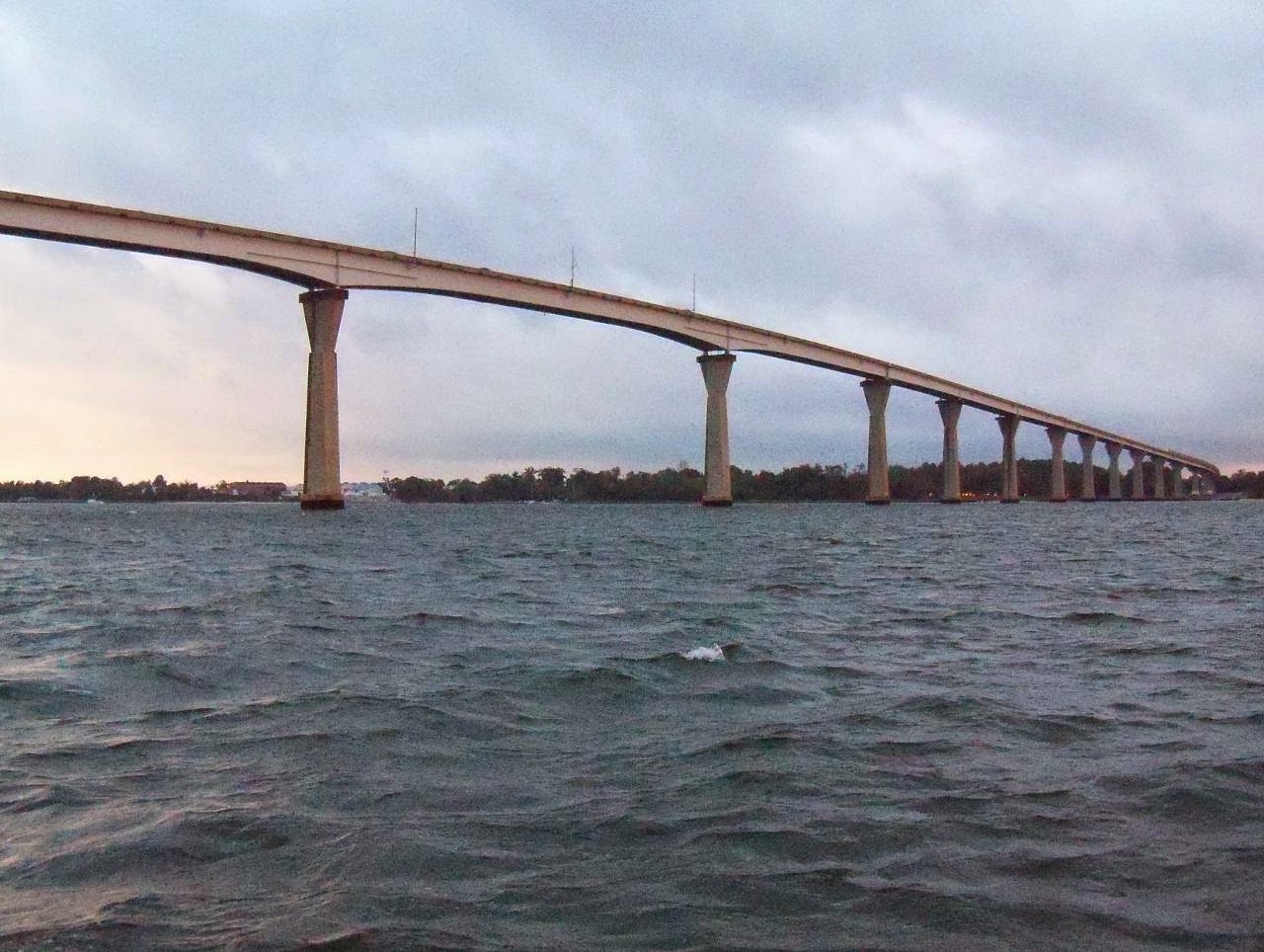 The waves were much less back around in the river, and we tried several different areas without even a tap. 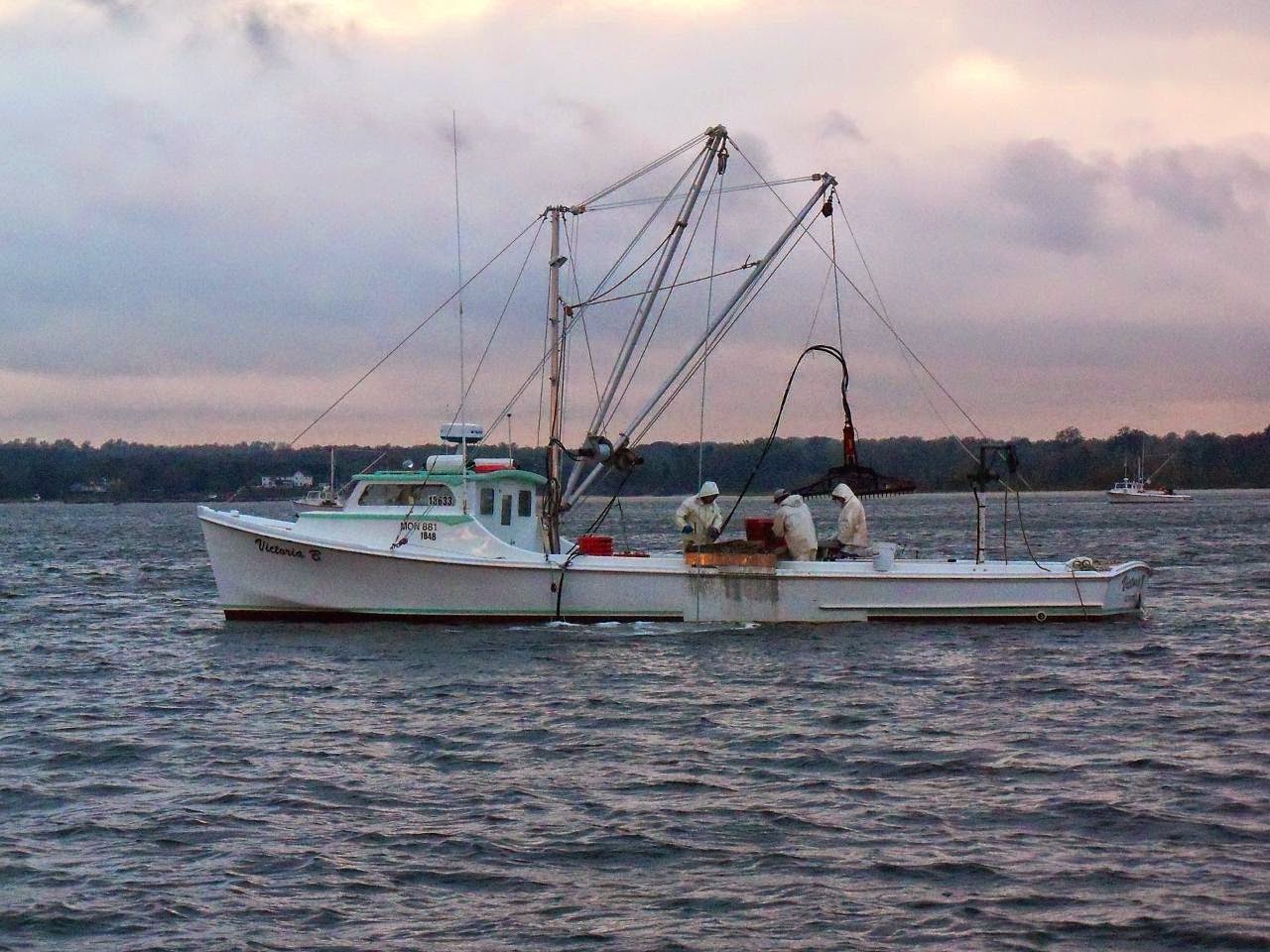 The Patuxent River oyster tonging fleet was out. There were at least six boat scattered about, pulling up piles of shell and oyster with their patent tongs. 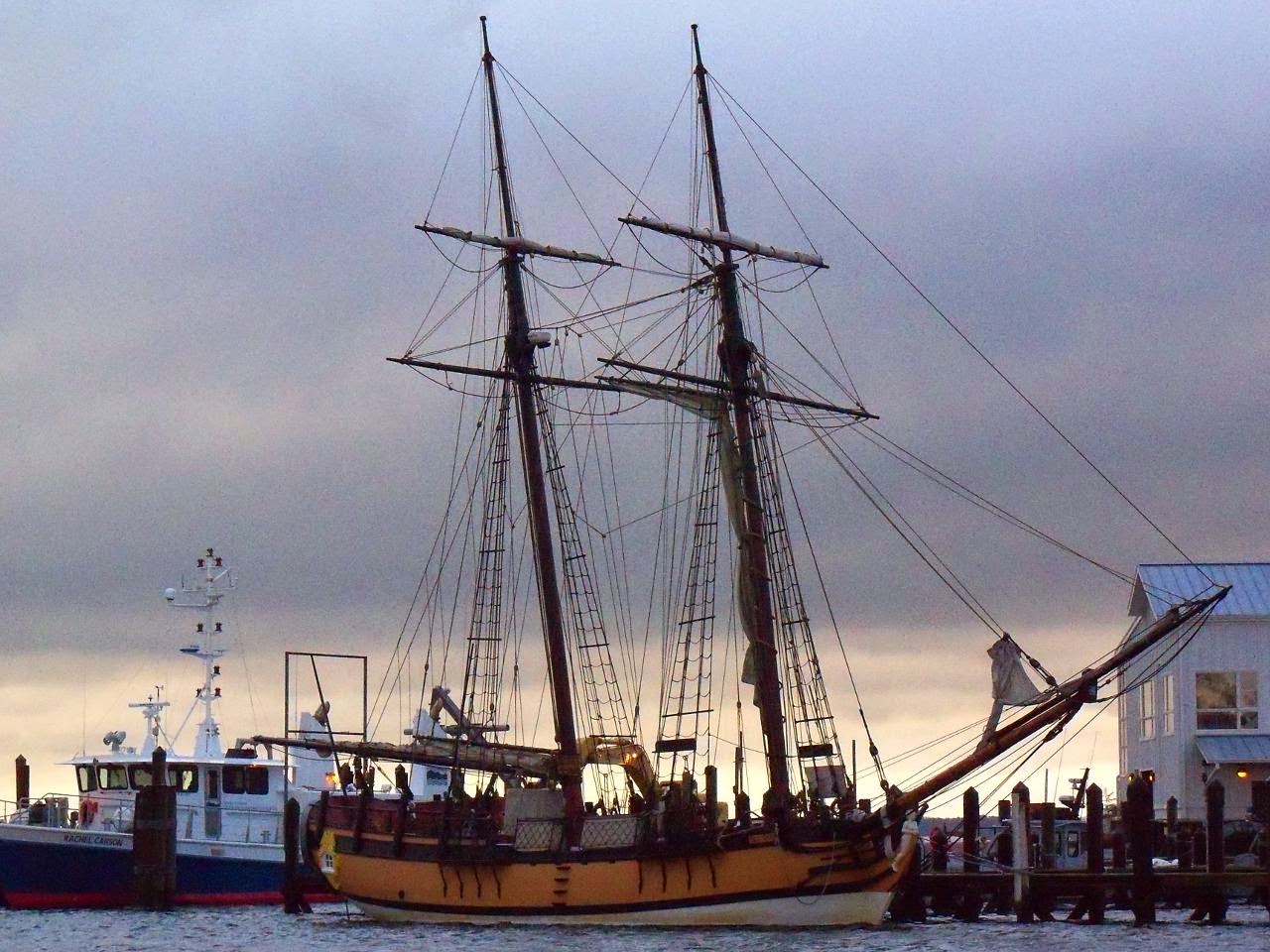 We gave up after a little while and headed in.  Just inside the harbor, at the CBL dock, I spotted this ship, and persuaded Pete to swing around for a picture:


Sultana was built in the yard of renowned Boston Shipwright Benjamin Hallowell in 1767, probably as a yacht. She made one voyage from Boston to England before the Royal Navy purchased her for £292 9s 0d, named HMS Sultana, and sent back to the colonies as a coast guard vessel. At the time of purchase, her lines were taken off and a draught of the hull filed at the Admiralty. She was one of six Marblehead schooners that the Royal Navy bought. 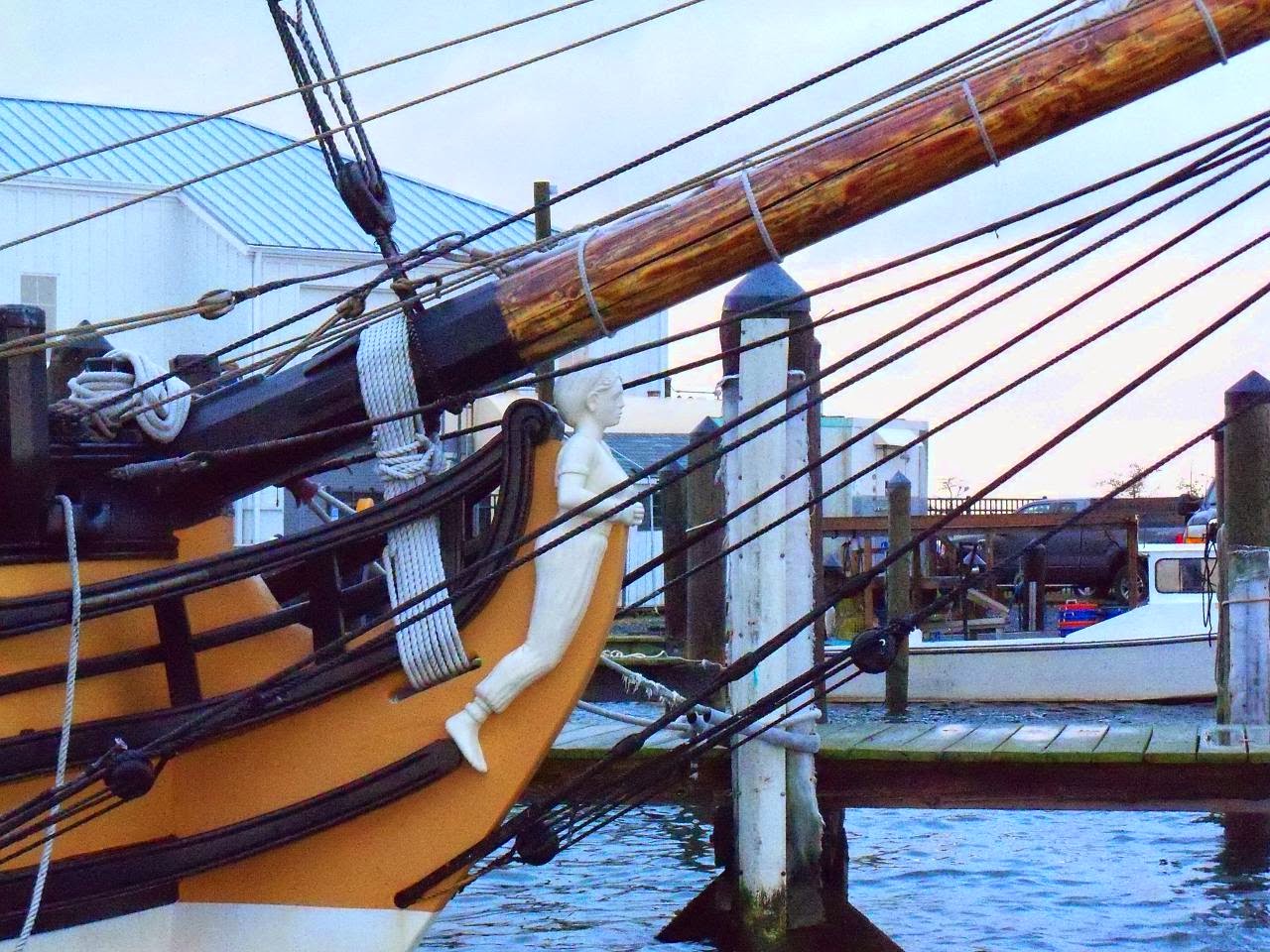 
. . . Sultana's first assignment once she reached Halifax was to proceed to Boston to help land General Gage’s troops in Boston for the protection of customs officials. Following that, she sailed up and down the coast of the Colonies, visiting Rhode Island, New York, Pennsylvania, North Carolina, New Jersey, Delaware, Virginia and many spots in the lower Chesapeake tidewater region. On 10 October 1772 Sultana set off to England.
Sultana was sold at auction in Portsmouth on 11 August 1773 to John Hook Jr. for £85.

A new Sultana, launched in Chestertown, Maryland, in 2001, serves as an educational vessel for schoolchildren as it travels around the Chesapeake Bay. Each year there are public excursions out of Chestertown and other ports. "Downrigging Weekend" in Chestertown is always the first weekend in November. Replica sailing ships from all around the mid-Atlantic participate in sailing excursions and allow the public on board.

The replica vessel is not an exact reconstruction. It has a diesel auxiliary engine and otherwise conforms to Coast Guard regulations in order to carry passengers. The modern version is framed with osage orange and planked with oak; there is a lead ballast keel which the original did not have. She has only four guns, rather than the original eight. All work and can be fired. Within modern safety requirements, however, she was built following traditional methods as much as possible.