A new level of stupid is reached: The EPA jumps the shark, banning – ARGON ?

h/t IceAgeNow - the American EPA has stunned observers, with a list of inert additives for pesticide formulations they intend to ban, which includes the noble gas Argon.

Its hard to imagine a more inoffensive substance than Argon. As a noble gas, Argon is chemically inert – it participates in no chemical reactions whatsoever, except under exotic conditions – there are no known chemical compounds which can survive at room temperature which include Argon. Argon is not a greenhouse gas.

But Argon is incredibly useful to industry – among other things, is used as a “shield” gas. Anyone who welds Aluminium or Stainless Steel will be familiar with Argon, which is used with MIG and TIG welders, to blow oxygen away from the electric welding arc, to prevent oxidative damage to the weld joint.

Any effort to regulate the use of this harmless substance would do incalculable damage to American industrial competitiveness, for no benefit whatsoever.

http://en.wikipedia.org/wiki/Argon
So why on Earth would the EPA plan to ban something as inoffensive as Argon? IceAgeNow has a theory – they think Argon is part of a list supplied by a scientifically illiterate NGO, which the EPA plans to rubber stamp.

If anyone with any real scientific training whatsoever had seen this silly list before it was published, or had taken the trouble to do 5 minutes of research on each entry in the list, to discover how ridiculous and ignorant the inclusion of Argon on a list of dangerous chemicals to be banned really is, then the EPA would not be facing their current very public embarrassment. 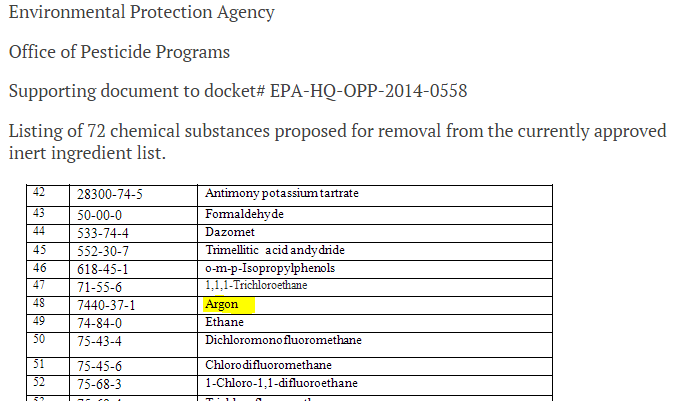 In my former life, as the director of a trace-element analytical lab, we used two instruments to analyze the majority of our samples, an inductively coupled plasma mass spectrometer, and an inductively coupled plasma atomic emission spectrometer.  Both instruments use an argon plasma in the analysis, using about 20 l of the gas (at STP) per minute.  We bought 400 lb dewars of liquid argon, and when operating an instrument daily, used one in about two weeks. Over and over.

Argon constitutes about 1% of ambient air, and as noted above, is really only notable because it does nothing except take up space, and making a nifty hot plasma when stimulated with a varying magnetic field. I can't even imagine a use for it in pesticides except possibly as a propellant, and then, why not use the significantly cheaper nitrogen?

Argon is produced commercially by freezing air into a liquid, and then distilling out the components. It's uses all result in it being released back to the atmosphere.

This strikes me as a stupid cut and paste error, and demonstrates the knowledge and care with which environmental policy is made. Someone need to be laughed at long and hard. And then fired.
Posted by Fritz at 7:56 PM