I'm Back From Fishing 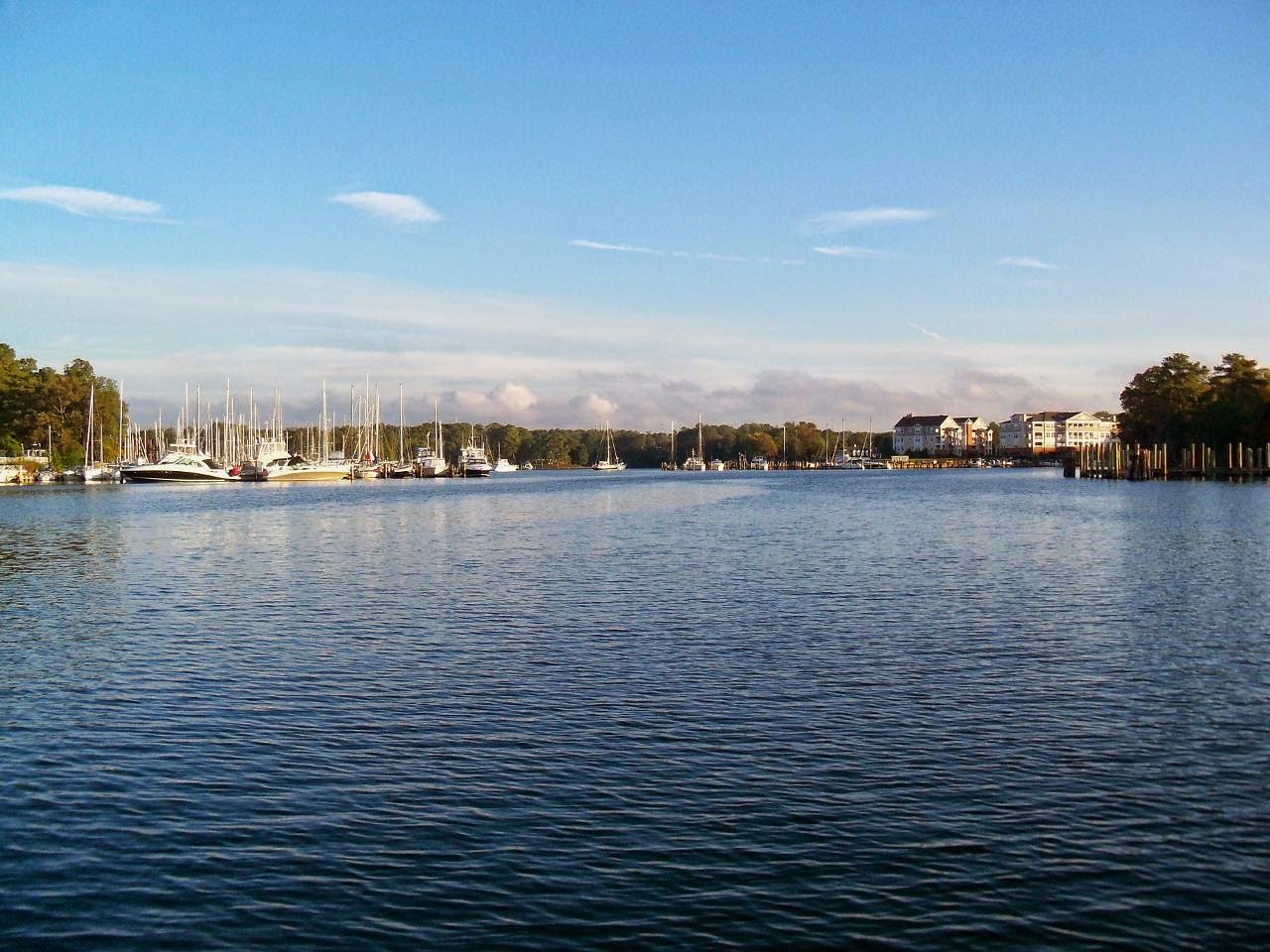 As I wrote earlier, I was going fishing today.  I hopped aboard Walleye Pete's boat in Solomons Island, with 5 other anglers I had never met before at 8 AM. A little later than usual due to high winds over night, and the slack tide early (fishing is better in moving water) 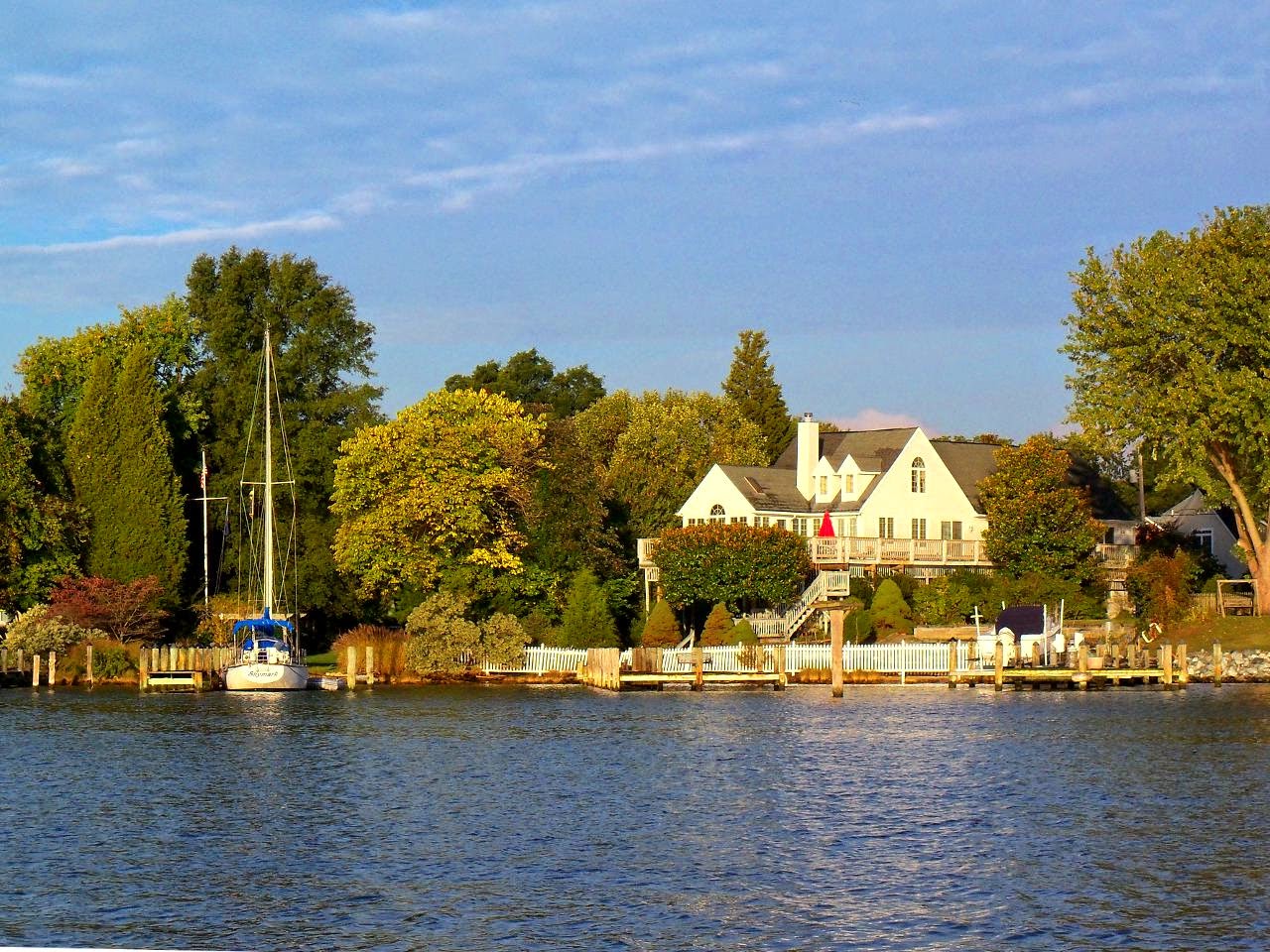 A nice house on the water in Solomons, overlooking Back Creek.  Fall is  just starting to mark the trees and bushes here. 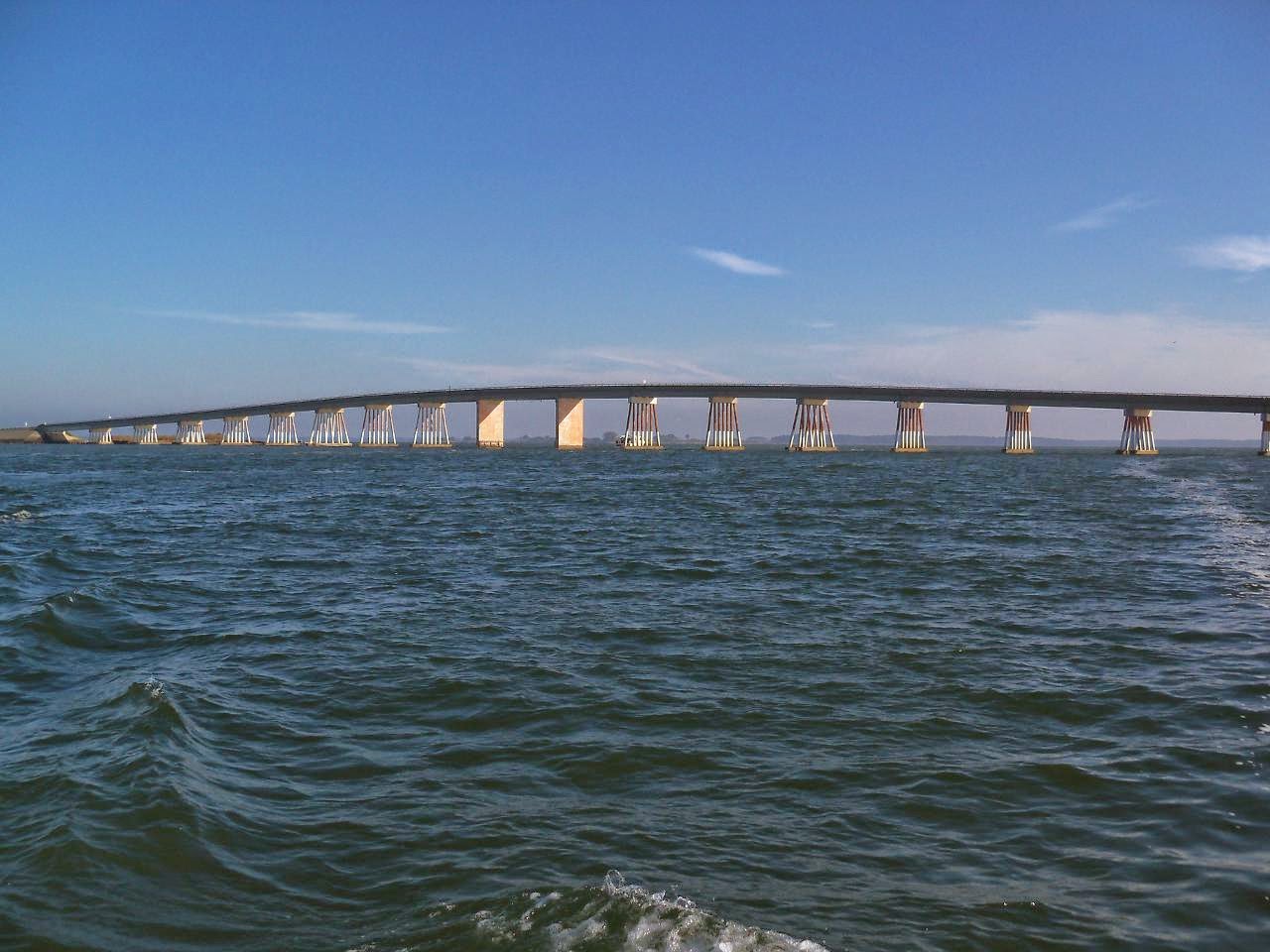 A mid-morning shot of the Lower Hoopers Island Bridge.  We caught a few small stripers each there to warm us up for the later fishing. I also caught the only Bluefish of the day there, which we just had for dinner. 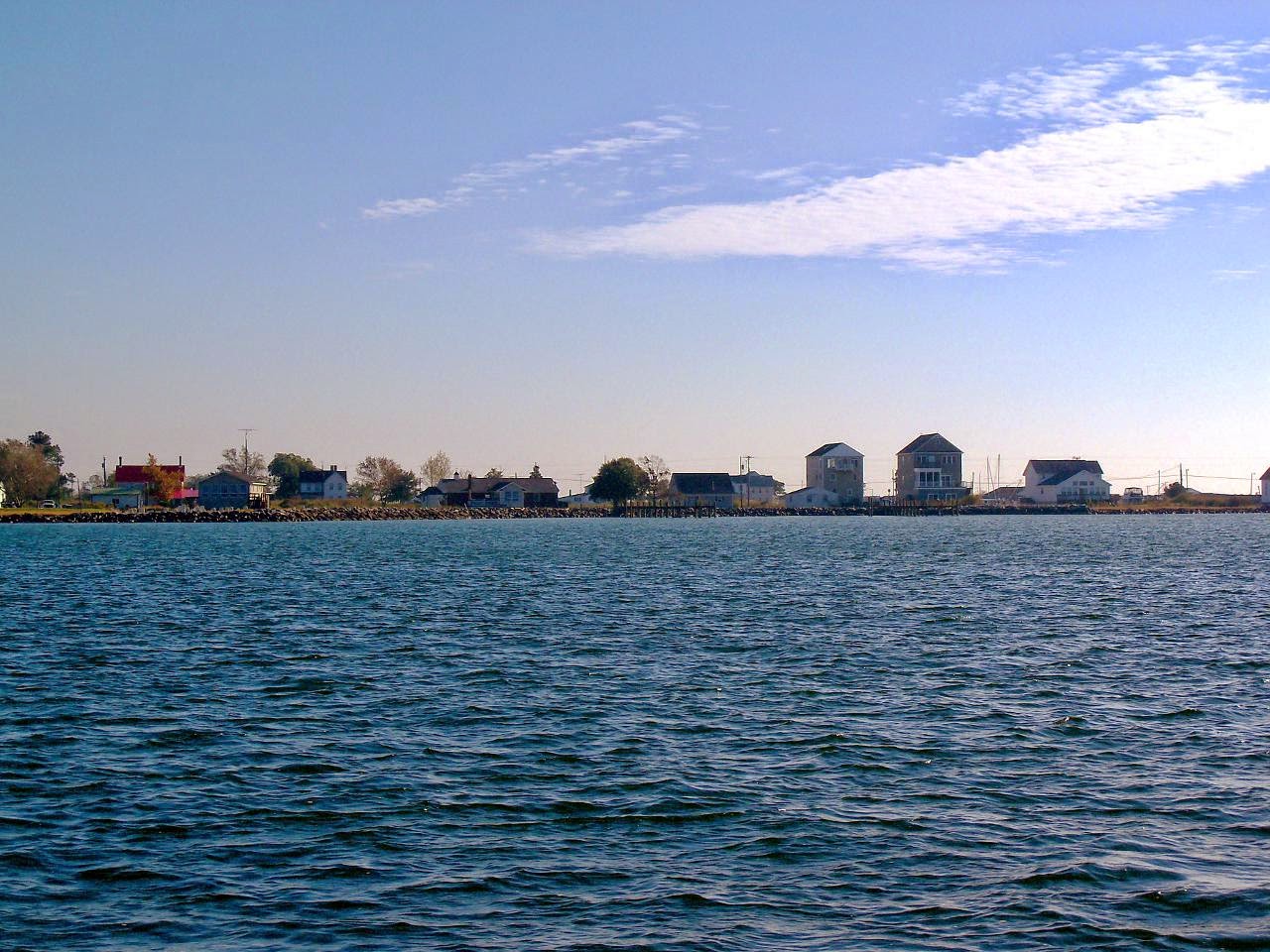 Hoopersville MD from the water.  Pretty much the end of the road. I strongly suspect that the Hoopersville Hoopers provided the inspiration for the Turlocks of Michner's "Chesapeake." 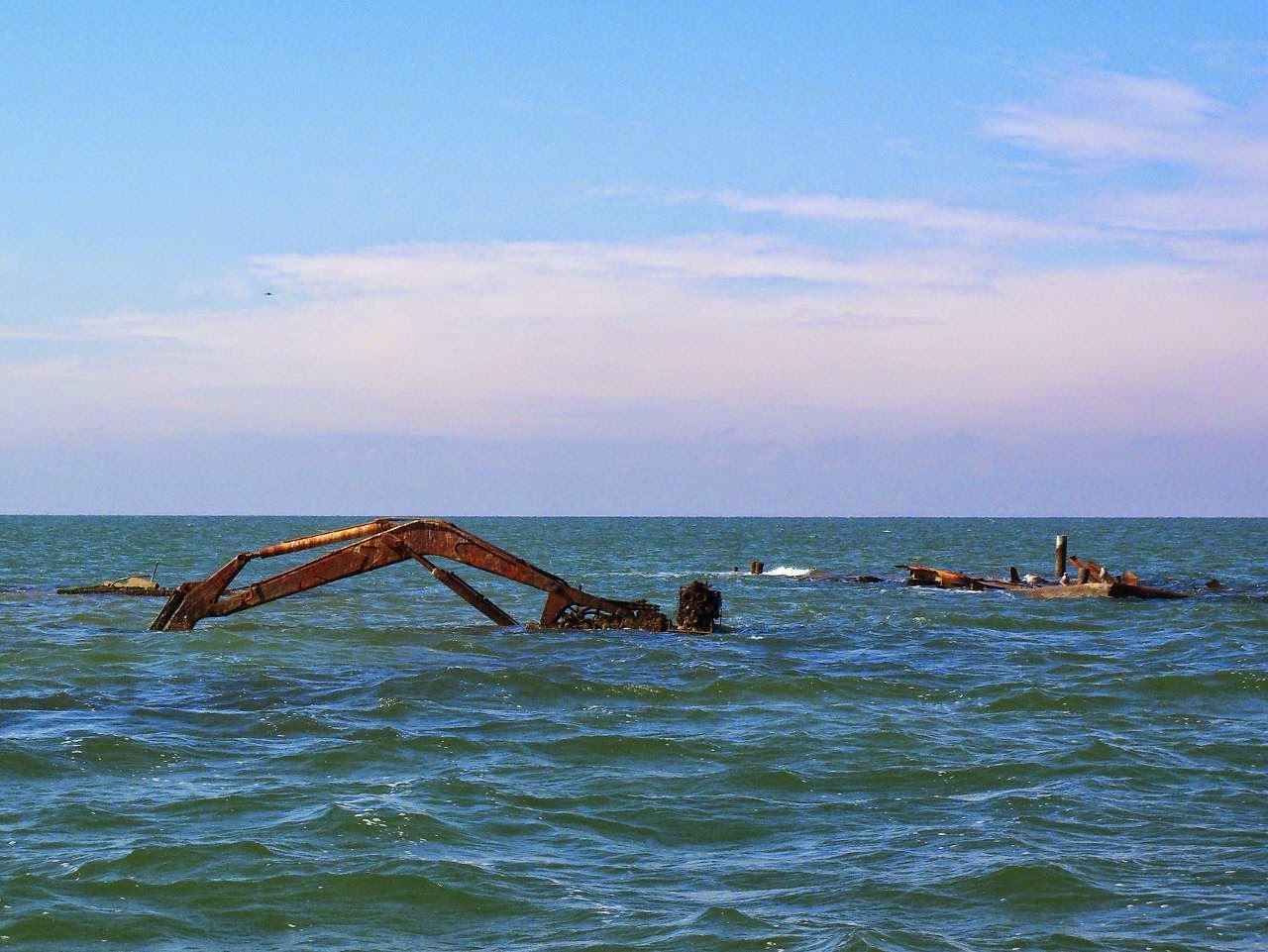 With a stiff east breeze in the morning, we fished the west side of the island, moving down from Hoopers Island to Bloodsworth Island to Holland Island, where I took this photo of the front end load in the water where the last house used to stand.  I have have photos from when the house was there, before it was destroyed by Hurricane Irene. We went as far south as South Marsh Island, a hop skip and a wet jump to Smith Island, the famous watermen community which still speaks an archaic dialect of English. 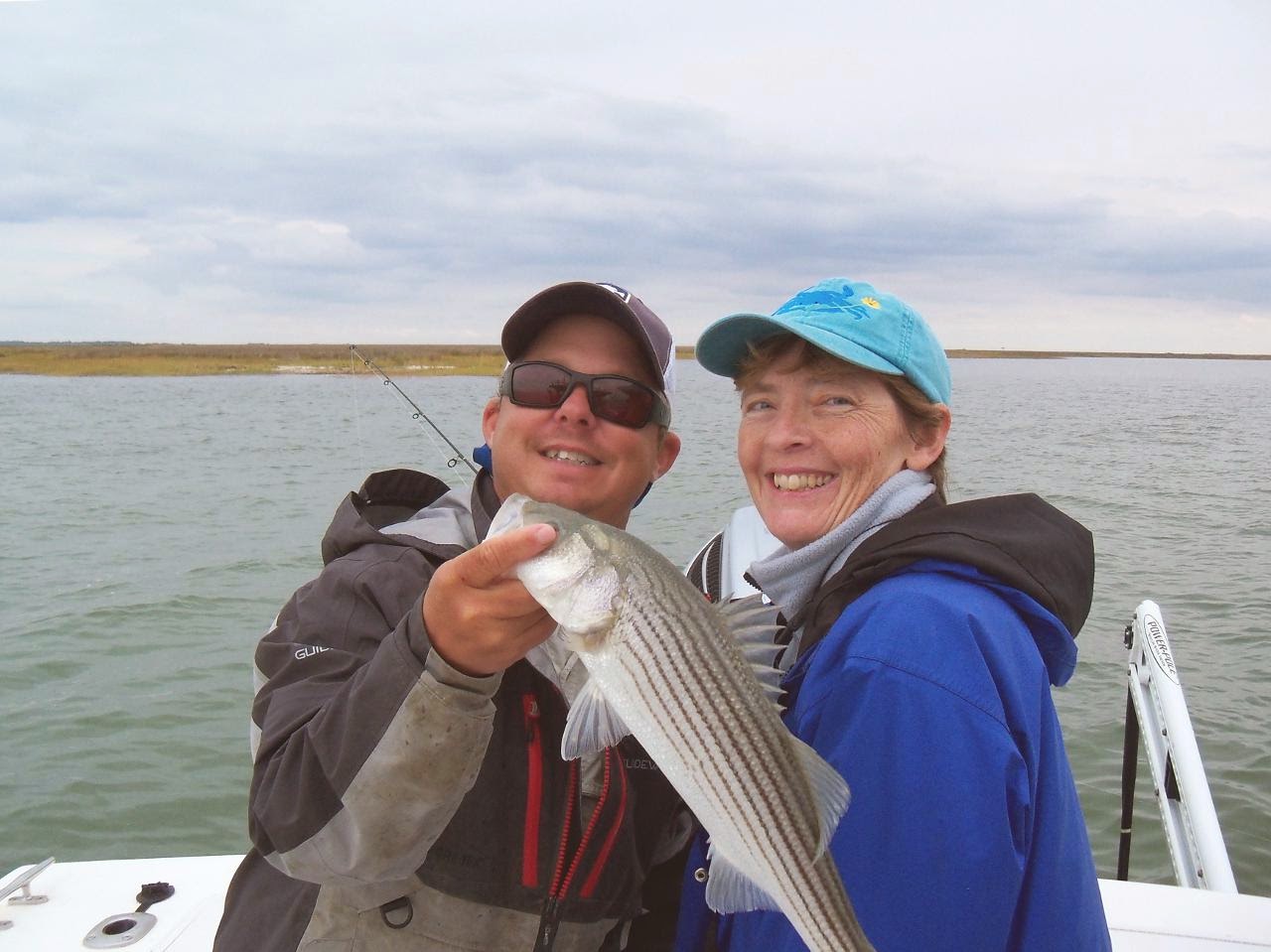 We caught fish at most of the places we tried, if only a few at some. Fishing improved as the tide picked up, the wind let up and the sky clouded over. Here Pete holds one of Carrie's fish with South Marsh Island in the background. 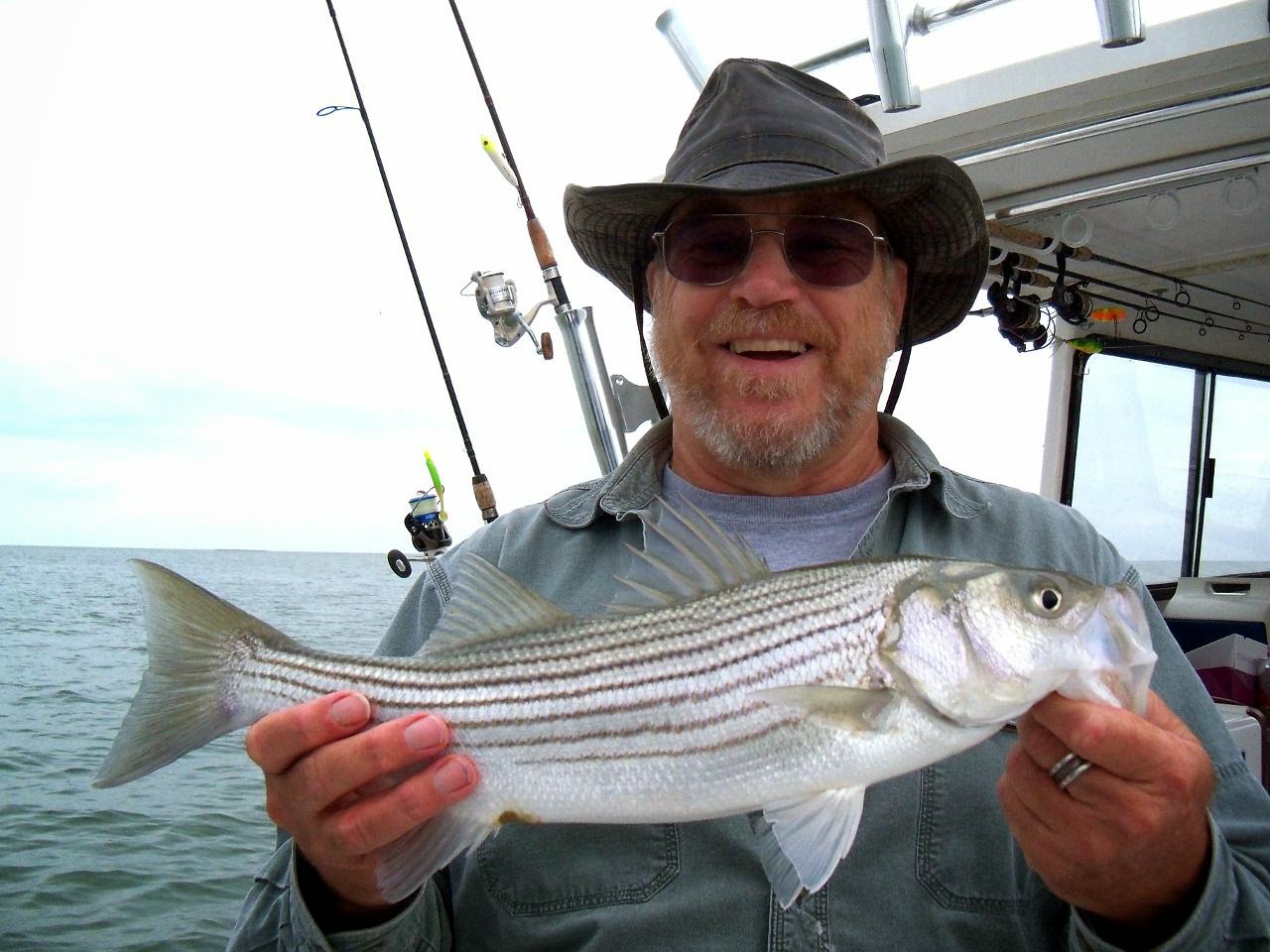 And me with one of mine.  I don't know how many fish were caught total, but my own count was 26.  The legal size for Striped Bass in Maryland is 18 inches, and we had a limit (2 per angler + 1 for the captain) by mid afternoon, and started throwing back keepers, which continued to get better. 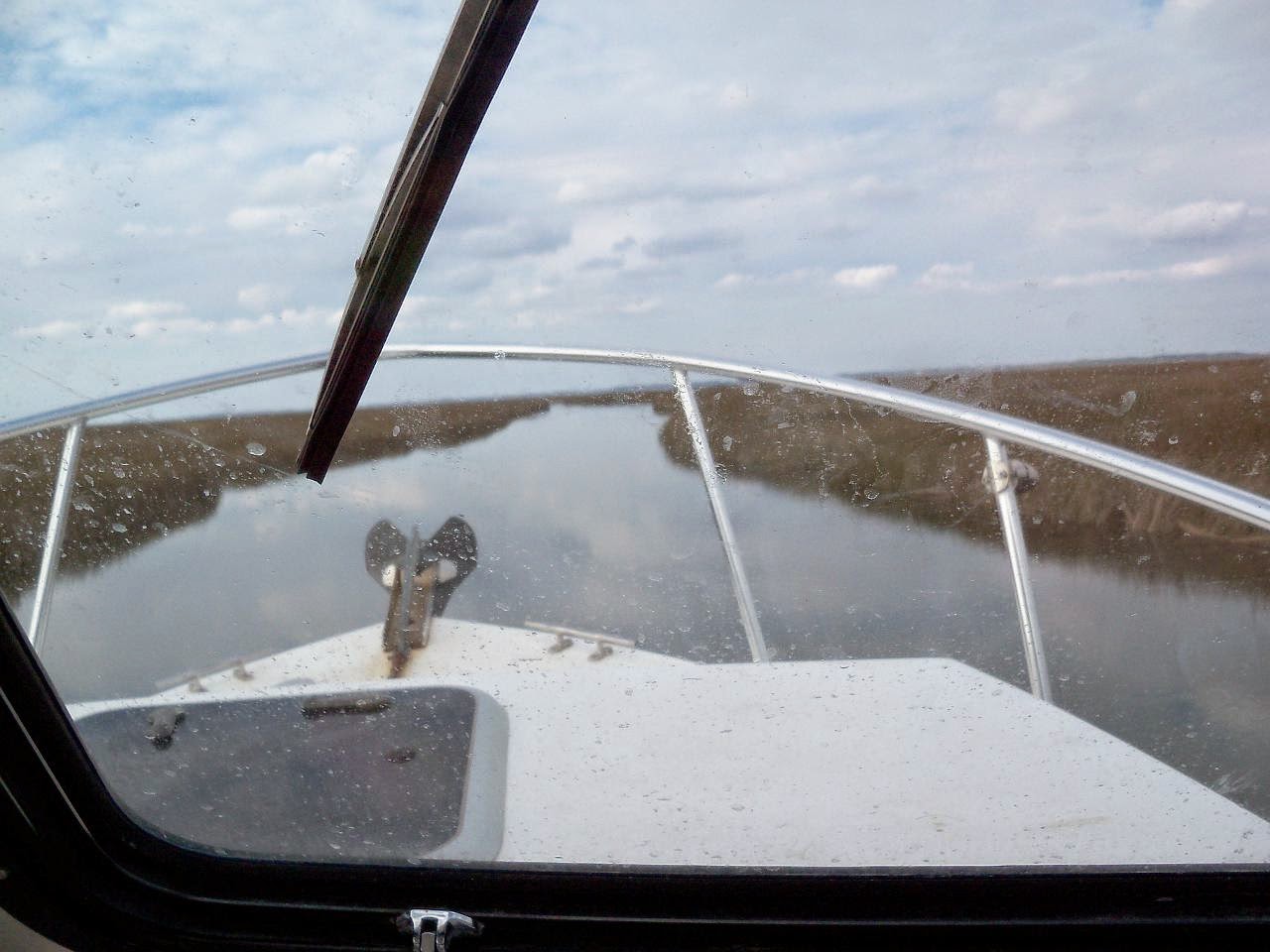 Pete took the short cut through Bloodsworth Island on the way north, an on plane, 30 mph plus ride down a narrow, but deep tidal creek that bisects the island.  It saves several miles to go through rather than around. But it should only be attempted by the experienced. The creek is known as Bootleggers Cut and is reputed to be a route booze smugglers used to hide from revenuers and fish cops during Prohibition. 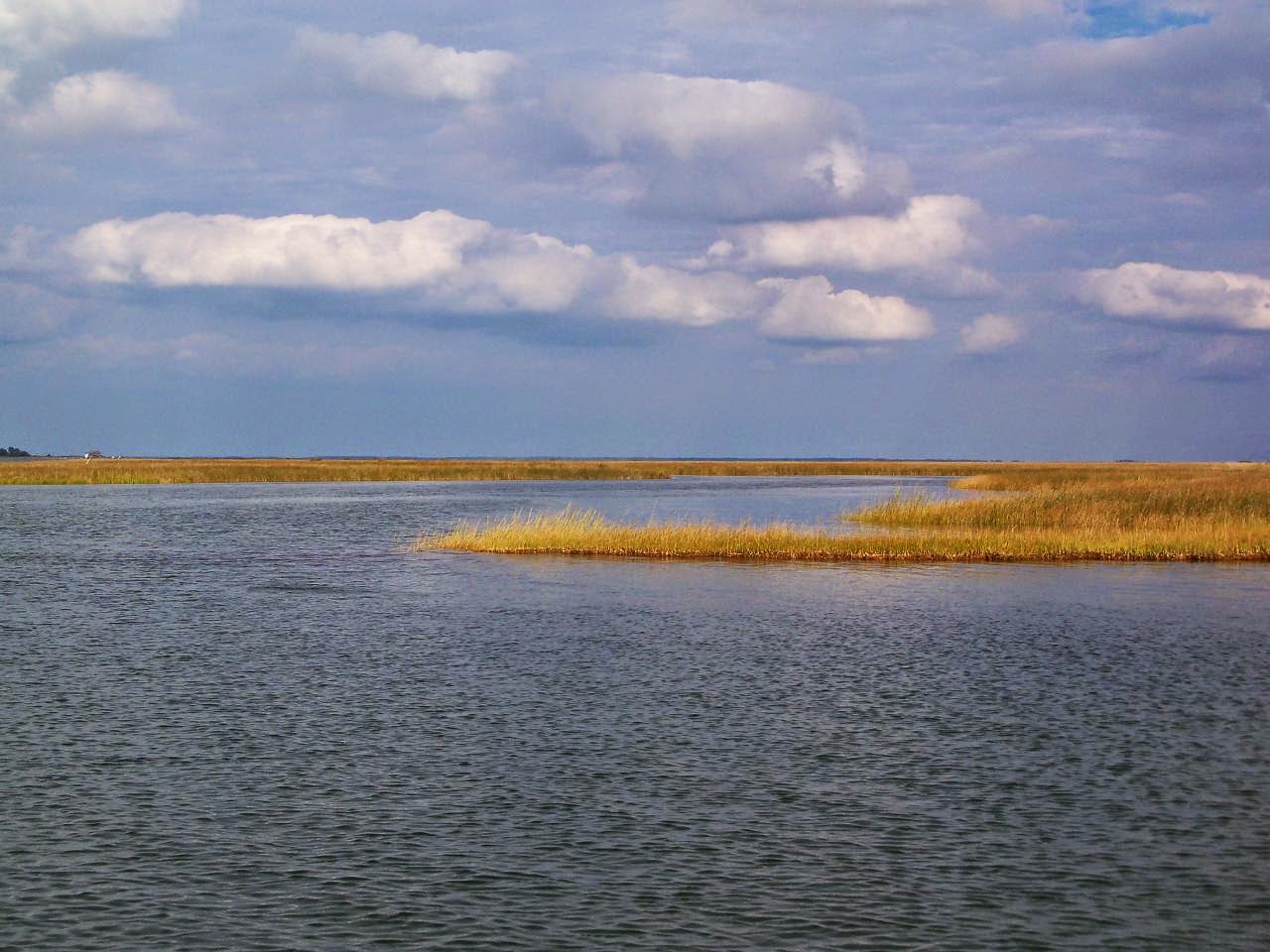 One of the many points we fished at in the setting sun.  At one, that Pete called "Magic Cove" we caught 2 Summer Flounders (small) and 2 Speckled Trout. I stuck to stripers, myself. 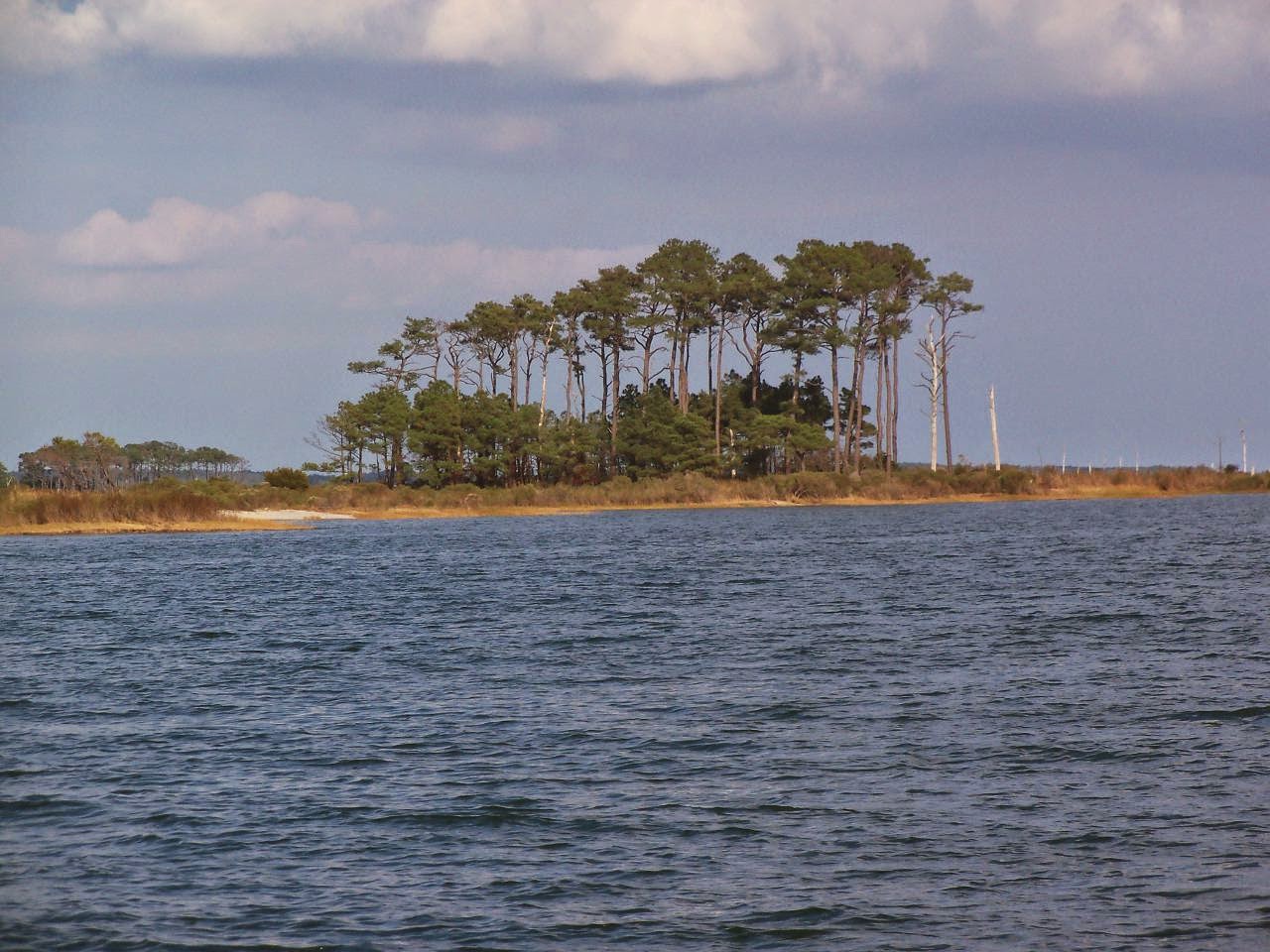 A small clump of trees on Hoopers Island. The binary growth (high tops and low, clearly relatively young trees), seems to indicate that conditions are rarely favorable for trees to get started, and when they are, a bunch start and grow at the same rate.  I saw this in several different place here. 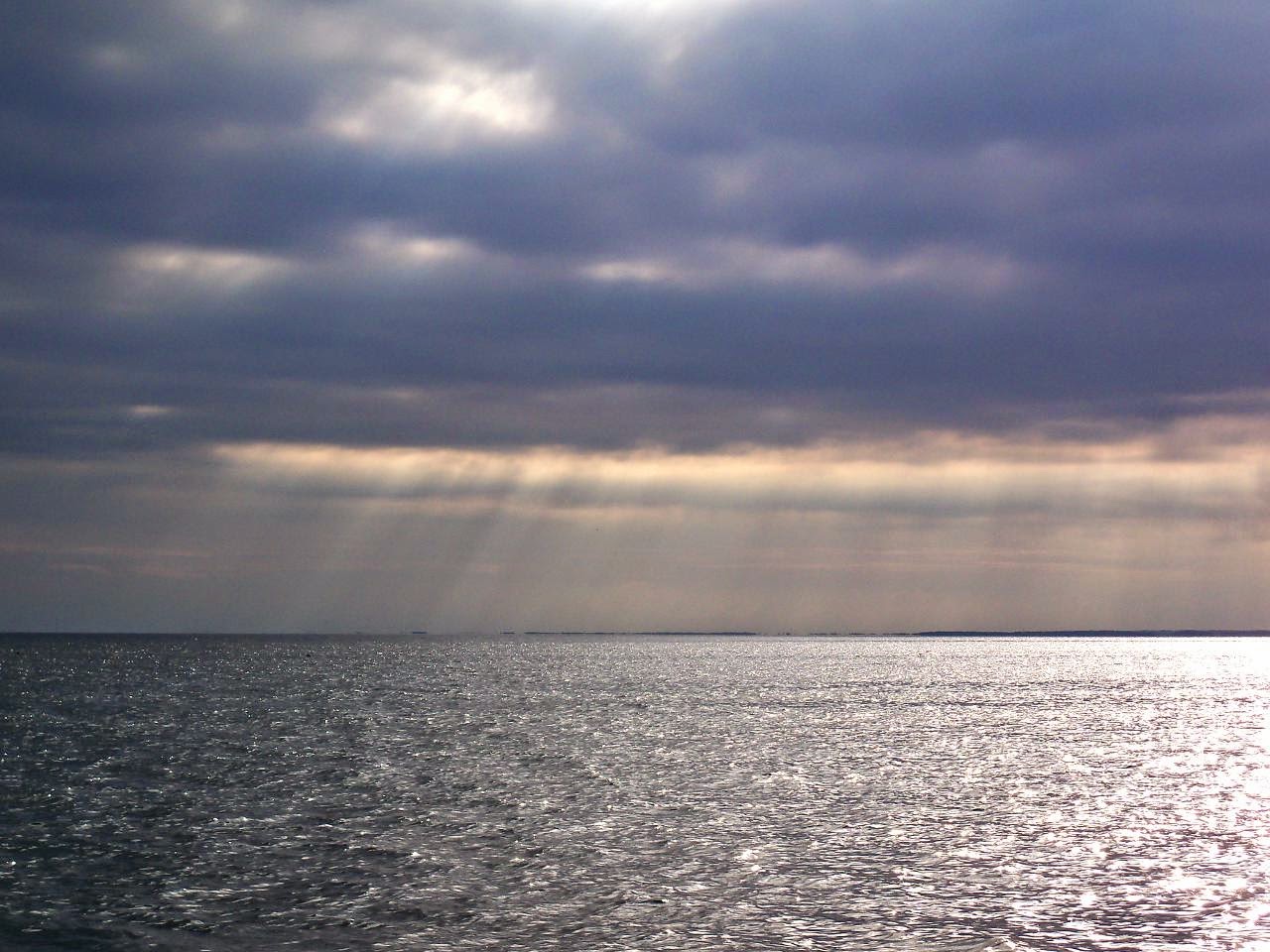 By the time it was time to go home, the wind was pretty fair, and the skies largely overcast.

Oh, and I got back in time to see the final quarter of the game, when Redskins lost to the Cardinals.
Posted by Fritz at 8:30 PM