FEMEN Fights for Ukraine - From Paris

You know it had to happen, FEMEN, the Ukrainian "sextremist" group, who find an excuse to take off their blouses and display their uh, brains to the world for almost almost every excuse, including, Barbie, Vladimir Putin,  Islamic anti-feminism, fashion, the Pope, Silvio Berlusconi, and Davos, would have something to say about the Ukrainian/Crimean crisis. I suppose protesting Putin's invasion of Crimea would be way too last year, so instead, they're protesting Yulia Tymoshenko, the former  Prime Minister who was jailed on "corruption" charges by the recently deposed Viktor Yanukovitch, and who is expected to run again.  They chose the relative safety of Paris, and the Eiffel Tower for their visuals: 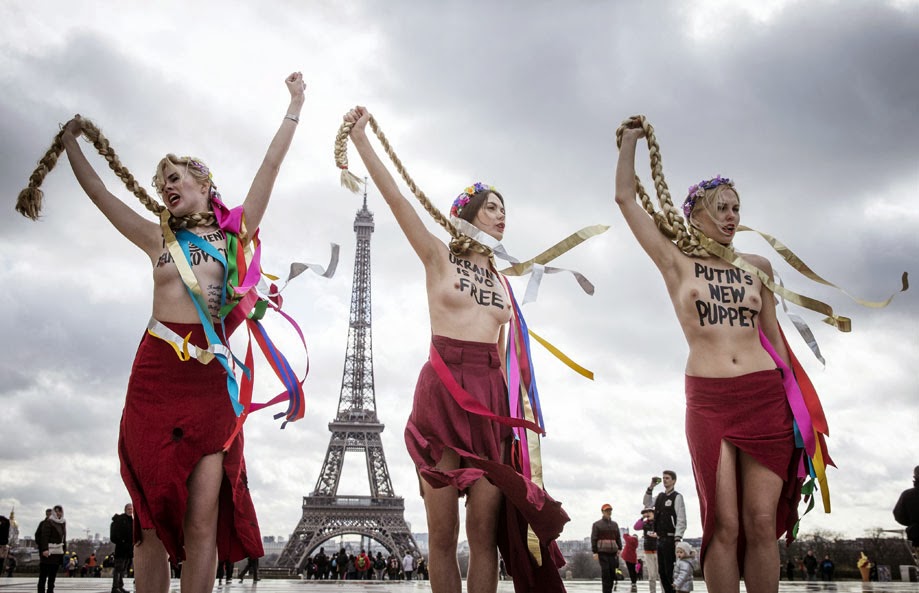 Activists from the radical feminist group Femen have staged a topless demonstration against Ukrainian opposition leader Yulia Tymoshenko in Paris.

Three "sextremists" - as Femen calls its members - took off their tops at the Trocadero Square near the Eiffel Tower in the French capital. 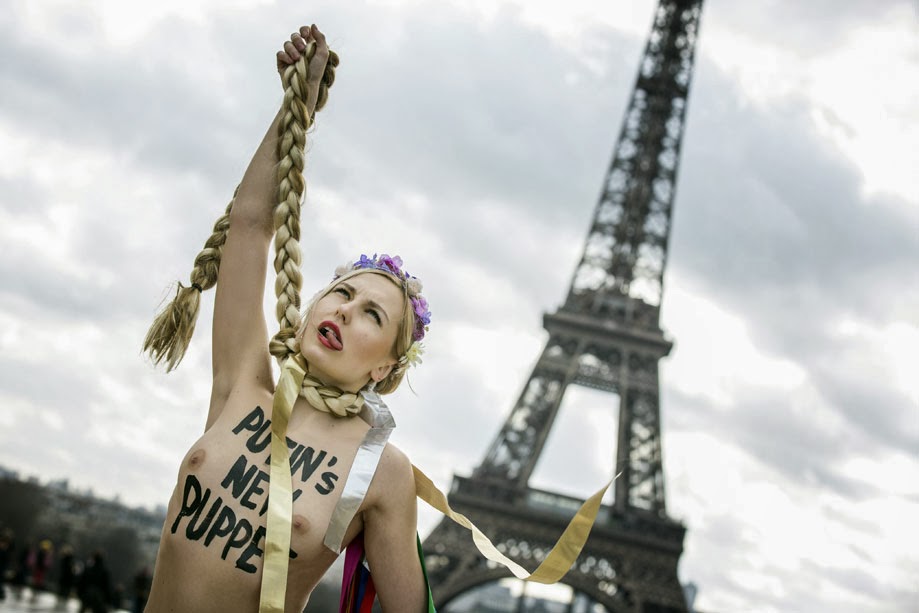 I have to say, the staging is impeccable.  The stormy looking sky, the Eiffel Tower, the uh, brains.


In a November interview with IBTimes UK, Femen leader and Ukrainian native Inna Shevchenko criticised Tymoshenko saying it was not enough for a woman to hold a role of power to be described as a feminist.

"I would never say she was a great example of a woman in power," Shevchenko said.
Tymoshenko served as Ukrainian prime minister twice, briefly in 2005 and then again from 2007 to 2010.

As I recall, she was no favorite of Putin, and there is a lot of value in that.


The 52-year-old was released from jail last week, in the wake of the revolution that toppled her political rival, fugitive president Viktor Yanukovich.

She is now expected to run for president but remains a divisive figure amid Ukrainian revolutionaries, as many perceive her as an exponent of the corruption-ridden old political establishment. 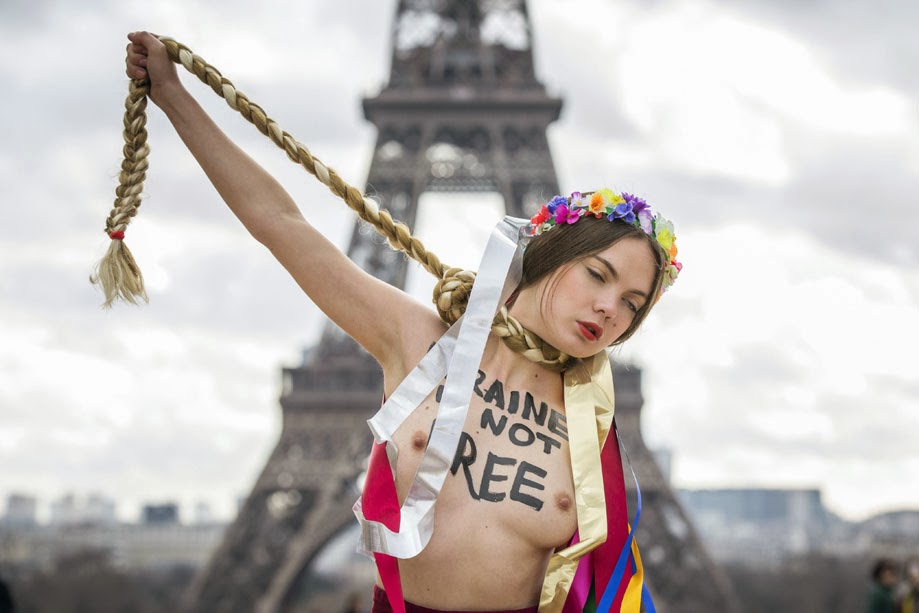 Interestingly, but not necessarily inconsistently, in the past FEMEN has protested the jailing of Yulia Tymoshenko.  It's not inconsistent to oppose someone being jailed on what were probably overblown charges of corruption (Ukraine and corruption go together like a hammer and sickle), and be opposed to having her become the next Prime Minister. But it does suggest that their choices for causes to protest is opportunistic.  But as I've said before, "Whatever they're for, I'm against. Keep the protest alive!"


Prior to her political career, Tymoshenko was a successful but controversial businesswoman in the gas industry, becoming by some estimates one of the richest people in the country. In 2005 she placed third in the Forbes Magazine's list of the world's most powerful women.

Tymoshenko strives for Ukraine's integration into the European Union and strongly opposes the membership of Ukraine in the Customs Union of Belarus, Kazakhstan, and Russia.

Say what you want about Yulia Tymoshenko, at least she keeps her blouse on.


Wombat-socho is back on track this week at The Other McCain with "Rule 5 Sunday: Take It Like A Man."
Posted by Fritz at 6:00 AM