Obamacare Schadenfreude from the Depths of Fimbulwinter

In Norse mythology, Fimbulvetr (or fimbulvinter), commonly rendered in English as Fimbulwinter, is the immediate prelude to the events of Ragnarök.

It simply means "Mighty Winter". Fimbulvetr is the harsh winter that precedes the end of the world and puts an end to all life on Earth. Fimbulwinter is three successive winters where snow comes in from all directions, without any intervening summer. During this time, there will be innumerable wars and ties of blood will no longer be respected: the next-of-kin will lie together and brothers will kill brothers.

Here it is, St. Patrick's Day, and, courtesy of Tropical Winter Storm Wiley (I was wrong yesterday) we have something on the order of 8 inches of snow on the ground, and the possibility of more later this afternoon. This isn't even funny any more. I don't think I need to make another analogy between our endless winter and Obamacare.

In a 279-page document, the Department of Health and Human Services (HHS) detailed adjustments to the healthcare law's "risk corridors" program, a means for shifting money from insurers who fare better under the new system to those who fare worse.

Risk corridors have been decried by conservatives as a bailout that could leave taxpayers on the hook for billions of dollars. The administration said Friday that it will implement the program in a budget-neutral way.

Allow me some skepticism on that.


Under the proposed rules, the administration would tweak the formula that determines how much money insurers pay and receive through the risk corridors.

The change will mean that some companies see higher payments, or higher charges than under previous rules. The calculations will correspond with insurers' administrative costs and on average, "suitably offset" any unexpected spending, according to the administration.
Specifically, HHS would raise the administrative cost ceiling from 20 percent to 22 percent, and increase the risk corridors' profit margin floor from 3 percent to 5 percent.

The Obama team quietly gives up on making ObamaCare work


It turns out the Obama team has delayed the individual mandate to buy health insurance — though the announcement was quiet and roundabout, to minimize the embarrassment. What we’re left with is a US health-care system whose engine has been partly disassembled — and a mechanic who doesn't know how to make his plan for rebuilding it actually work, even as he insists we’re already better off.
. . .
The mandate delay is, of course, just the latest postponement of a key part of ObamaCare. The natural question is, what’s left?

Plenty — all of it characteristic of this administration:
In other words, there’s lots of parts in place for that new engine for the US health-care system, and some of them are even moving. But the engine isn't working.

But even though effectively the individual mandate has been suspended by making exceptions available to practically anyone for poorly documented reasons, the administration insists it will not delay the mandate:

Both can be technically true; if you don't delay the mandate but don't enforce it on anyone either, you might as well have delayed it.


The number bounced around for years — 46 million.

President Obama said it in August 2009: “I don’t have to explain to you that nearly 46 million Americans don’t have health insurance coverage today. In the wealthiest nation on Earth, 46 million of our fellow citizens have no coverage.”

He said it dozens more times, including in June 2013: “We are not a nation that accepts nearly 46 million uninsured men, women and children.”

The Obama administration pumped the number with official reports. The White House Council of Economic Advisers said, “Perhaps the most visible sign of the need for health care reform is the 46 million Americans currently without health insurance.” The Census Bureau got in on the act, too, saying some 48 million Americans lacked health insurance.
It was official: Nearly 15 percent of America’s 313 million citizens had no coverage and were, as Mr. Obama loved to say over and over to hype the fear, “one illness away from financial ruin.”

So, he created Obamacare. The crux of the biscuit: The United States would completely change its entire health care system to make sure those 46 million got insured. Well, at least that’s what every rational American thought. If there are 46 million uninsured, and the president and Congress are overhauling the system, it must be to solve the whole problem — not just part of it.

But last week came word that with just 15 days left for people to enroll for federal coverage, just 4.2 million had. The math is simple: That’s just 9 percent of the supposedly 46 million uninsured.

“It will be a larger number than that by the end of March,” Mr. Obama promised in an interview with WebMD. “At this point, enough people are signing up that the Affordable Care Act is going to work.”

Still, the obvious question is: We changed the $2.7 trillion health care system to sign up 4.2 million people?

And most of those 4.2 million had health insurance prior to Obamacare, and had those policies cancelled due to Obamacare. The goal was never to insure the uninsured, it was to assure the government takeover of the health care system.

But, don't worry, Preznit Obama has a plan to get signups up; push Obamacare with his March Madness picks: 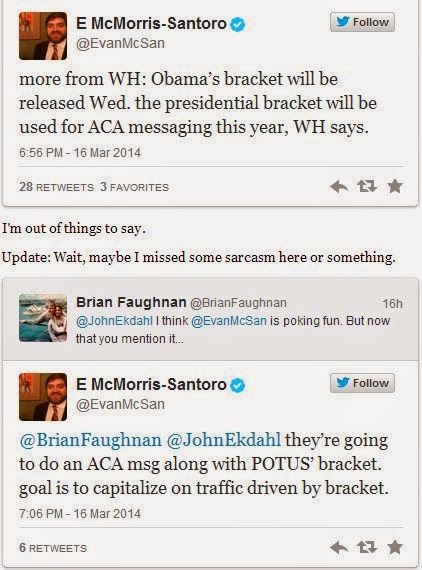 The Democrats and Media (but I repeat myself) war on women and cancer victims continues:


. . .“If I do not receive my medication, I will die,” worries Boonstra, who was invited to the State of the Union address as the guest of Representative Tim Walberg (R., Mich.). “I believed the president when he said I could keep my health-insurance plan. I feel lied to. Congressman Peters, your decision to vote for Obamacare jeopardized my health.”

Peters and the media have come out swinging, claiming Boonstra is a right-wing Koch-brothers tool (the Kochs donate to AFP). Like their fellow Democrats in office, newsrooms have long been sympathetic to universal health care.

These organizations have ignored the details of Boonstra’s plan — instead using numbers from Blue Cross (an advocate for Obamacare) numbers to attack her. Through AFP spokesman Scott Hagerstrom, Boonstra communicated her concerns with her new plan.

Uncertainty dogs her — especially having been lied to once by the president. Where her canceled plan’s premiums once covered all her costs, she now must plan for out-of-pocket expenses. Those expenses are capped but will double to $10,200 if she goes out of her network — a not-uncommon need for cancer patients, whose treatment often changes — for a doctor or tests. Of her five cancer drugs, she has already discovered that one (Loratadine) is not covered. Detroit News columnist Dan Calabrese also unearthed the fact that glaucoma and “long-term care and nursing care are not covered.”
...
The Boonstra attacks are not an isolated event. Cancer victim Edie Sundby was attacked by California Democrats and the Los Angeles Times when she wrote anop-ed critical of Obamacare in the Wall Street Journal. Democrats and theirSpokane Review parrots thrashed Bette Grenier when she too dared question theACA. And cancer victim Catherine Blackwood. And so on.

How many patients will be intimidated by such tactics? How many will persevere like Boonstra? It’s only March. Democrats are just getting warmed up.

One of the common rebuttals you hear to complaints about Obamacare, both in the media, and in discussions with the masses is that Republicans never proposed any improvements to health care. This of course, is not true, but admittedly, their proposals, from a position of being out of power, are not heavily publicized by the media, and if they are, it's in scary language.

In my world, the function for conservatives is to sit back and think about how things work before doing something, which in many cases, especially liberal programs, ending up making things worse through unintended consequences and perverse incentives.  However, at some point it becomes necessary to try to fix the wreckage the liberals have left in their wake.

The plan includes an expansion of high-risk insurance pools, promotion of health savings accounts and inducements for small businesses to purchase coverage together.

The tenets of the plan — which could expand to include the ability to buy insurance across state lines, guaranteed renewability of policies and changes to medical-malpractice regulations — are ideas that various conservatives have for a long time backed as part of broader bills.

But this is the first time this year that House leaders will put their full force behind a single set of principles from those bills and present it as their vision. This month, House leaders will begin to share a memo with lawmakers outlining the plan, called “A Stronger Health Care System: The GOP Plan for Freedom, Flexibility, & Peace of Mind,” with suggestions on how Republicans should talk about it to their constituents.

It sounds somewhat less destructive than Obamacare, at least.
Posted by Fritz at 11:12 AM