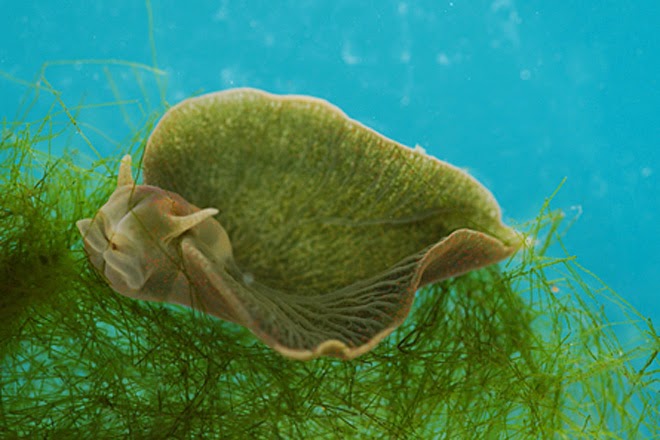 Shaped like a leaf itself, the slug Elysia chlorotica already has a reputation for kidnapping the photosynthesizing organelles and some genes from algae. Now it turns out that the slug has acquired enough stolen goods to make an entire plant chemical-making pathway work inside an animal body, says Sidney K. Pierce of the University of South Florida in Tampa.

The slugs can manufacture the most common form of chlorophyll, the green pigment in plants that captures energy from sunlight, Pierce reported January 7 at the annual meeting of the Society for Integrative and Comparative Biology. Pierce used a radioactive tracer to show that the slugs were making the pigment, called chlorophyll a, themselves and not simply relying on chlorophyll reserves stolen from the algae the slugs dine on.

“This could be a fusion of a plant and an animal — that’s just cool,” said invertebrate zoologist John Zardus of The Citadel in Charleston, S.C.

One of my first forays into science back in college was to to use C-14 to demonstrate how algal cells in a sea anemone, Anthopleura xanthogrammica, fixed carbon using light and sodium bicarbonate.  But this goes well beyond that.  Instead, this sea slug has stolen the molecular equipment to make the photosynthetic apparatus from algae, and uses it to make it's own food from inorganic carbon and sunlight.


Pierce emphasized that this green slug goes far beyond animals such as corals that host live-in microbes that share the bounties of their photosynthesis. Most of those hosts tuck in the partner cells whole in crevices or pockets among host cells. Pierce’s slug, however, takes just parts of cells, the little green photosynthetic organelles called chloroplasts, from the algae it eats. The slug’s highly branched gut network engulfs these stolen bits and holds them inside slug cells.

Some related slugs also engulf chloroplasts but E. chlorotica alone preserves the organelles in working order for a whole slug lifetime of nearly a year. The slug readily sucks the innards out of algal filaments whenever they’re available, but in good light, multiple meals aren’t essential. Scientists have shown that once a young slug has slurped its first chloroplast meal from one of its few favored species of Vaucheria algae, the slug does not have to eat again for the rest of its life. All it has to do is sunbathe.

But the chloroplasts need a continuous supply of chlorophyll and other compounds that get used up during photosynthesis. Back in their native algal cells, chloroplasts depended on algal cell nuclei for the fresh supplies. To function so long in exile, “chloroplasts might have taken a go-cup with them when they left the algae,” Pierce said.

There have been previous hints, however, that the chloroplasts in the slug don’t run on stored-up supplies alone. Starting in 2007, Pierce and his colleagues, as well as another team, found several photosynthesis-related genes in the slugs apparently lifted directly from the algae. Even unhatched sea slugs, which have never encountered algae, carry “algal” photosynthetic genes.