Another day, another dose of unleavened Obamacare Schadenfreude.

The Administrations decision extend the Obamacare enrollment by allowing people to check a box on the Federal website to certify that they had made a good-faith effort to navigate the system continues to reverberate.

Statutory Authority?  We don't need no stinkin' statutory authority: The Daily Caller reminds us how earlier this month, Kathleen Sebelius said they would not extend the deadline, and that they had no statutory authority to do so:

John Boehner responded "Is this a joke?:

Harry Reid said that the deadline needs to be extended because many people who would use the program are stupid don't know how to use the internet.

More to the point, many of it's target patrons are simply low information people (the typical democrat voter) and don't even know about the deadline: Poll: Many Uninsured Don’t Know Time is Running Out


A new survey shows the Obama Administration's publicity campaign still hasn't reached a lot of Americans without insurance. Just 39% of uninsured Americans know that the deadline to sign up for insurance under the health care reform law is less than a week away, according to a new poll. The latest tracking poll from the Kaiser Family Foundation finds that, among uninsured adults, 43% don’t know when the deadline is or refused to answer. Five percent believe the deadline has already passed and 13% think it’s later this year. 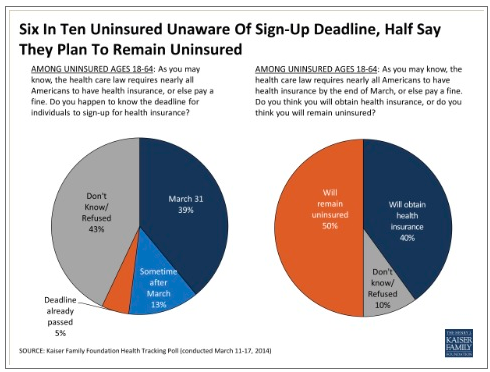 And I'm sure they would all be perfectly responsible users of health care, too. The White House and the democrat friendly media is desperately trying to recast the delay as "just allowing people to finish." 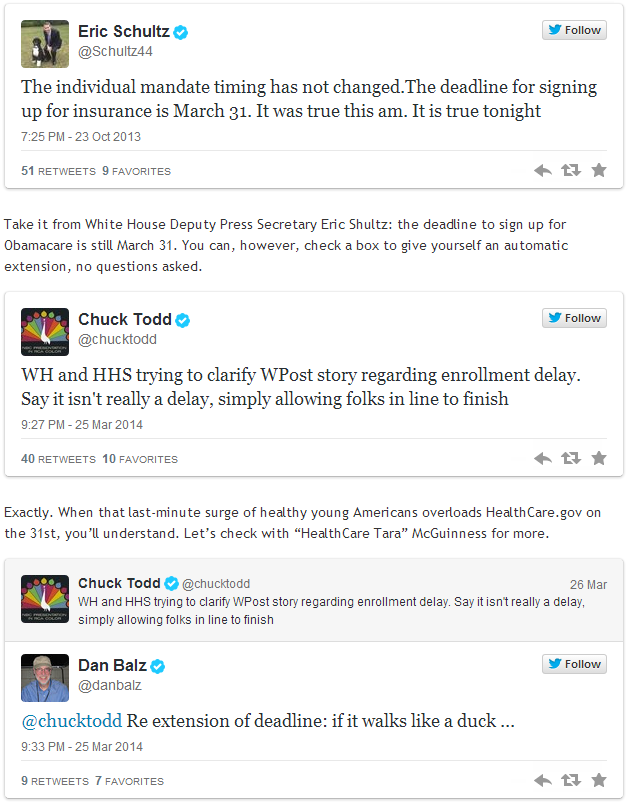 The "Hobby Lobby vs. Sebelius" arguments before the Supremes is also the subject of a lot of electrons: A long and lawyerly discussion from Althouse: "Obama Administration Suffers A Drubbing In Hobby Lobby Arguments." Her conclusion?


I think Hobby Lobby will win this case, because Congress passed RFRA, and it's a system of judge-made exemptions. I thought the strongest argument for the government was to say that there isn't a substantial burden, but there was very little talk about that. Mostly, Verrilli persevered insisting on the compelling interest, which was quite hard to see at all, and resisting the need to meet the requirement of least restrictive alternative. The Court could write a super-short opinion here, but I don't think it will. If they go long — when they go long — I hope the detail has to do with the dynamics of lawmaking, what Congress did and what it did not do in its 2 statutes, RFRA and the ACA. I'd like to see Congress's feet held to the fire on this mess it has created for the people and for the courts. Some serious discipline is in order.

Patty Murray (D-Wash) finds it "stunning" that the court would stoop to consider a meer regulation:

A long piece on Habig vs. Sebelius, the other court case that may cut the legs off of subsidies issued by the federal website: It's time for White House to start sweating over legal challenge to Obamacare subsidies: Keep the hope alive.

6 Ridiculous Arguments Offered During Yesterday’s Hobby Lobby Hearing. Too long to cite effectively, even using my usually general allotment of words. Go read it yourself


And some random grumblings: Why I’m Jealous of My Dog’s Insurance A typical rich California liberal has an insurance policy on a dog (a rare thing out here in rural country), and the dog gets sick and the insurance pays off. Meanwhile, his insurance gets cancelled, he's forced into Obamacare, with higher premiums and deductibles. As Instapundit might say (but didn't) "another rube self identifies."


Liberal pollsters aren’t issuing frank warnings about an emerging enthusiasm gap and admonishing Democrats to distance themselves from Obamacare for kicks and giggles. They’re doing so because they’re staring at numbers like these every day:

Then why the hell are they still undecided? The Democrats are hearing, and are walking tip-toeing as quietly as possible away from Obamacare: