Today's Slower Maryland weather report; cool (pushing, but not yet achieving 40 F), cloudy, and windy, 20 mph from the south.  Better than yesterday, but that's not a high bar.

I thought Tuesday afternoon was the magic period when all the work got done, but if so, it takes until Thursday to get it out into press.  I'm (not so) literally up to my neck in Obama Schadenfreude that came out yesterday:
The Preznit has decided that the Sequester Cuts (Reign of Pain), will not apply to Obamacare:


The Obama administration has decided that the sequester's mandatory spending cuts no longer apply to part of Obamacare.

The health care law provides subsidies to help low-income people cover some of their out-of-pocket costs. Last year, the administration said those subsidies were taking a 7 percent cut because of the sequester, which imposed across-the-board reductions in federal spending.

But now, the White House has changed its mind. It removed the cost-sharing subsidies from its list of programs that are subject to the sequester, eliminating the 7 percent cut for 2015.

The Committee for a Responsible Federal Budget, which noticed the change, said the reversal would likely restore about $560 million to the subsidies—and require $560 million in cuts to other programs to make up for it.
. . .
Who benefits from the change? The low-income families who qualify for these subsidies, as well as the White House and insurance companies.

As long as you get to make up the rules in Calvinball, you might as well change them in your favor, right?


In spite of the Senate Majority Leader’s tantrums, the roster of devious Koch-funded liars continues to grow. Unleash the campaign lawyers and Obamacare truthers!

More at the link.

Obama administration invokes "Angry Woman" to help Obamacare. That may make Pajama Boy more likely to sign up, but isn't going to do much for the average "young invincible." 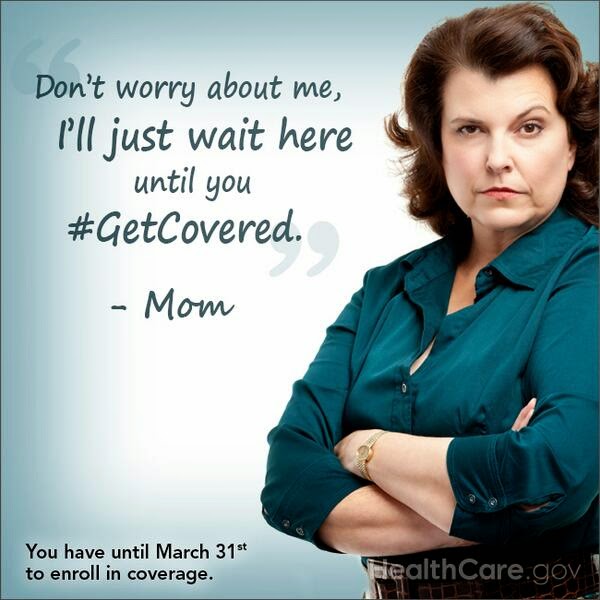 I like to think of her as the "Bossy Woman."

The Daily Caller does the math and concludes that, souprise, souprise, that Obama lied again and Obamacare definitely isn't as cheap as your cell phone.  And you can't call home to Bossy Mom with it, either.

As I said yesterday, the Jolly/Sink race generated a lot of buzz about Obamacare since Tuesday.  Some of the better examples:

Alex Sink "could not outrun the tsunami of advertisements tying her to President Obama’s health care law."


That's the analysis, by Lizette Alvarez, in the NYT:The defeat was devastating at a time when Democrats are desperate to change the prevailing story line that 2014 could cost them the Senate, with the House already out of reach....

Help the Dems you love by hiding sharp objects


The significance of Democrats’ loss last night in Florida-13 is quite debatable. What isn’t debatable is that fact that they definitely thought it was winnable (worth spending upward of $6 million in party, donor, and outside group money) and they lost anyway.

The real question is whether anything in the environment made this loss possible or even inevitable.

Today’s WSJ/NBC poll provides several answers to that. For one thing, yes, Obama’s approval ratings are at a new low (41 percent) and his disapprovals are tied for an all-time high (54 percent). But that only scratches the surface.


Young wasn't, Sink did, and Jolly is.

To paraphrase James Carville, it's the eponymy, stupid. The references are to Rep. Bill Young, who died at 82 in October, and the candidates in yesterday's special election to succeed him, Democrat Alex Sink and Republican David Jolly.
. . .
Professional political observers and journalists touted the election as a bellwether. "It's rare in politics that anything other than a presidential contest is viewed as a 'must win'--but the special election in Florida's 13th District falls into that category for Democrats," wroteStuart Rothenberg back in January. . .


Four years after ObamaCare passed, and six months after the disastrous rollout and horrendous market disruptions made clear just how big an albatross it would be around their necks, Democrats are, er … starting to worry about it for the midterms. Politico’s Jake Sherman and Burgess Everett report that the shock of David Jolly’s unexpected win in FL-13 is so great that they can’t even decide how Alex Sink got the messaging wrong:


Democrats can’t even agree whether Obamacare was the reason for their crushing loss in a Florida special election Tuesday.
Now picture how their messaging plan for the health care law is shaping up for 2014. …
A few Democrats are advocating a drastic rhetorical shift to the left, by criticizing their own party for not going far enough when it passed the law in 2010.
Other Democrats plan to sharply criticize the Affordable Care Act when running for re-election.
Many plan to stick to the simple message that Obamacare is flawed and needs to be fixed —a tactic that plainly didn’t work for Sink.

NYT: Sink loss “devastating” for Democrats, was driven by ObamaCare


Surely this settles the spin war. It’s nice to occasionally see these guys on the opposite side of from Rep. Debbie Wasserman Schultz in such a battle:


. . .Ms. Sink, 65, lost by 1.9 percentage points to the Republican, David Jolly, 41, a lobbyist whose former boss Representative C. W. Bill Young held the seat for four decades until he died in October.
The defeat was devastating at a time when Democrats are desperate to change the prevailing story line that 2014 could cost them the Senate, with the House already out of reach.
Tuesday’s special election underscored three persistent themes likely to play out around the country: Republicans are more motivated than Democrats, attacks on the unpopular health care law will dominate many races, and the limitless flood of outside money can easily transform local races into national ones.

The Jolly Sink result has Chrissy Matthews on the verge of tears conceding the Senate:


“It’s going to be very hard to hold the Senate — I think the Senate goes,” he said on Morning Joe on Thursday. “I think we heard from the Ghost of Christmas Future this week; they’re going to lose the Senate,” he added, referring to Republican David Jolly’s victory Tuesday in Florida’s special congressional election.

However, Nancy Pelosi is bossing Republicans around, telling them not to beat the Obamacare drums so loudly because it will rebound at the polls:


“I think the Republicans are wasting their time using that as their electoral issue, and they will find that out,” she said.

Pressed by a reporter whether Democrats should shy away from the issue on the campaign trail, Pelosi didn't hesitate.

“No, absolutely not,” she said.

Just because she is interested in giving good advice to Republicans.

But Bart Stupak a former Democratic Representative from Michigan, who was pushed out chose not to run Congress in 2011 complained that he was blindsided by the stridency of democrats on the issue of conscience objections:


A day or so ago, the one man who might have stopped ObamaCare at the final hour now says he got shafted. Bart Stupak had held out for statutory prohibitions on abortion funding through ObamaCare but settled instead for an ambiguous executive order — and saw his political career crash to an end. Now he’s unhappy because his fellow Democrats promised him they’d respect conscience objections:


Today, as a private citizen, I’m proud to stand with the Green and Hahn families and their corporations, Hobby Lobby and Conestoga Wood, in seeking to uphold our most cherished beliefs that we, as American citizens, should not be required to relinquish our conscience and moral convictions in order to implement the Affordable Care Act. …
[W]e received an ironclad commitment that our conscience would remain free and our principles would be honored. With our negotiations completed and our legislative intent established by the colloquy, we agreed to an executive order directing federal agencies to respect America’s longstanding prohibitions on government funding of abortion and most relevant here, to respect longstanding protections for individuals and organizations conscientiously opposed to participating in or facilitating abortions.
I was deeply concerned and objected to the HHS mandate that required all health plans to cover all FDA-approved contraceptives, including four drugs and devices that could terminate human life at its earliest stages by preventing an embryo’s implantation in the womb. The FDA’s own labeling statements, as well as other studies, indicate that drugs such as the 5-day-after pill (Ella), as well as intrauterine devices (IUDs), may operate this way. The Greens and the Hahns cannot, in good conscience, risk subsidizing actions that may take human life.

Democrats from Obama on down promised that people could keep their current plans, keep their preferred doctors, pay lower premiums, and have a website that works. Sorry to see former Rep. Stupak shocked, shocked about being betrayed, but that’s the way most of us felt about Rep. Stupak when he caved on his principles in the first place.


Behold, the layers of editors and fact checkers. With oral arguments scheduled at the Supreme Court in less than two weeks in the Hobby Lobby and Conestoga Wood cases, National Journal’s Sophie Novack and Clara Ritger offer up a primer titled “Everything You Wanted To Know About The Contraception Mandate (But Were Afraid To Ask),” as a way to educate readers on the stakes of the case. Most of this recounting of the legal fight is fairly straightforward — until readers get to the description of what happens if the plaintiffs prevail:


Implications: A win for Hobby Lobby and Conestoga would limit women’s access to contraception, essentially allowing any business owner to refuse to provide birth-control coverage on the grounds of religious freedom.

That, in a polite word, is absolute nonsense. Nothing in this case “limits access to contraception.” The issue at hand is whether businesses owned by people who have religious objections to contraception should be forced to provide it for free to their employees, not bar them from purchasing it on their own. Employees (contra NJ, it’s not limited to women) who draw salaries have full latitude to use their income to buy their own contraception and sterilization services.

"Access" has become an Orwellian word that means something that liberals absolutely insist must be provided by the government.

The Democrats attempts to "mend, not end" the health care system in Massachusetts that Mitt Romney instituted continue to be utter failures:

Among the findings not included in the Feb. 6 report, but reviewed yesterday by experts who evaluated the new revelations:


•   There was never any actual performance testing of the website before it went live Oct. 1 — a failure that “should have been enough to delay its launch,” said Joshua Archambault of the Pioneer Institute. “Yet the state moved forward anyway, and we have witnessed the anxiety and pain these problems have caused”;
•   There was no accountability for staffers for failing to perform;
•    The project wasn’t properly coordinated. “People that were supposed to be talking to each other weren’t,” said Bill Curtis, the chief scientist at CAST Software; and
•     Even early on in the project, MITRE analysts found, the site was displaying the same glitches that would later plague applicants when they tried navigating.

“To sum it all up in one word — amateurish,” Curtis said. “There’s a lot more  information, and some of it is fairly alarming. It really looks like the first report is an  executive summary. The  second report really provides all the details ... some of which makes you suspect they found even more things.”