Emily Miller at the Washington Times has thoroughly chronicled Mr. Witaschek’s court proceedings, which to date have spanned nearly two years and now appear likely to continue into the appellate stage.

In brief, the case centered on a single inert piece of ammunition, which rested on Mr. Witascheck’s desk in the District, and which he did not know was illegal.


William F. Vanderpool, a retired supervisory special agent for the Federal Bureau of Investigation, [explained] to the judge that the saboted lead balls have no powder or propellant attached, so are not “live…”
The primer on the shotgun shell had already been struck by the firing pin. Mr. Witaschek kept the misfired shell on his home office desk as a memento from a hunt.

Ultimately, Mr. Witaschek was sentenced to time served, a $50 fine, and is required to enroll with the Metropolitan Police Department’s firearm offenders’ registry within 48 hours.

One can be reasonably sure that Mr. Witaschek is not a anti-gun media spokesman, or a someone with good contacts in the D.C. hierarchy:


As noted on Legal Insurrection before, NBC anchor, David Gregory, previously managed to avoid prosecution even after the anchor violated D.C. laws by procuring an empty 30-round magazine and displaying it on live television.

Unlike Mr. Witaschek’s unknowing violation of the law, the violation by Gregory and NBC was no accident. Indeed, as we’ve shown here before, an e-mail from an NBC News representative explicitly inquired into the legality of the use and possession of the empty magazine. The D.C. Metropolitan Police Department told NBC that, “possession of high capacity magazines is a misdemeanor.”

Roughly 36 hours following receipt of that unequivocal advisory e-mail from the MPD, Gregory brandished the magazine on NBC’s Sunday program, Meet The Press.

It was later determined by the Office of Attorney General, in no uncertain terms, that Gregory and NBC clearly violated D.C. laws by possessing the magazine. The MPD delivered a Warrant and supporting Affidavit to OAG, a document OAG has refused to provide to Legal Insurrection in response to our Freedom of Information Act request, and which we are now fighting in court (with the help of Judicial Watch) to obtain.

Notwithstanding this determination that Gregory and NBC News violated the law, the OAG opted not to prosecute Gregory or anyone at NBC because, among other things, “prosecution would not promote public safety in the District of Columbia nor serve the best interests of the people of the District to whom this office owes its trust.” 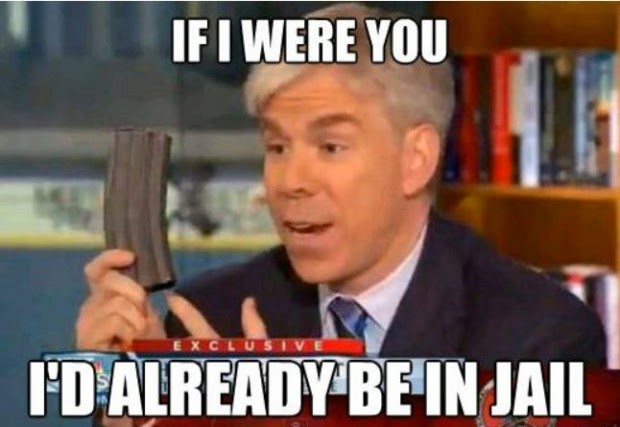 
It what would surely place his likeness prominently on the Mt. Rushmore of hypocrisy if the allegations are proven in a court of law, famously anti-gun California state Senator Leland Yee has been charged with, in addition to bribery and public corruption…yes…gun running. Specifically conspiring with known organized crime lord Kwok Cheung “Shrimp Boy” Chow to illegally import firearms and sell them without a license . . .
The affidavit charges that the $2 million worth of weapons to have been secreted into the country from the Philippines included rocket launchers and machine guns, some of which Yee himself had fired while on Mindanao. A portion of the weapons Yee conspired to bring into the U.S. through New Jersey were to have been forwarded on to North Africa via Sicily.

You gotta keep the competition down. 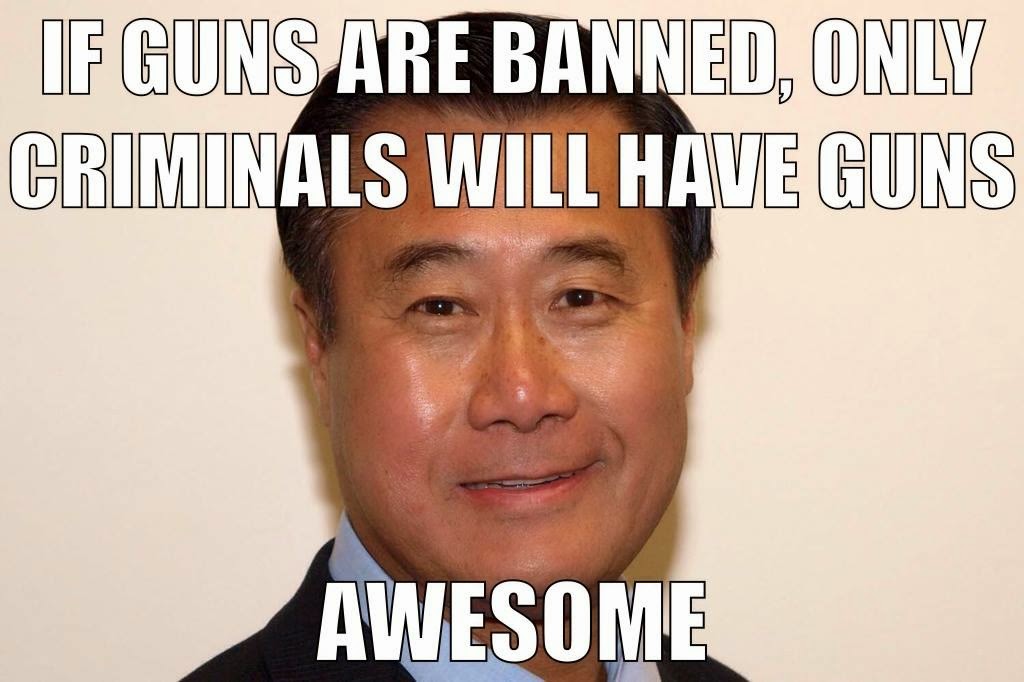