Today marks the 4th year after the signing of the Obamacare law, if you can still call it a law after so much of it has been rewritten without any further congressional modifications.  So how's that working out:


With Sunday marking the fourth anniversary of the Affordable Care Act being signed into law, it's worth revisiting the initial purpose of the president's signature legislation: Universal coverage was the main goal. Four years later, not even the White House pretends that this goal will be realized. Most of those who were uninsured before the law was passed will remain uninsured, according to the Congressional Budget Office.
. . .
While the president and his party struggle to find more convincing reasons why we need ObamaCare, three huge problems won't go away.

• An impossible mandate. For the past 40 years real, per capita health-care spending has been growing at twice the rate of growth of real, per capita income. That's not only true in this country; it is about the average for the whole developed world. . .

• Unworkable subsidies. A family of four at 138% of poverty level is able to enroll in Medicaid in about half the states and obtain insurance worth about $8,000. Since the coverage is completely free, that's an $8,000 gift. If they earn $1 more, they will be entitled to join a health-insurance exchange and obtain a private plan that costs, say, 50% more in return for an out-of-pocket premium of about $900. That's a gift of more than $11,000. . .

• Perverse incentives in the exchanges. Under ObamaCare, insurers are required to charge the same premium to everyone, regardless of health status, and they are required to accept anyone who applies. This means they must overcharge the healthy and undercharge the sick. It also means they have strong incentives to attract the healthy (on whom they make a profit) and avoid the sick (on whom they incur losses). . .

The federal website continues to be a carny horror ride with new unpleasant surprises around every bend: Yet Another Obamacare Glitch Was Just Discovered


The federal website central to Obamacare has been operating with a calculating error that could have negatively affected enrollment numbers, and no one seemed to know about it for nearly six months.

The Philadelphia Inquirer reports that HealthCare.Gov has a little-known glitch in its subsidy calculator that, though quite small, may be notifying people who are eligible for financial assistance that they do not qualify for a subsidy. The site’s calculator is an unofficial estimate that consumers can use to see how much financial assistance they qualify for before beginning the application process.

So, the glitch isn’t causing people to receive inaccurate subsidies, it’s just providing them with inaccurate information before they make the decision to move forward in the application process.

The had three and half years to get the numbers right, and they couldn't do it.  Good intentions just aren't enough.


Now that the first open enrollment period under the Affordable Care Act is coming to a close, insurers say they are getting a better idea of what to expect next year—and that includes higher premiums.

Early into Obamacare’s troubled launch—plagued with website problems, cancelled plans and numerous delays—several insurers were already warning that the rocky rollout would result in significantly higher premiums in 2015.
. . .
Here are four new things that could lead to rising premiums:

1. The Mix of Enrollees - Insurers say that people signing up for insurance through the new exchanges tend to be older and unhealthy. This is bad news for the Obama administration, which has stressed that younger enrollees are crucial to making the law work since they offset the costs of insuring older, sicker individuals. Early on, the White House said its goal was to have young people make up about 40 percent of total enrollees. However, the latest enrollment figures through March reveal they only make up about 27 percent of total enrollees. . .

2. Administrative Rule Changes’ Impact Enrollment Numbers - When the president announced that people could stay on their non-ACA compliant policies through 2016, many Americans decided to keep their old plans, even though insurers assumed would buy coverage on the new exchanges. Since these plans are less expensive and tend to be held by younger people, the change could mean that the risk pool will shift further toward older, sicker Americans. . .

3. Adjusted Medical Loss Ratio - The Obama administration is expected to announce a tweak to a provision in the law that sets a minimum medical loss ratio (MLR), Kaiser Health News reported. Under current law, insurers are required to put at least 80 percent of their total premium revenue from individual and small group market plans toward medical payments or consumer rebates, with the rest going to administrative costs and profits. . .

4. Insurers Underpriced Plans This Year - When insurers set their prices for this year, they had to estimate what the mix of enrollments would look like. Some insurers underpriced their policies, with the intention of raising their rates the second year when they had a better idea of what to expect. . .

Will the administration offer a new delay for enrollment? Grace period for ObamaCare shoppers?


The White House hinted Friday that consumers who begin their ObamaCare enrollment before March 31 might be given a grace period to finish their applications.

"As was the case for the December deadline, we're going to want to make sure that people who are already in line can finish their enrollment," White House press secretary Jay Carney said. "But for how that process works, I would point you to what happened in December and how that played out."

In December, the Obama administration gave consumers an additional day to finish signing up for their plans in order to secure coverage by Jan 1.

Oh, and your taxes aren't due this year until April, uh, whatever...

If you're still searching for coverage, take heed of the following:

Many health insurance plans sold on the Obamacare exchanges swap lower premiums for a narrow provider network. Be aware of this when you're signing up for coverage, because going out-of-network could come at a cost, Kaiser Health News says.

These may include: separate out-of-pocket maximum costs for out-of-network services, potential charges for preventive care services that are free under your network plan, and higher co-payments.

Yeah, but it's Obamacare, and narrow networks are baked into the cake, put in by the insurance companies to keep costs down.   But as the Chicago Cubs say "There's alway next year."


Changes are slated for Obamacare in 2015. The Obama administration is ordering the insurance marketplaces to "include a more robust offering of care providers in 2015," The Washington Post said.

Make that #5 in the above reason for increased costs for Obamacare next year. 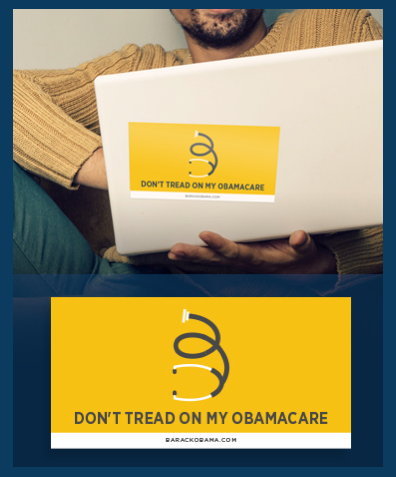 Which of course is a play on the “Don’t Tread on Me” slogan of the original Gadsden flag, designed by Colonel Christopher Gadsden (based off of the popular “Join, or Die” rattlesnake cartoon of the time) after he presented it to to the freshly-formed U.S. Navy during the start of the Revolutionary War. As Matt Welch points out at Reason, it’s been put to a variety of symbolic uses over the years (often with accompanying complaints about its supposedly confederate/racist/terrorist implications, or something) — most recently by the tea party, which gained so much grassroots-to-national momentum largely because of ObamaCare. I think OFA might kinda’-sorta’ be missing the basic point about liberty and heavy-treading government here, no? Especially since ObamaCare already has tread on millions of Americans’ healthcare with canceled plans, skyrocketing premiums, and limited networks? Maybe?

I expect the IRS to revoke OFA's tax exemption post haste...
Posted by Fritz at 10:45 AM