The Chickenshit Suit Gambit to Shut Down Fracking

Lawsuit Challenges Use Of Endangered Species To Stop Energy Boom

Oklahoma's attorney general has filed what could become a landmark lawsuit against the U.S. Fish and Wildlife Service, arguing the so-called "sue and settle" procedure for listing animals and plants on the endangered and threatened list violates the federal Endangered Species Act.  Scott Pruitt filed the complaint late Monday on behalf of the state of Oklahoma and the Domestic Energy Producers Alliance (DEPA), a national network of oil and gas companies. The attorney general charges that "by entering into private settlements with special interest litigants, (the Fish and Wildlife Service) has attempted to circumvent the legislative and regulatory process and make fundamental changes to its (Endangered Species Act)-imposed obligations."

The symbiotic relationship between the EPA and it's watermelon environmentalist allies has long been observed, and decried.  The upper management of EPA flows in and out of the environmentalist NGOs depending on the whims of the electorate, and they retain close ties.  This is  one of the focuses of the EPA email scandal, that EPA management hides it's collusion with the green groups using private email accounts to defeat FOIA requests.


In their suit, Oklahoma and the DEPA seek "declaratory and injunctive relief for violations of the ESA." The relief is intended to overturn designation of dozens of species added to the threatened or endangered list through the "sue and settle" process. It works by left-wing environmental groups, including the Center for Biological Diversity and Wildlife Guardians, petitioning Fish and Wildlife (FWS) to list a species as nearing extinction and then quickly suing the government to take action.

The EPA has even held training classes to help teach enviro groups how to sue the government and succeed. This goes on even when Republicans are in charge, but when the Democrats are in control, well, it's Katy, bar the door!


Under the Obama administration, the feds have entered into a consent agreement with the environmentalists to rush forward a judgment on an unprecedented number of species. A 2012 Chamber of Commerce study found record numbers of such "sue and settle" cases under Obama.

The issue has taken on new urgency. Under a March 31 sue-and-settle deadline, Fish and Wildlife is expected to rule that a handful of additional species are endangered — including the lesser prairie chicken. This colorful bird is found in Texas, Oklahoma, Kansas, New Mexico and Colorado. According to a spokesman at DEPA, "this designation could disrupt drilling and exploration on hundreds of thousands of very promising oil and gas lands in this part of the country."

And that is exactly what they are trying to accomplish, by any means necessary.


Green groups like the Center for Biological Diversity make no secret on their website of their desire to shutdown local oil and gas drilling in order to combat global climate change.

There are currently some 300 species that are now being considered for addition to the endangered species list, thanks to the sue-and-settle racket. In addition to the prairie chicken, the sage grouse, another pheasant that populates the western states, is also under consideration for inclusion on the Endangered Species List. 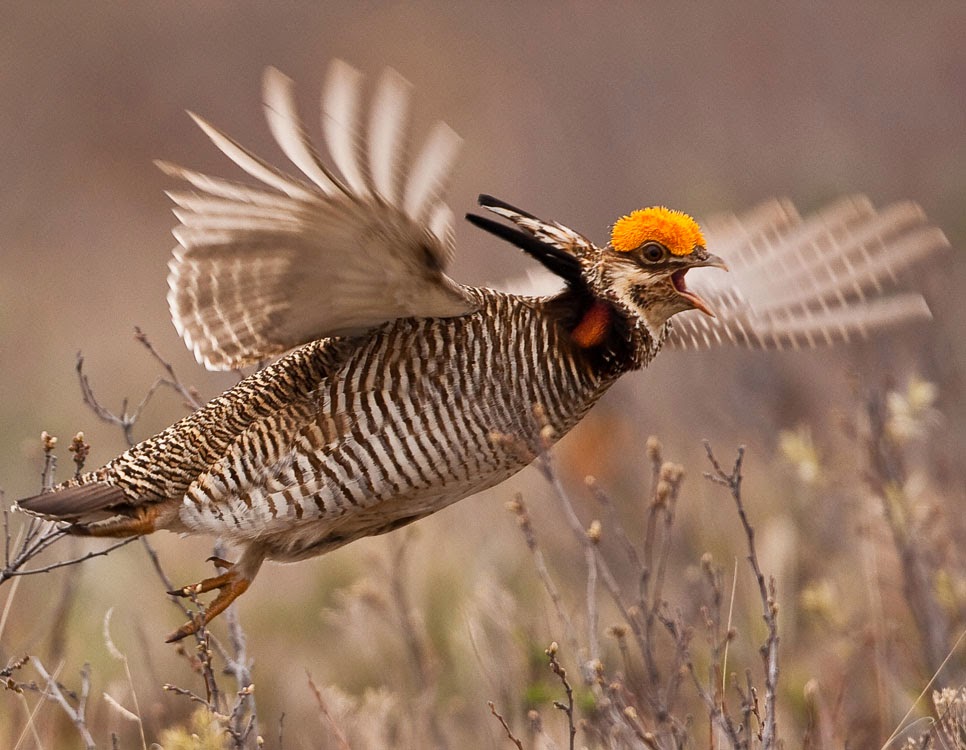 300 new endangered species?  I assume at least half of those must be beetles.  And we know how God loves beetles.


A major energy industry concern is that an endangered listing will effectively quarantine an area from development.

Under one proposed rule, if an endangered bird is discovered it would trigger a four-mile radius habitat protected zone. That means no mining, drilling or farming. "We are talking about potentially millions of acres being removed," says Amos Eno, a former Fish and Wildlife official and now president of Resources First Foundation.
"Much of this land," he warns, "is on private property."

Note the photo above, of the Lesser Prairie Chicken lek (breeding ground) far less than four miles from a natural gas storage facility.

It's not that they love Lesser Prairie Chickens (although I assume they're about as tasty as a grouse), it's that they hate people.