A windy, rainy day here in slower Maryland, with a temperature of 50 ish.  Not great, but hey, at least it isn't snow. It looks like Obamacare Schadenfreude is going to peak right up to the March 31st enrollment deadline, target, suggestion, wishhope.


Q. When is an extension not an extension?
A. When you just testified that you were not going to give another extension.

a. When "the administration decides that morning" that's "how it wants the law to read."
b. When it's "sort of comical" or "cynicism raised to the level of comedy."
c. When the administration is dealing with "one of the longest laws in American history, thousands of pages," so that no one can really be expected to "refer[] to section 706-b, or whatever," so "none of [the words] really matter."
d. When they "were lying when they said... the deadline wouldn't change" and "Everyone knew they were lying."
e. When "nobody really cares" about the statutory text or the fact that it's been lied about.
f. When you actually don't want any deadline, because you want an endless period of open enrollment, because you want to let people wait until they have a big medical expense before they buy insurance, because that's the way to "send all the companies into bankruptcy."
g. All of the above.
h. All of the above except f.


ObamaCare: Stop me if you've heard this before …


Insurers aren’t happy at all about this banana-peel punchline. They’d love for this to be over so they can stop having to deal with the White House, The Hill reports today:


The health insurance industry can’t wait for ObamaCare’s first enrollment season to be over so that it can have a break from dealing with the White House, sources on K Street say.
Insurers feel that the administration has taken advantage of them by making repeated delays and changes to the law, even as they have gone above and beyond the call of duty to fix problems with the rollout.

Kathleen Sebelius arrives in Nashville, Tennessee to promote the Healthcare.gov web portal in part by pulling a Chip Diller and proclaiming that all is well with the website and the program:


Will anyone believe her? In my column today for The Fiscal Times, I note that her record of honesty and competence makes her campaign a joke, too:


Perhaps Kathleen Sebelius can explain her Congressional testimony to Speaker Boehner by claiming to have been joking when she insisted that there would be no further delays in Obamacare earlier this month. Sebelius was asked specifically by Rep. Kevin Brady (R-TX) about any potential pushbacks on the open-enrollment deadline two weeks ago, and replied, “No sir.” 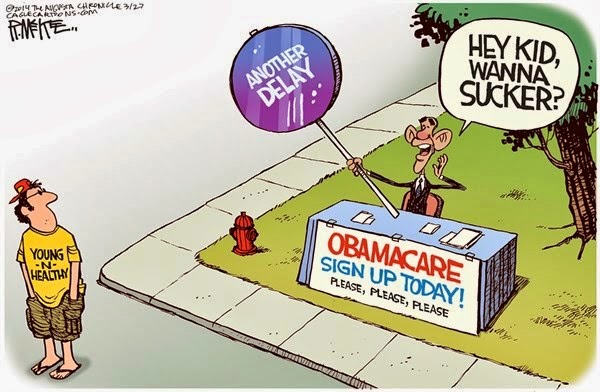 
. . .Millions have now signed up for the exchanges, but it’s not clear that the demographic mix is right to avoid steep premium increases by insurers in 2015. So far, it looks like young people— essential to making the economics of the exchanges work — aren’t signing up in the necessary numbers. The extension is surely a ploy to squeeze every last “young invincible” out of the current enrollment period, and hope the news for the rates in 2015 isn’t so bad.

And after that? It’s anybody’s guess. All we know for sure is that whatever Kathleen Sebelius says today may not be operative tomorrow.

IBD offers the real reason for the extensions and the Obama administration attempts to dodge demands for the hard numbers from HHS:


No, the real reason for the deadline delay is that Obama is desperate to get lagging enrollment numbers as high as he can, any way he can.

It’s the same reason the administration refuses to produce data on how many ObamaCare “enrollees” have actually paid their premiums: HHS officials insist they just don’t have that information.

But this week Reps. Dave Camp and Kevin Brady discovered that the Centers for Medicare and Medicaid Services has been telling insurers to report both enrollment and payment data. That, the lawmakers say, strongly suggests “the administration knows who has enrolled and paid their first month’s premium.”

In addition, eight state-run exchanges — each built with federal grant money — have managed to produce nonpayment data for some time now.

That picture isn’t very pretty. In Maryland, 46% of enrollees haven’t paid their premiums so far. In Vermont, 36% are unpaid. Overall, about one in five people in these states has yet to pony up.

If that average holds nationwide, it means that fully 1 million people haven’t paid for their ObamaCare plans yet and could lose their coverage.

They won’t be laughing, either.

Why does Kathleen Sebelius still have a job?

Good work, if you can get it.

Of course, she can’t say that. And she doesn’t have to answer to you anyway, you miserable serfs upon whom she feeds.

Ann Coulter, however, blames Mickey Kaus for his role in selling the program: SCREW YOU, MICKEY KAUS


I've been thrown off my health insurance -- THANKS, OBAMACARE! -- and have spent hours and hours over the past month trying to figure out my options now that the Democrats have made my old plan, which I liked, "illegal." (I prefer to think of my plan as "undocumented.")

Whom do I bill for the hours of work Obamacare forced me to perform? How about you, Mickey? You're the smartest living liberal (faint praise), and you assured us that Obamacare was going to be fantastic.

By now, Obama has issued "waivers" from Obamacare to about 99 percent of the country. (Perhaps you've heard, there's a big midterm election this year.) As one of the few Americans not granted a waiver, I'm here to tell you: You have no idea what's coming, America.

I thought I had figured out the best plan for me a month ago after having doctors and hospital administrators look at the packets of material I was sent by my old insurance company -- the same mailing that informed me my old plan was "illegal" under Obamacare.

But when I checked online recently, I discovered the premier plan -- the "platinum," low-deductible, astronomically expensive plan that might be accepted by an English-speaking doctor who didn't attend medical school in a Hawaiian shirt and board shorts -- does not include treatment at any decent hospitals.

That's sort of unfortunate because THAT'S THE ONLY REASON I WANT INSURANCE! That's the only reason any sane homo sapien wants health insurance: to cover health care costs in the event of some catastrophic illness or accident -- not to pay for Mickey Kaus' allergy appointments. But my only options under the blue-chip plan were hospitals that also do shoe repair.

I called Blue Cross directly to ask if its most expensive insurance plan covered the only hospital I'd ever go to in an emergency. Since that's all I wanted to know, that's what I asked. (I like to get to the point that way.)

But -- as happens whenever you try to ascertain the most basic information about insurance under Obamacare -- the Blue Cross representative began hammering me with a battery of questions about myself.

First my name. (Does that make a difference to what hospitals its plans cover?) Then my phone number. By the time he got to my address, I said, CAN YOU PLEASE JUST TELL ME IF ANY OF YOUR PLANS COVER XYZ HOSPITAL? I DON'T EVEN KNOW IF I WANT TO SIGN UP WITH YOU!

Finally, he admitted that Blue Cross' most expensive individual insurance plan does not cover treatment at the hospitals I named. Their doctors are "out of network" (and the person who designed this plan is "out of his mind").

This was the rest of the conversation, verbatim:

ME: None of your plans cover out-of-network doctors?

ME: Why is it called "Premier Guided Access WITH OUT-OF-NETWORK PLAN"?

BLUE CROSS: Where did you see that?

ME: On Blue Cross' own material describing its plans.

BLUE CROSS: Oh. I don't know why it's called that.

ME: None of your plans cover (the good hospital)?

ME: I don't know who you are, but I have a very specific set of skills that will help me find you. And when I find you, I am going to kill you. (Click.)

True conversation. Except the last sentence. That was my fantasy. . .

As much fun a Mickey Kaus is to read, I think this might overstate his importance.

Not to be outdone, Michelle Malkin takes on Hobby Lobby vs Sebelius:


Those protesting Hobby Lobby are using the most contradictory slogan possible: “Not My Boss’s Business,” all while demanding that paying for birth control (abortifacient drugs to be more specific) be nothing short of the boss’s business. Sandra Fluke agrees.

A more accurate slogan would be “Just shut up and pay for it.”

The Colorado exchange is signing people up, taking their money, and then, well, "forgetting" to cover them.  It saves a lot of money that way:


Thousands of Colorado residents may find themselves without health-insurance coverage, thanks to the failure of their state exchange to finish their paperwork. Megan Reardon thought she had completed her ObamaCare application in November for herself and her children. In January, she discovered that her application never got filed with her chosen insurer, and she’s not alone (via Newsalert). . .

But don't worry, all is well:

From the "Too Little Too Late" Dept, a number of Democratic Senator in trouble for reelection attempt to rethink Obamacare:


As each of us has said from the beginning, the ACA is not perfect.

Majority of Texas Hispanics Have Unfavorable View of Obamacare

As in other states with significant Hispanic populations, polling shows that Latinos in Texas are increasingly turning against the Affordable Care Act (ACA), also known as Obamacare. According to the recent University of Texas poll, a majority of the state's Hispanic population now has an unfavorable view of the law - with a stunning 41 percent saying they have a "very unfavorable" opinion of this new system. Overall, Texans are deeply opposed to the law, with just about half saying their view is "very unfavorable."

Among Hispanics, views of the law have worsened significantly during the enrollment period, and continue to trend negatively. In October, 46 percent of Texas Hispanics had an unfavorable view of the law, with 35 percent describing their views as "very unfavorable," according to the same poll. Earlier this month, a poll in Colorado found that 57% of Latinos in that state disapproved of the ACA. Nationally, a recent poll from PEW illustrated that Hispanics were split on the law, signaling a sharp drop in support since just late last year.

People who work for a living are likely to have issues with Obamacare. Hispanics tend to work rather than vote for a living, so their more apt to see the downsides.
Posted by Fritz at 11:06 AM