Spring is threatening to re-start here in Slower Maryland. Temperatures are rising towards 60, the wind is west, the sky is blue.  Of course, we're supposed to be getting more snow tomorrow evening with the arrival of what seems to be Tropical Winter Storm "Vulcan." 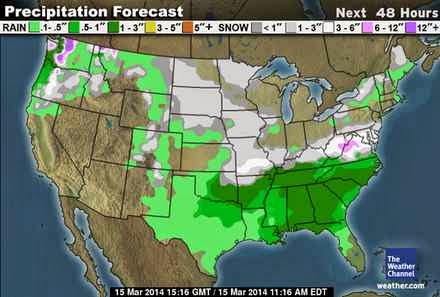 Like winter, Obamacare Schadenfreude just keeps giving and giving: In jam over Obamacare, Dems don't know which way to turn


When it comes to Obamacare, many Democrats take comfort in polls showing a small majority of voters, or at least a plurality, oppose repealing the Affordable Care Act. To them, that proves the Republicans' do-away-with-it position is out of sync with voters as this November's midterm elections approach.

The argument shows how far Democrats have retreated from the heady days when they rammed Obamacare through Congress over unanimous GOP opposition. Democrats can't argue that most people actually like the new law, and indeed many Democratic candidates have adopted a new mantra that it needs to be "fixed." But at least voters don't want to scrap it altogether.

The Journal found that 47 percent of those surveyed would be more likely to support a candidate who favors repeal, while 32 percent would be less likely, and 19 percent said it made no difference either way.

Of course, the democrats argue for "keep and fix," but other than Obama changing the rules on the fly for convenience and political purposes, the democrats have shown absolutely no will to fix it:

When Health and Human Services Secretary Kathleen Sebelius appeared before the House Ways and Means CommitteeWednesday, she was asked by Republican Rep. Tom Reed for "any suggestions … in areas that you want to fix the Affordable Care Act."

"Has there been any legislation from the administration sent up to Congress in regards to those fixes?" Reed asked.

"I have not sent legislation to Congress, no sir," Sebelius answered.


The Hill reports that House Democratic leadership has begun whipping their caucus to oppose a bill that would fix ObamaCare’s damage to Medicare — even though Republicans want the same kind of delay that the White House has been unilaterally imposing on everything else:


Democrats are furiously whipping their caucus against a Republican bill that would pay for a bipartisan Medicare fix by delaying ObamaCare’s individual mandate.
That’s a change: Rep. Steny Hoyer (D-Md.) did not whip a similar Republican bill earlier this month to remove the penalty for not buying insurance in 2014. The bill passed the House and picked up 27 Democratic votes in the process.
But Democrats desperately need to circle their wagons around the healthcare law after a devastating setback in Florida this week, where their loss in a special election exacerbated worries that ObamaCare will sink the party in this year’s midterm elections.

HHS Secretary Kathleen Sebelius: We've Made "Changes in the Way the Law Was Written," Is All


Inadvertent omission. If you ask someone enough questions, eventually they slip up and say something close to the truth.

Asked if the White House had any ideas to fix the law, Sebelius answered:


“We have implemented a number of changes in the way the law was written to ease the transition into the marketplace for consumers, insurers and employers.”

The White House is usually vague about its authority to make changes, usually claiming some kind of ambiguity in the law that can only be resolved by executive rule-making. (For example, when the law says that the Individual Mandate must take effect by January 1st, 2014, this is "ambiguous," and permits Obama to interpret it as "sometime after the 2016 presidential elections.")

But here Sebelius they've actually changed the way the law is "written."

Obama himself has offered no improvements to the law, he's simply using this comfort with the sports and entertainment industry in an attempt to stump for cooperation with the unpopular law:


LeBron James told Bleacher Report this week that President Obama called him to ask for his help in promoting the Affordable Care Act. On Friday, a commercial starring James was released.

“Any way I can help the president, that’s pretty cool,” James told the website.

The Grammy-winning president told Seacrest that if young people don’t sign up for Obamacare, “If you get into an accident, or heaven forbid, have an illness or someone in your family does and you do not have health insurance, it can bankrupt you or you may not get the treatment you need.”

Seacrest referenced the ”dad jeans” joke, and the president quipped he was “unfairly maligned” for wearing them. “The truth is, generally I look very sharp in jeans. There was one episode like four years ago in which I was wearing some loose jeans mainly because I was out on the pitcher’s mound and I didn't want to feel confined while I was pitching and I think I've paid my penance for that. I got whacked pretty good. Since that time, my jeans fit very well.,” said Obama.

Cash prizes for signing up for Obamacare?


With roughly two weeks left in the open enrollment period for health insurance, some groups are trying to sell Obamacare to young people in terms they might actually understand: music, comedy, and cash.

Young Invincibles, a nonprofit organization based in Washington, D.C. that is focused on the economic issues affecting young adults, launched a sweepstakes last week where it is awarding a cash prize of $1,200 — enough to potentially cover a year’s worth of health insurance premiums for a young adult — to people who download their health care app or submit a card in the mail. The contest runs through the fall, but by launching it now, organizers hope young people who download the app can use it to learn more about whether they qualify for financial assistance and where they should go to sign up. “This last month is going to be a huge push for educating young adults,” says Jen Mishory, deputy director for Young Invincibles.

As a non-profit, I suppose it's their money to waste (although, I'd like to see if this isn't grant money from HHS), but why not give me a cash reward for paying my income taxes instead?

I can't say this one surprises me: Obamacare enrollment lagging in states with highest uninsured rates


. . .So I decided to do a little experiment. All else being equal, I postulated, if Obamacare sign-ups were mostly coming from the ranks of the uninsured, then states with the highest percentages of uninsured should be signing up the most people on a population-adjusted basis.

I took the latest sign-up figures from HHS for the Oct. 1-March 1 period for each state and divided that by state population, based on the latest Census estimates. That gave me a list of every state, ranked by the proportion of the state population that signed up for a plan through one of the exchanges.

I then compared that list to Kaiser Family Foundation data on the percentage of uninsured by state in 2012 and boiled my findings down to the table below, which lists the states with the top 10 percentages of uninsured before Obamacare's exchanges opened, and then shows where those states rank on Obamacare signups by percentage of the population. 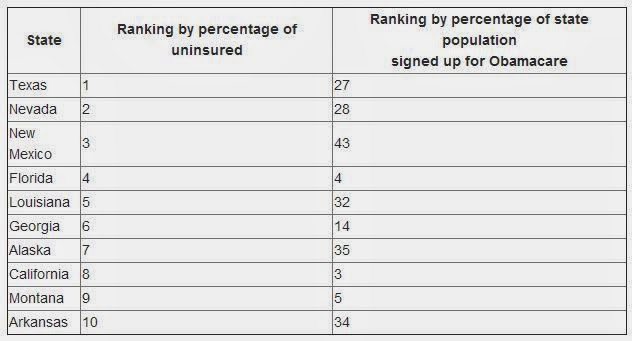 To be clear, I'm not saying this proves anything definitively, as there are plenty of variables involved. This analysis does not include Medicaid enrollment, for instance, because about half of the states aren't participating, so the numbers wouldn't be comparable. Additionally, Florida and California are among the nation's largest states, so they'll drive national data more than, say, New Mexico.

But if Obamacare is to make a more significant dent in the number of the uninsured, it’s probably going to need deeper penetration into those states with the highest rates of uninsured residents.


A Folsom company says it enrolled its employees in an insurance plan through Covered California, but they don’t have any access to their health insurance.

“If I call Covered California, they don’t talk to me. They tell me to go to my broker,” said Paul Curry, “but my broker says they aren't talking to him.”

It’s a helpless and frustrating feeling for Curry as he followed all of the steps to get health coverage for his four full-time employees. But after three months, Covered California has still not activated the health plans.

“We've paid each month, and none of my employees have cards,” he said. “We can’t go get health care.”

“I’m scared that I don’t have coverage,” says Linda Mestling.

She says she paid Blue Cross Blue Shield of Illinois but doesn't have a valid policy. Joe Mabus says he has been billed multiple times for the same premium.

“The funds have been withdrawn from my account,” he says. He says the insurer can’t answer his questions and tells him, “We’ll get back to you.”

So, one of those people who wanted and had insurance before Obamacare screwed the pooch.
Posted by Fritz at 12:06 PM