America’s cows now have a bigger impact on climate change than the country’s burgeoning shale gas industry. That’s according to a recent EPA report assessing the current state of greenhouse gas emissions in the United States. The Breakthrough Institute has more:

The environmental movement has long pointed to so-called “fugitive” methane emissions from natural gas extraction and transportation in their arguments against the recent shale revolution. Methane is a particular potent greenhouse gas, which means pipeline or well casing leaks can have outsized consequences for climate change. But a 2012 study of methane emissions, on which many greens based their anti-fracking arguments, had critical methodological flaws. We’re still refining our understanding of fugitive emissions, but it seems clear now that the climate dangers of shale gas were overstated.

But what about the estimated 60 million Bison in the northern hemisphere prior to the settlement of Europeans?  Bison are basically big cows, and have the same methanogenic digestion. Do we at least get to take credit for largely eliminating that threat to the worlds delicate climate?

I'm not particularly sanguine about the threats of methane to the climate.  Despite it's power as a greenhouse gas, estimated at about 25 times more powerful than CO2 on a 100 year basis, methane concentrations are not currently increasing at anywhere near the rate of CO2 despite drastically increased natural gas production: 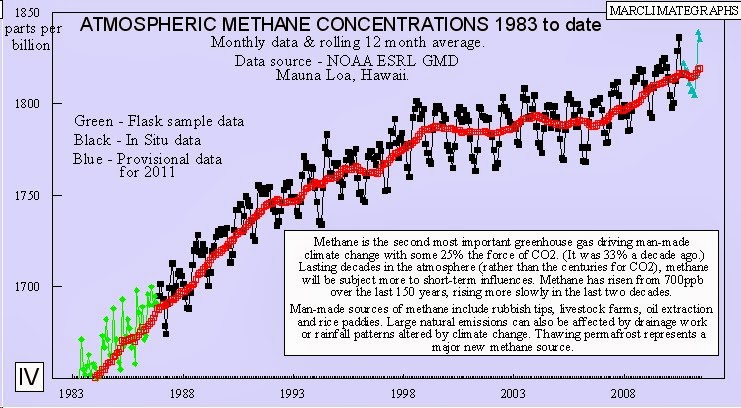 Moreover, if the government were really worried about methane emissions, they could do something about all the natural gas leaks in Washington D.C. and other cities.
Posted by Fritz at 2:58 PM