Obamacare Schadenfreude Nipping at Your Nose

It's a cold and frosty morning here.  Temperatures were well below freezing, and with yesterdays wet snow and snush, everything thing was coated with a thick coat of frost.

A quick Schadenfreude post this morning, because I'm late, and because the material seems to be drying up, or at least becoming more repetitive.

... just as predicted, at 11:15 students started coming to the Generation Opportunity tents. They happily listened to the organization’s staff talk about its “Opt-Out of Obamacare” campaign and signed pledges to do just that on the group’s iPads before leaving with green and yellow Mardi Gras beads (“We try to cater to the area we’re going to,” Patrice Lee, outreach manager for the group, told me) and Opt-Out koozies, sunglasses and bottle openers. Along with the students came cases of Bud Light, bottles of Andre, jugs of Fireball Whiskey and handles of vodka, gin and rum. Generation Opportunity’s beer pong table was swiftly put to use.
...
We’ve found that without a doubt, our message that they can take control of their healthcare and choose to ‘opt-out’ of Obamacare and find a better deal for themselves by buying private insurance outside of Obamacare, that message has really resonated with them because they’re really worried about Obamacare,” he continued. “They don’t want to buy Obamacare.”

Zepeda and his friends Lane Bullock, a fellow junior, and Stephen Fox, a pre-med student, expressed the very concerns Feinberg outlined. “I think the free market should work out health care. I think it should be privatized. The government shouldn’t get involved,” Fox said. “Young people don’t need it—the majority that is—I mean we’re all healthy,” he said nodding in the direction of his friends.

“Also I feel like its being forced on you,” Zepeda said, following his friend’s lead. “No one should have to be forced to do it.”

In the first two months the state and federal healthcare reform marketplaces have been open, young adults have been signing up at a much slower rate than necessary to keep the exchanges afloat financially. As a result, groups like Enroll America, a 501 (c)(3) non-profit, have been traveling across the country trying to get more Millennials to sign up. 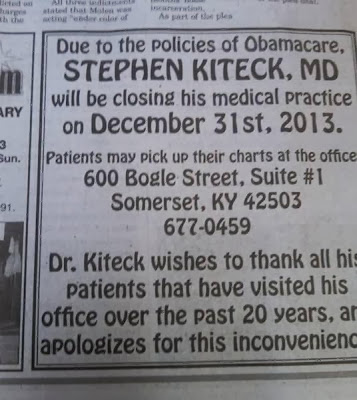 So, why would Doctors quit in the face of Obamacare (I mean besides all the obvious):


Here’s the raw deal: The Affordable Care Act created a 90-day grace period before insurers can drop patients who fall behind on premiums. So, delinquents who obtain tax-subsidized health insurance through an Obamacare health insurance exchange have three months to settle up their bills prior to their policy being canceled. As written, the law puts insurers on the hook for the grace period.

But the bureaucrats at the Centers for Medicare and Medicaid Services decided to issue a rule in March making insurers responsible only for paying claims during the first 30 days of the debtors’ grace period. Who’s on the hook for the other two months? Well, customers are entrusted to foot the bills for additional services. But if they blow off the payments, it’s up to physicians and hospitals to collect.

In real-world practice, this means providers will be eating untold costs. Several large hospital associations raised red flags over the issue this summer. In August, the Missouri Hospital Association noted that the regulatory shift “unduly burdens physicians, hospitals and other health care providers” by making them directly collect payments from patients, which “puts them at an unfair and significant risk for providing uncompensated care to patients.”

Santa Clara County, Calif., officials have banned a 20-year employee from making “less than positive” remarks about Obamacare, because they can cause stress for listening co-workers.


The county made the stunning move when Norina Mooney was chatting with a co-worker about the Affordable Care Act, according to the Pacific Justice Institute, which is representing the woman.

Santa Clara County, Calif., officials have banned a 20-year employee from making “less than positive” remarks about Obamacare, because they can cause stress for listening co-workers.

Stacy McCain wants to remind every one of an incident early in the Obamacare rollout: Have You Forgotten?

Oh, yeah: It was the day of the final congressional vote on ObamaCare, and the Tea Party crowd at the Capitol was shouting, “Kill the bill!”

Andrew Breitbart offered a reward of $10,000 — subsequently raised to $20,000 and then to $100,000 — for anyone who could produce evidence that anyone shouted the n-word that day. Nobody ever collected the reward, because the narrative was a lie.

Breitbart pointed out that there was a “sea of New Media” outside the Capitol that day. Everybody had video cameras or cell-phone cameras going, and if anyone actually had shouted the n-word, certainly someone would have collected that reward.

Nobody ever did. More than three years have gone by. Now ObamaCare is law, and very unpopular, and one of the biggest lies of our time — that the Tea Party’s opposition to ObamaCare was motivated by racism — has been conclusively debunked by the shameful silence of the Democrats who could not produce the proof of their lie.

Oh, but the Democrats never apologized, did they?

The media never apologized, did they?

And what has the passage of ObamaCare meant to America?

“If you’re covered and you like your insurance, you can keep it,” said Congressman Gary Peters in August 2009.


Gary Peters made that pitch knowing it was false, and it cost at least 225,000 people in Michigan their health care. Despite these facts, Gary Peters has refused to admit his deception or apologize to the people he hurt.

That’s just one Democrat in Michigan, but is true of all Democrats everywhere. They rammed ObamaCare through Congress on a party-line vote. Not a single Republican voted for the bill. The Democrats and their media allies lied and lied and then lied some more.

Wombat-Socho got the master Rule 5 Sunday post up on "Rule 5 Monday" this week.
Posted by Fritz at 10:18 AM