Sort of a cool misty morning here in slower Maryland.  At least three cup of coffee morning. But the air is no clearer on the fate of Obamacare.  Right off we find some top shelf schadenfreude.

Millennials Abandon Obama and Obamacare: A majority of America's youngest adults would vote to recall the president.


Young Americans are turning against Barack Obama and Obamacare, according to a new survey of millennials, people between the ages of 18 and 29 who are vital to the fortunes of the president and his signature health care law.

The most startling finding of Harvard University's Institute of Politics: A majority of Americans under age 25--the youngest millennials--would favor throwing Obama out of office.

Yes, but Obama is in office now, and nothing short of  being found in bed with a live boy or a dead girl is going to get him out in the next three years.

As they say somewhere "Too soon oldt, too late schmart."  But it adds up to bad news for the demographic plan that lie behind Obamacare, to enlist the "young invincibles" to pay through the nose to support the sick and aging:


Fewer than one-third of young, uninsured Americans say they are leaning toward enrolling in a health-care plan under the new Obamacare exchanges, according to a new poll -- a number that, if it holds, would present huge problems for the new law.

In order to keep costs down, the Affordable Care Act relies on younger, healthier people signing up for coverage to offset the costs for older, sicker Americans. But a Harvard University Institute of Politics poll shows just 29 percent of uninsured 18-to-29-year olds say they will definitely (13 percent) or likely (16 percent) enroll in the Obamacare exchanges. When the question describes the law as the "Affordable Care Act" rather than Obamacare, just 25 percent say the are leaning toward enrolling or will enroll.

But millennials  are quick on the uptake compared to the people who write for the New Yorker.


So yes, I’ll subsidize someone else’s prenatal coverage, in a more effective way than I’ve been doing by default under the current system, in which too many pregnant women show up in emergency rooms without having had such care, creating problems for themselves and their babies, and all sorts of costs for taxpayers. And I’ll remember to be relieved that my own access to health care is guaranteed. But they had better work out the problems with the A.C.A.; if they don’t, and it doesn’t fulfill its promise of insuring the uninsured, I’m really going to feel like a chump.

Even though you read the New Yorker, you're not quite good enough to be exempted, like Harry Reid's staff:


I thought everyone was going to love this law?


(CNN) Democratic Senate Majority Leader Harry Reid, one of Obamacare’s architects and staunchest supporters, is also the only top congressional leader to exempt some of his staff from having to buy insurance through the law’s new exchanges.

Reid and his personal staff will buy insurance through the exchange.

But it’s also true that the law lets lawmakers decide if their committee and leadership staffers hold on to their federal employee insurance plans, an option Reid has exercised.

Who wants to bet that Reid and and other Dem leaders find a way to circumvent having to enroll themselves by the end of 2014?

The Obama regime is arguing that it is nonsensical to read literally the law as it is written.

The plaintiffs in Halbig v. Sebelius say the plain text of the ACA, also known as ObamaCare, limits subsidies to applicants in states that have set up their own exchanges.

"Congress figured because it was loading up the state exchanges with a lot of goodies that just about every state would make the choice to participate,” said Sam Kazman, general counsel for the Competitive Enterprise Institute.

The administration was "unpleasantly surprised" when dozens of states "said thanks, but no thanks," Kazman said. He believes the IRS is acting in concert with the administration to extend those attractive subsidies to all states – including those that opted out, an interpretation which gives rise to both employer and individual mandates and penalties – critical to helping fund the ACA.

What do laws mean if they can be rewritten at will by the President? Why must we obey laws if the President does not? Since when are we to obey what democrats say they intended rather than what is codified in a law they wrote?

It's almost like they had to pass the law to see what was in it.  And once they did, they realized it was written by Harry Reid's  summer intern.

Charles Krauthammer thinks that Obama's regard for his own inflated rhetoric is "sort of touching."


Krauthammer told panelists he didn’t “agree that the website issue is over,” calling it a “catastrophe” and the law “absolutely nonfunctional.” He seemed shocked at the president’s hope that a public relations campaign will turn things around.

“Obama — I mean, it’s sort of touching the way he believes in the power of rhetoric, his rhetoric, in denying and trumping reality,” he said. “He can’t. He can issue all the words he wants, but unless he fixes what’s out there — people are experiencing the cancellations, experiencing the pauses, and if they show up on January 1 thinking they are enrolled in a plan, see a doctor at current expense and aren’t, that’s going to be the end for Obamacare.”

The White House continues to talk a lot about Obamacare, without saying very much at all. Din of Spin: Obama's Dangerous Balance


President Obama is striking a dangerous balance. Starting today, he must simultaneously refocus Americans on the potential benefits of Obamacare without shredding his credibility further by minimizing its flaws.

That dilemma had White House officials twisted in knots Monday. On one hand, they acknowledged that the cornerstone federal website is not working as smoothly as it should. But you could hardly hear the disclaimer over the din of spin, as the White House launched an aggressive "offensive" from a defensive crouch.

"Healthcare.gov met our self-imposed November 30th deadline and even as we continue to make improvements to the website, we'll also remind the public about how the Affordable Care Act is already making a positive difference in the lives of millions of Americans today," said Josh Earnest, a White House spokesman. "The benefits of these consumer protections will only accumulate in the weeks and months ahead."

It's "Train wrecks all the way down" according to the Instpundit, who says if they're not talking about it, it means they're hiding some more bad news.

Insurers still don’t know the full extent of the problems associated with back-end issues on healthcare.gov and are wary of Obama administration officials’ claims they are fixing the problem quickly and fully.
. . .
But they are providing few details about computer-generated errors that have affected roughly one-third of consumers who have signed up on exchanges over the last few months, according to a report in the Washington Post.

Today's final word goes to Stacy McCain, for this tweet: 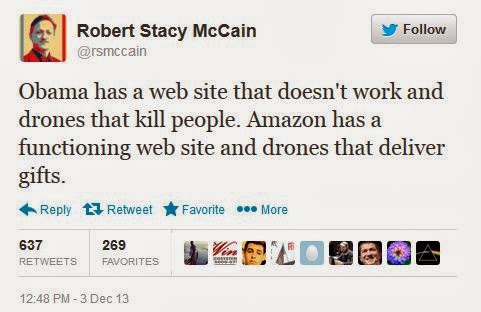