A recreational fishing group is taking issue with Maryland's plan to increase the allowable catch of striped bass in the Chesapeake Bay next year, calling it "imprudent" in light of troubling trends in the coastwide population of the highly prized migratory fish.

Coastal Conservation Association Maryland has written Natural Resources Secretary Joseph P. Gill urging him to rescind his agency's decision to raise the annual harvest quota for striped bass, or rockfish, by 14 percent in 2014.

DNR announced last month that Maryland, Virginia and the Potomac River Fisheries Commission had decided that recreational and commercial fishermen could safely harvest nearly 8.7 million pounds of striped bass from the bay next year, the first increase in allowable catch in many years. Officials said the increase from this year's limit of 7.6 million pounds was deemed to be warranted because many of the fish that spawned in near-record numbers in 2011 will have grown large enough next year to be legally kept if caught. 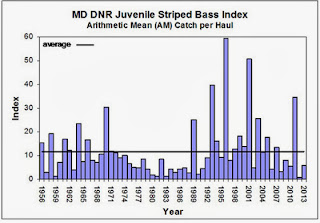 My own experience contradicts the officials assurances that there are plenty of striped bass left in the Bay, and I firmly believe that a single good year class in the middle of a recruitment desert should not be used as an excuse to raise the limits, when politically, it will be very difficult to reduce these limits in subsequent years.