If they can ever find it. Historic Harriet Tubman Sites at Risk of Rising Seas on Eastern Shore "New study from Climate Central finds several sites on Harriet Tubman Byway could face chronic flooding this century"


As a tour guide on the Eastern Shore’s Harriet Tubman Byway, Alex Green has an up-close view of historic landmarks associated with the iconic abolitionist.

Such as Long Wharf, now a park on the water’s edge of Cambridge, which once served as a hub for the trans-Atlantic slave trade. Stewart’s Canal, a seven-mile logging waterway dug by enslaved and free Black people. And the Bucktown General Store, where a young Tubman sustained a brutal head injury during her first act of defiance against an enslaver.

“This is African American heritage and history in this area,” said Green, who calls this part of the world Tubman Country.” “I’ve done tours where people just cry.” 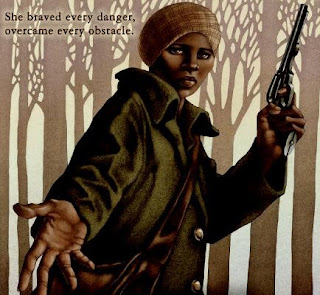 Those greenheads and mosquitos can have that effect.


Harriet Tubman experienced a life-changing head injury while she was in this store as a child. Learn how a family in the area brought this historical site back to life.

But Green, who has lived in the region for decades, has noticed something changing on those historic sites as the years have passed. The water, he said, “is coming closer and closer.”

Green is well aware that rising seas are affecting communities like his. The seas are rising faster along the mid-Atlantic than in most parts of the world, with the sinking of land from natural forces conspiring with sea level rise from climate-changing pollution to push coastlines inland.

Sea level is rising in this area, slightly faster than the world average of about 2 mm/year due mostly to settling, but it has been going on as long as men have been keeping accurate records in the area. Climate change caused by CO2 release has nothing to do with it, other than the slow melt of the ice left over from last ice advance.

The science and news group Climate Central used its coastal database to pinpoint risks from rising seas to some of this area’s most precious Tubman landmarks. The group published its findings on Tuesday, showing many of the most significant sites along Maryland's portion of the Tubman Byway are already experiencing or are in jeopardy of chronic flooding from sea level rise.

Climate Central analyzed 45 sites along the byway, which stretches from Maryland to Delaware, and found 16 of the sites will experience significant flood risk by 2050; 25 of them face such threats by century's end. The report singles out 10 significant places around Dorchester County as likely to face occasional, frequent or chronic risk of flooding this century.

"It's entirely possible that some of the sites are going to be so badly flooded that they really won't be very accessible to the public anymore," said Karen Florini, the non-profit's vice president for programs, adding: "The main message is that climate change is real, it is serious, there is scientific consensus and there are things to be done.”

Nobody ever asked for my vote. Yes, sea level rise will continue, at least until the start of the next ice advance, which will be bad news for civilization. If we're lucky, our adding CO2 to the atmosphere will forestall or even avert that event. It's the least we can do for our descendants.
Posted by Fritz at 7:44 PM