Election 2020: Arizona and Beyond

I was a little afraid I'd regret having put up yesterday's Russiagate post, thinking I might not have enough election coverage to be worthwhile, but a couple of reliable sources came through at the last minute.

The audit itself must be triggering a concern for the media as they started today accusing any audit supporters of being conspiracy theorists. The AP Headline: “Election conspiracies live on with audit by Arizona GOP”


“PHOENIX (AP) — Months after former President Donald Trump’s election defeat, legislative Republicans in Arizona are challenging the outcome as they embark on an unprecedented effort to audit the results in the state’s most populous county.

[…] The process is alarming election professionals who fear the auditors are not up to the complex task and will severely undermine faith in democracy.” (more)

Obviously, in typical Alinsky fashion, the intent of the AP narrative is to isolate, ridicule and marginalize supporters of the Maricopa audit.

Meanwhile, below is a video update on this Arizona issue which includes a passionate speech by Bobby Piton who wrote a letter to the Democrats and Republicans in the Arizona State Senate. . . .

Via Hot Hair, NYT whines Six months after Trump's defeat, AZ Republicans are recounting the vote. Anybody remember how many different media groups and lawyers recounted and investigated the results of the 2000 election, Bush v. Gore, desperately trying to prove that Algore won? I wonder why they're not taking this attitude now?  Monica Showalter at Am Think thinks Fraud: Democrats reveal their hand in Arizona vote recount debacle. They sure don't want these votes recounted by hand, for some reason.
And it's really not about the 2020 election, but it is, kind of, from Insty, THEY’LL BE MADE TO KEEP HOLDING VOTES UNTIL THE DESIRED RESULT IS ACHIEVED:


Biden Labor Board Invalidates Workers’ Vote to Reject Union. “The National Labor Relations Board overruled hundreds of Delaware poultry workers who had voted to reject union leadership. The agency said in a 3-1 ruling released Wednesday that a provision prohibiting workers from leaving a union for a set time period after a contract is signed allowed the board to ignore the workers’ March 2020 vote. The decision reversed a regional NLRB director who had initially ruled in the workers’ favor.”

Votes only count when they help the ruling party.

On the Capitol Incursion, Sen. Johnson asks the Capitol Police: Why Did Your Jan. 7 Press Statement Say Officer Sicknick Died 'Due to Injuries'?

He continued, "It remains unclear why the USCP released a statement regarding Officer Sicknick’s cause of death months before the medical examiner made an official determination. Following USCP’s claim that Officer Sicknick died 'due to injuries sustained while on-duty,' false reports about those injuries began to emerge."

"For example, the day after USCP released its statement, the New York Times reported that Officer Sicknick 'was struck by a fire extinguisher,'" wrote Johnson. "During President Trump’s second impeachment trial, the House Democrat impeachment mangers used this false report to claim, in a trial memorandum, that the 'insurrectionists killed a Capitol Police officer by striking him in the head with a fire extinguisher.'"

The letter then presents eight questions, and several sub-questions, Sen. Johnson wants the Capitol Police office to answer. Among them are the following,

-- "What was the basis for USCP’s claim on January 7, 2021, that Officer Sicknick 'passed away due to injuries sustained while on-duty'"?

-- "When did the USCP become aware that Officer Sicknick was not struck with a fire extinguisher?"

-- "Did the House impeachment managers contact USCP in an effort to confirm Officer Sicknick’s cause of death?"

-- "[D]id USCP contact, or attempt to contact, the House impeachment managers to address the claim in their trial memorandum that stated, 'insurrectionists killed a Capitol Police officer by striking him in the head with a fire extinguisher'"?

-- "Have you directed the Office of Professional Responsibility and/or the Office of Inspector General to investigate how the January 7, 2021 USCP press release was developed and approved for release? If not, why not?"

-- "Is the USCP investigating whether members of the USCP provided inaccurate information to the New York Times in connection to its January 8, 2021 article about Officer Sicknick’s death?"

Nice Deb at Am Great reports Capitol Rally Attendee Says FBI Interviewed Her About Jan. 6 Tweets; Were Embarrassed About Having to Investigate ‘Stupid’ Tips Mean Tweets! Hang her! 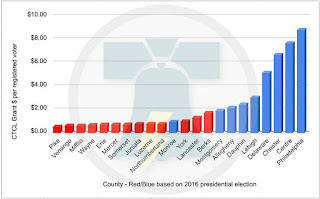 The best election money could buy. Front Page has another article on how Facebooks Mark Zuckerberg attempted (and may well have succeeded) in buying the Biden vote in Pennsylvania, Zuckerberg Funded 2020 Election Grants in at Least 21 Pennsylvania Counties "The money skewed heavily toward PA’s ‘blue’ counties."