The lead story today is that Jame's O'Keefe of Project Veritas fame came out with a new "hidden camera" video with a CNN director in which he admits (well, brags really) that CNN's open opposition to Trump may have been enough to tip the election against Trump. I don't believe that; I'm still convinced there was enough election chicanery in the "5 cities"  to turn the election. Fox, CNN staffer admits network's focus was to 'get Trump out of office,' calls its coverage 'propaganda'

A staffer for CNN spoke candidly to an undercover journalist about the political motivations the network had during the 2020 presidential election, boasting the left-leaning outlet helped defeat former President Donald Trump and even calling his own employer "propaganda."

In the first installment of what's billed as a three-part #ExposeCNN campaign from the right-wing guerilla news outlet Project Veritas, network technical director Charles Chester shed light on how the network wanted to remove its nemesis from the White House and help now-President Biden.

He also says "Climate change is going to be the next Covid thing for CNN."

And he says that this is dictated by Jeff Zucker.

So the next time they tell you to give up burgers (while they eat Kobi beef) to save the planet, you know your being gas-lighted. Now, news sources being biased is nothing new in America; it's been true from before the Revolution. What's new is the claim of objectivity, which is the real "Big Lie." 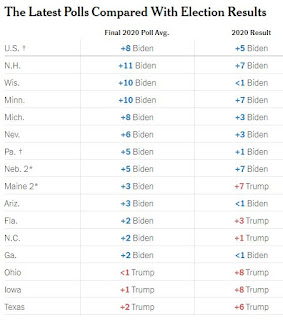 The other "newish" news is the revelation that Democratic pollsters admit they fucked up the election results, and still aren't quite sure why. John Sexton at Hot Hair, Dem pollsters: Our 2020 polling had 'major errors' (and we're still not sure why)

Reading between the lines, I think these Democratic pollsters are hoping that all of this error is tied to President Trump and therefore, if he doesn’t run again, the 2024 polling will suddenly be more accurate. But was it hidden Trump voters who re-elected Susan Collins as well? I guess I’d need to see some more data before going with that idea.

Insty: I didn’t trust them then, and I still don’t.

Plus: “When GW Bush won a disputed election in 2001, the media, led by the NYT and WaPost, immediately dispatched hoards of journalists to count every vote. I always assumed that they were looking to discredit the Bush election. Has anything like that happened after the 2020 election? I must have missed it. The fact that the media has turned a blind eye to what could be a huge story tells me all I need to know. And what did polling of Democrats look like in 2001? Most of the Democrats I know are still convinced that GW Bush stole that election.”

That’s different because shut up.

I have enough statistical training to be dangerous, and I wouldn't relish the job of being a pollster in today's world.

This is not a bad segue into the notion of election fraud. Paul Bedard at WaEx, Stuck: Most still say Biden ‘cheating’ beat Trump, but even writing such things down can get you banned on social media, Callie Peterson at WaEx, YouTube bans Sebastian Gorka's channel for repeated violations of 'presidential election integrity policy'

Gorka's show, America First, was removed sometime over the past three days. The Washington Examiner can confirm it was live as recently as Thursday. The show features right-wing commentary on politics "to be the new front lines in the ongoing Culture War against the Left," according to a description on Apple Podcasts.

"In accordance with our long standing strikes system, we terminated the channel America First with Sebastian Gorka, for repeated violations of our presidential election integrity policy," Ivy Choi, a YouTube spokesperson, told the Washington Examiner on Sunday. "As we’ve publicly shared, our presidential election integrity policy prohibits content uploaded after last year’s safe harbor deadline that alleges widespread fraud or errors changed the outcome of the 2020 U.S. presidential election. Any channel that violates this policy will receive a strike and channels that receive three strikes in the same 90-day period are permanently removed from YouTube, as in the case of America First with Sebastian Gorka."

It has not escaped my attention that Google owns both YouTube and Blogspot. Matt Margolis again, Trump Slams Supreme Court for Not Having 'Courage' to Hear Election Challenges

On the Georgia "voter integrity law" and associated nonsense, Via the Wombats In The Mailbox: 04.13.21, The Geller Report reports Wifebeater Warnock Admits To Signing E-Mail Lying About Georgia’s Election Reform Law Greg Piper at JTN, Georgia probe of Stacey Abrams-tied group ongoing with fight over subpoenaed documents "New Georgia Project appealed ruling ordering it to turn over records that may show "illegal campaign activities." If you don't have anything worth hiding, why are you trying to hide it? Rasmussen Reports, Election Integrity: 62% Don’t Think Voter ID Laws Discriminate, Breitbart, 62% of Voters, Including 59% of Black Voters, Say Voter ID Laws Do Not Discriminate. It's just a stupid charge. When all you have is a hammer. . . .

Stephen Greene at PJ, Insanity Wrap #186: Woke Corporations Hand Out Millions to Rioters, Get Looted Anyway. I'm beyond sympathy. You get what you pay for. Sundance is reporting Lawfare Activated – 16 Top Leftist Law Firms Plan “SWAT” Teams to Battle State Election Reform Legislation. Via the Wombats In The Mailbox: 04.13.21, Outkick has Senators Cruz, Hawley, & Lee Seek To Strip MLB Of Antitrust Exemption. That would be a start. Tax them, too. Kamala needs new shoes. Leah Barkoukis at Town Hall, NCAA Will No Longer Allow Championships to Be Held in States That Protect Female Athletes. I don't care; the sooner women's sports is ruined by the transgenders, the sooner we can expect to see reform. Maybe by the time Gabi gets to high school.

Also via the Wombats In The Mailbox: 04.13.21,Julie Kelly Am Great,  Indefinite Incarceration For Protesters With “Wrong” Politics.

Tyler O'Neil again, GOP Sellout John Boehner Reveals Who He Voted for in 2020. To cut the suspense, Time, Despite criticism, Boehner voted for Trump in 2020. Yeah, he knew Biden world would be bad. Sundance reports Laughable, Nikki Haley Says She Will Back Trump and Stand Down if He Runs for Reelection in 2024. He's much less fond of her than I am. In the words of Ronald Reagan, "The person who agrees with you 80% of the time is a friend and an ally, not a 20% traitor."