The homesite where famed abolitionist Harriet Tubman likely spent time with her father before escaping slavery and leading others to freedom has been discovered in Dorchester County, MD. The forested site is located on land added last year to Blackwater National Wildlife Refuge.

Maryland and federal officials announced Tuesday that a state archaeological team uncovered a trove of artifacts at the site believed to be where Tubman’s father, Ben Ross, had lived in a cabin during his enslavement and which he owned outright as a free man by the 1840s.

The site was found on a 2,600-acre tract that the U.S. Fish and Wildlife Service bought last year on Peters Neck, a mostly wooded peninsula southwest of Cambridge. It was purchased for $6 million to give the extensive marsh at the Blackwater refuge room to migrate inland as climate change raises sea level around the Chesapeake Bay.

The property includes 10 acres that records show had been bequeathed in the early 1840s to Ben Ross by Anthony Thompson. Ross had been enslaved by Thompson, who in his will directed that Ross was to be freed and granted the land five years after Thompson’s death, which occurred in 1836.

A team of archaeologists from the Maryland State Highway Administration began investigating the tract in November 2020. The team returned in March and found numerous artifacts dating to the 1800s, including nails, brick, glass, dish fragments and even a button. Their discovery confirmed the location of the Ross homesite.

If Google Earth is to be believed, the site is just about 14 miles due east of us, across the Chesapeake Bay, Taylors Island and into the Blackwater Wildlife refuge. It would be 2+ hours by car, up to Annapolis and back down. 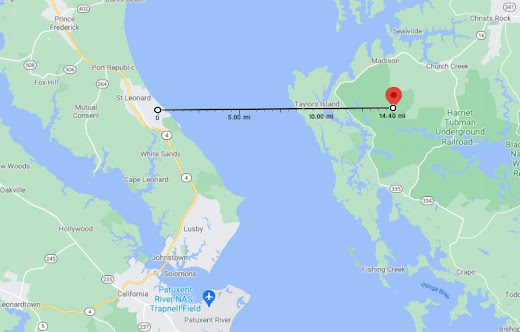