There were two big events yesterday. First, the DC coroners office released the report on Capitol policeman Brian Sicknicks death, revealing he suffered two strokes on the day after the Capitol incursion, and no evidence could be found which linked his death to the riots, busting media memes everywhere, and leaving any potential murder charges against the people who allegedly bear sprayed him during the riots in doubt. But I don't doubt they'll continue to try.

Second, after Congressdemon Maxine Waters (D-Hell) called for continued heightened  violence in the streets if Derek Chauvin was not found guilty of first degree murder (which isn't likely, because he isn't charged with it), the case went to the jury, and the judge had strong words (but no action) regarding her public statements.

The ruling, released Monday, likely will make it difficult for prosecutors to pursue homicide charges in the officer’s death. Two men are accused of assaulting Sicknick by spraying a powerful chemical irritant at him during the siege.

In an interview with The Washington Post, Francisco J. Diaz, the medical examiner, said the autopsy found no evidence the 42-year-old officer suffered an allergic reaction to chemical irritants, which Diaz said would have caused Sicknick’s throat to quickly seize. Diaz also said there was no evidence of internal or external injuries.

The coroner threw the Feds one bone, though, saying:

The medical examiner noted Sicknick was among the officers who engaged the Capitol mob and said “all that transpired played a role in his condition.”

In the trivial sense that everything that happens depends on what has already transpired. Which could be enough to get a DC jury to convict. Hey, at least he got a state funeral after it and got to lie in the Rotunda. PM, BREAKING: DC Chief Medical Examiner confirms Officer Brian Sicknick died of natural causes.  Bonchie at Red State, BREAKING: Cause of Death for Officer Brian Sicknick Released, Major Blow to Media and Democrat Narrative. Insty, SO THE STORY WAS ALWAYS A LIE "But notice how the lefties are going after Glenn Greenwald for pointing it out" Ace, Breaking: DC Medical Examiner Determines Brian Sicknick Died of Natural Causes, Specifically from Strokes

So the "Four Hour Insurrectionists" now officially killed zero people, and the Mostly Peaceful Protesters, who have been "protesting" for more than a year, have killed... quite a few more than zero.

Meanwhile, before calling for violence against police and civilians if the jury does not convict Derek Chauvin, Maxine Waters asked for... a police escort to protect her.

I watch this happen on the news yesterday afternoon. Spencer Brown at Town Hall, Judge: Maxine Waters' Actions 'May Result in This Whole Trial Being Overturned'. AllahPundit whines, Chauvin trial judge to defense: Maxine Waters's big mouth may end up getting this trial thrown out on appeal. Twitchy, Judge in Derek Chauvin case says Rep. Maxine Waters may have given the defense something on appeal. Ace, Chauvin Judge: Sure, Maxine Waters' Threat of Neverending Riots May Cause This Case to be Reversed on Appeal, But I Won't Grant a Mistrial.

Unbelievable. You'd almost think that various elements of the Thug State are coordinating to make sure Chauvin goes to jail, even if completely innocent.

Remember, this judge previously refused 1, moving the trial to somewhere where the jurors would not be as emotional -- and as intimidated -- as they are, and 2, sequestering the jury so that they could not follow the news and would be somewhat insulated from public opinion -- and public threats.

He refused both of those.

Now, those decisions come back to invalidate the entire trial, because Maxine Waters has made extremely serious threats against both the city and, implicitly, the jurors themselves if they don't return a verdict that Burn Loot Murder can support.

Plenty of links to both of the topics above at the Wombat's In The Mailbox: 04.19.21: Twitchy: “He Was A Toy To Them” – Glenn Greenwald Goes On Righteous Rant Over The Media & The “Sicknick Truther” Smear, also, Buck Sexton – This Information Was Hidden From You On Purpose, Louder With Crowder:  Ted Cruz Calls Out Maxine Waters For “Encouraging Riots & Violence” After Minnesota Comments, The Geller Report: Gunmen Open Fire On National Guard In Minneapolis After Maxine Waters Incites #BLM Rioters, also, Marjorie Taylor Greene Moves To Expel Maxine Waters For Incitement To Violence & Murder, Legal Insurrection: Chauvin Trial Judge Says Maxine Waters’ Threats May Result In Guilty Verdict Being Overturned On Appeal, Power Line: Mob Rule In Minnesota, Shot In The Dark: This Is What Screwed Looks Like, Volokh Conspiracy: Court Order Protecting People Displaying Press Passes & Covering Protests In Minnesota, Weasel Zippers: #BLM Becoming More & More Like Homegrown ISIS Every Day, The Federalist: Corrupt Media Who Falsely Accused Trump Of Inciting Violence Are Silent When Maxine Waters Does Just That, also, Maxine Waters Demanded Armed Police Escort Before Calling For Violence At Minnesota Anti-Police Protest

But wait! There's more random election related material. For example, Ace has Senate Advances Bill to Make Calling Covid "The China Virus" a Federal Hate Crime So, will I get put in jail for calling it the "WuFlu?"

The utterly useless GOP voted in favor of this bill -- it got 92 total votes.

The Surrender Caucus' only demand? That they "soften" the language directly tying anti-Asian violence, committed nigh-exclusively by a core Democrat constituency, to Trump.

Glenn Ellmers at Am Great calls H.R. 1 The Pillow Over the Face of Federalism. That's one way to put it. The other might be a knife in the back or a bullet in the heart. 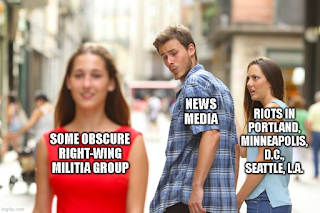 CNN (cited by Hot Hair) wants you to be incensed that Trump wants you to boycott Coke. His properties are still serving it. I'm sure he handles the purchasing for all his businesses.