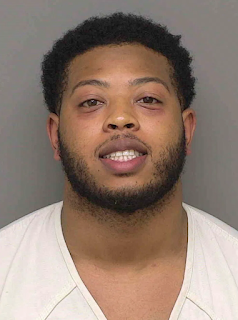 This is not merely “alleged,” it’s on video:

A Michigan state representative fought with paramedics and state police troopers then demanded to call Gov. Gretchen Whitmer (D) in a dashcam video released Saturday.
State Rep. Jewell Jones (D-Inkster) crashed his vehicle April 6 and allegedly assaulted first responders who attempted to assist him and his passenger.
The video appears to show Jones repeatedly defying orders from Michigan State Police troopers and issuing threats. . . .
MIRS News reported the passenger’s “pants were down” as she vomited near the vehicle. The representative’s pants were “partially down” when paramedics arrived at the location on I-96, according to police reports.
The video shows two troopers attempting to work with Jones to obtain his license, which the state representative refused to provide. At that point, they took him to the ground.
“Let me sit up, (N-Word),” Jones demanded of the troopers, one of whom was black.
“I’ll call Gov. Whitmer right now,” Jones allegedly threatened. He continued, “When I call Gretchen, I need y’alls’ IDs and badges.” . . .
“It’s not going to be good for you, I run y’all budget, bro,” Jones said, according to the video. . . .
Michigan State Police say Jones’s blood-alcohol level was .191 — more than double the .08 legal limit.

Get drunk. Drive your car into a ditch. Without pants. That’s basically the Democratic Party platform, right there. And I repeat: It’s on video.

The video deserves an Oscar in the "how not to act while being arrested" category:

Jones’s attorney, Ali Hammoud, denied that the lawmaker resisted arrest and said that “he was not threatening the officers in any way.”

“He was fully cooperative,” Hammoud told news outlets. “The officers decided to throw Representative Jones to the ground and three of them held him down, crushing him under their weight. The officers also tased Representative Jones in his head, causing memory loss and leaving scars that are visible to this day. They used so much pepper spray on his face that his eyes still appear profoundly red and swollen.”

Hammoud said that Jones’s claims about Whitmer and the police budget “was an attempt to stop them from using excessive force.”

I didn't see him physically resist arrest before the take down, but he would not (or possibly could not) produce ID when asked. I think they could have let him talk a little longer before they took him down. It might have produced a more humorous video.

As for how much pull he really has with Whitmer? I guess we'll find out.