Aaron Mate, the Nation? Uncovering Russiagate’s Origins Could Prevent Future Scandals "There are legitimate grounds to probe the intelligence officials behind the all-consuming Trump-Russia affair."


There is no doubt that Donald Trump would like to exact political revenge on those behind the Russia probe, and it is fair to be skeptical of his Department of Justice. But it would be a mistake to reflexively dismiss the inquiry, which is led by US Attorney John Durham and overseen by Attorney General William Barr. The public deserves an accounting of what occurred. And given the intrusion of the nation’s intelligence’s services into domestic politics, a failure to learn lessons and enact safeguards could leave future candidates, especially on the left, vulnerable to similar investigations.

Paul Mirengoff, Power Line, The Dems’ frivolous request that Barr recuse himself, Ace, Democrats Are Running the Exact Same Playbook in Russia Hoax 2.0 as They Did in Russia Hoax 1.0, Now Demanding (Stop Me If You Heard This One Before) That Trump's Attorney General Must Recuse Himself,. He must be over the target; he's getting flak.

Ace, Source: You Don't Impanel a Grand Jury Unless You Intend to Indict; Obama's Minions Have Reason to be Afraid


Wouldn't this be nice?

A number of former high-level Obama administration officials could fall into the investigative crosshairs of U.S. Attorney John Durham's team as his probe into the handling of the Russia investigation rises to the level of a criminal inquiry.
The elevation in status means the U.S. attorney for Connecticut will be able to subpoena witnesses, file charges and impanel grand juries.
"You do not impanel a grand jury at this point unless you are going to indict," a source familiar with the investigation told Fox News. "Durham is at a point where he knows he has crimes and now the question is how many people were involved and they have a pretty good idea of that group of people and what the charges can be and whether or not they can get some cooperators."

And, via The Wombats In The Mailbox: 10.31.19. Weasel Zippers: Durham Knows The Crimes, At Least Some Of The People Involved, & Potential Charges Sundance at CTH, Devin Nunes Interview on “Spygate” and “Objective Medusa”… 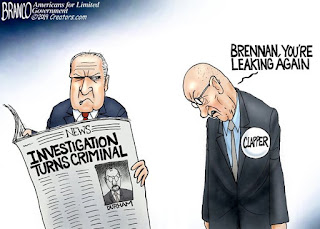 But I was told there is no Deep State; CNS News,  Haley Recalls Serving With Some Who Tried to Undermine Trump; ‘What’s At Stake is the Constitution and Tyler O'Neil, PJ Media, Former CIA Boss Celebrates Impeachment: 'Thank God for the Deep State!'

Also via The Wombats In The Mailbox: 10.31.19
Dan Sobieski at Am Think wonders Why Is Vindman a War Hero but Flynn a Traitor?. I think that's obvious. Karen Townsend at Hot Air, McCaul: Yes, Schiff And Staff Are Complicit With Whistleblower


“I think they were complicit in working with the whistleblower to come forward with his complaint and start this entire impeachment inquiry,” he said.

“I think that’s why Adam Schiff is so protective of the whistleblowers[sic] because he is concerned about the truth that will come out if we get access to him,” McCaul continued.

McCaul doubled down on his accusations by continuing to accuse Schiff of collusion and said the Democrats’ evidence doesn’t rise to the level of impeachment.

McCaul doubled down on his accusations by continuing to accuse Schiff of collusion and said the Democrats’ evidence doesn’t rise to the level of impeachment.

“The best evidence is the [Ukraine] phone call itself, which I don’t think is worthy of an impeachment proceeding,” he said. “My theory is that Adam Schiff and his staff had access to the whistleblower and were complicit with this complaint being filed, which started this entire charade — this entire impeachment inquiry.”That’s why Adam Schiff is so protective of the whistleblowers[sic] because he is concerned about the truth that will come out if we get access to him,” McCaul continued.

Steven Nelson at WaEx, 'Pinnacle of irresponsibility': Attorneys decline to confirm CIA officer Eric Ciaramella is whistleblower, Jeffrey Lord at AmSpec, Eric Ciaramella Reelects the President? "Whistleblower allegedly revealed by RealClearInvestigations: Time for him to face the music." WSJ, Parties Spar Over White House Aide in Combative Impeachment Hearing "Democrats accuse Republicans of using appearance by Col. Vindman to try to unmask whistleblower" Well, yeah. Why was Lt Col Vindman, ADVISING UKRAINE, CNS News, Trump Asks, Was Today's Never-Trumper Witness 'On the Same Call I Was?' Limbaugh: Whistleblower's Identity Revealed, Now We Know Why Dems Wanted To Hide It. Da Caller's Chuck Ross"This Ain't Over": Doug Collins Challenges Schiff-for-Brains To Testify About Whistleblower. Kimberly Strassel The double standards on the left (and in the media) have become  breathtaking to behold. Take Vindman. We are told his military service gives him extra credibility. OK. But this comes a mere week after the same people lambasted Army Major Tulsi Gabbard as a Russian asset.

Breitbart, Impeachment Witness Bill Taylor Led Ukraine Delegation for Group Advised by Hunter Biden. Do you think Schiff let the Republicans ask him about it? Erielle Davidson, Da Fed, Joe Biden Repeatedly Asked Federal Agencies To Do What His Son’s Lobbying Clients Wanted. But that's not corruption because, shut up! Capt Ed at Hot Air, Pompeo: Was Hunter Biden The Reason That Obama Didn’t Give Ukraine The Weapons We Gave Them?


POMPEO: What I know is I was on the call, I listened to the call. I thought the way the president handled it was appropriate. We were incredibly focused on a couple of simple things with respect to Ukraine strategy. And we’ve executed on that. And don’t forget, Martha, this is the administration that provided defensive weapon systems to Ukraine. The previous administration —

POMPEO: — I couldn’t tell you why, I couldn’t answer if it’s because of Hunter Biden, that Barack Obama and Vice President Biden didn’t give weapons to Ukraine. They’ll have to answer for that. Maybe — maybe I just don’t have the full story.


"... that he did not believe Trump had discussed anything illegal during the conversation. 'I want to be clear, I was not concerned that anything illegal was discussed,' former NSC Senior Director for European Affairs Tim Morrison testified today.... Morrison testified that Ukrainian officials were not even aware that certain military funding had been delayed by the Trump administration until late August 2019, more than a month after the Trump-Zelensky call, casting doubt on allegations that Trump somehow conveyed an illegal quid pro quo demand during the July 25 call. 'I have no reason to believe the Ukrainians had any knowledge of the [military funding] review until August 28, 2019,' Morrison said.. . .

That's quite an important time line!


AllahPundit, citing Adam Schiff''s leaks, Morrison Backs Taylor, Testifies That He Thought There Was A Quid Pro Quo With Ukraine — But Not That It Was Improper


He’s still testifying as I write this, and of course everything the media has is due to selective leaks, so take all of it with a grain of salt. But given Tim Morrison’s importance as a witness, it’s a cinch we’ll be hearing him testify ourselves at a public hearing soon.

Ace, NSC Official Tom Morrison, Who Listened In on Ukraine Call: Nothing I Heard Was Illegal or Suspicious Weird that Adam Schiff didn't leak this, and that the fake news media isn't reporting it. Chuck Ross at Da Caller, White House Official Testifies He Was "Not Concerned That Anything Illegal Was Discussed" On Ukraine Call.


One would think Pelosi and Schiff would want to keep an unpredictable witness like Bolton testifying in secret until they know what he’s going to say. Granted, he’s on the outs with Trump. But he’s also been a loyal soldier for the GOP for a long time. Knifing Trump would turn a lot of his friends into enemies. And besides, Bolton’s always seemed to enjoy knifing his adversaries via whispers to the media, not out in the open in front of a mic. Maybe he won’t be as helpful to Democrats as people suspect.

And some largely unsorted Impeachment follies:

Doug Collins: “A Dark Cloud Has Fallen on the House”… | The Last Refuge

Levin: Here's why Pelosi's resolution doesn't do anything - Conservative Review

Impeachment: A Deep State Diversion from What They Did in Ukraine - The Rush Limbaugh Show

Dan Bongino hits ‘disgraceful fraud’ Adam Schiff with a question the media SHOULD be asking him (but won’t) – twitchy.com 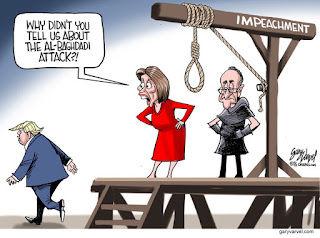 Nancy Pelosi on Impeachment, Trump, and 2020 - The Atlantic

The Left's Billionaires Have Been Pushing Impeachment All Along