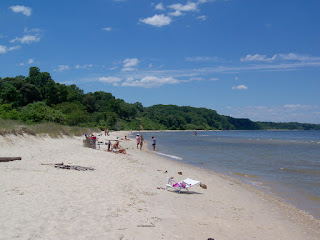 Skye and I walked down to the beach together after lunch. It's cooler today than the last two, only about 80, and the humidity is down, with a mostly clear sky. Altogether delightful, and well used today. 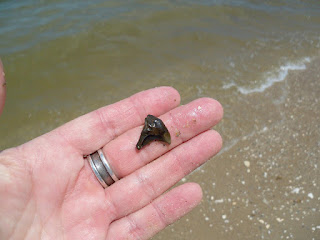 The largest of about 12 sharks teeth I found today, a bit of a chore when tethered to a wild animal. It's a large, but broken and worn Snaggletooth. 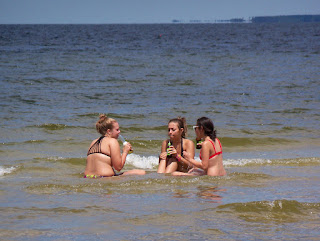 A beer and a wave, one way to cool off. 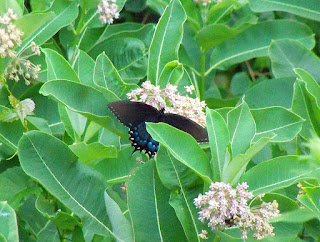 A black morph Eastern Tiger Swallowtail butterfly visiting the Milkweed that grows behind the dunes at the beach. 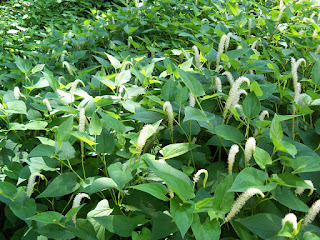 The weed du jour, Lizard Tail (Saururus cernuus) growing in a wet spot along the road to the beach


Lizard’s tail plants (Saururus cernuus), also known as lizard’s tail swamp lilies and Saururus lizard’s tail, are perennial plants that can grow up to 4 feet tall. They have a hairy stem with very few, if any, branches. Leaves are large and heart-shaped. 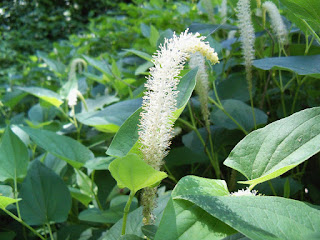 Found in marshes, along the banks of ponds and streams, it is not uncommon to see some of the plant growing under water. This provides habitats for small aquatic invertebrates, which draw fish and other species. In addition, after the plant dies, it is decomposed by fungi and bacteria which provide food for aquatic invertebrates.

This interesting plant produces white aromatic flowers on top of the hairy stems opposite the top leaf. The flower structure is a spike with lots of small white flowers that form an arch. The seeds form a structure that looks similar to a wrinkled lizard’s tail. This water-loving species has an orange aroma and spreads by rhizomes to form colonies.