A battle over bare-breasted women at one of Maryland’s most popular vacation spots is heating up as summer hits without a clear answer on whether women are free to be free at the beach.

With the heat approaching, authorities in Ocean City issued a memo this week directing the beach patrol not to confront bare-chested women or ask them to cover up regardless of complaints. The policy is to stand until the Maryland Attorney General’s Office opines on state indecent exposure laws after a local beachgoer declared that if men can go sans tops, then women can, too. 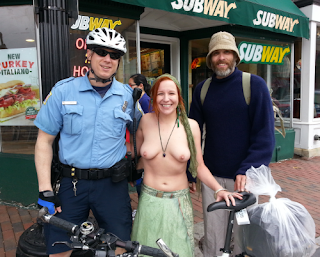 “It’s about equality, it’s about positivity, and it’s against body shaming and the forced sexualization of the female form,” said Chelsea Covington, a self-described “topfreedom” advocate who wrote a legal brief arguing that Maryland law allows women to go bare-chested in public. “It is most certainly about equality under the law.” 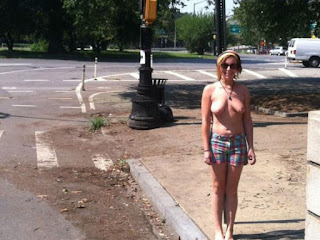 So, they are effectively condoning it until the AG decides.


The legal dust-up has rankled the resort town along the Eastern Shore, with officials worried seminude women will besmirch Ocean City’s reputation as a family-friendly vacation destination.

“The mayor and council have no desire to make Ocean City a topless beach,” said Jessica Waters, a spokeswoman for the city. “We have no plans for becoming a topless beach.”

Maryland law is not entirely clear when it comes to the question of whether women are expressly prohibited from baring their breasts in public.

Chelsea trying to get noticed on Brighton Beach,  New York.

Legally, it's a slam dunk case, if you really believe in equality of the sexes. However, I suspect that most of the opposition will come from women. I can hardly wait to find out how the notorious RBG rules on this one.

I haven't been to Ocean City in many years, but maybe a trip is in order?

Wombat-socho came in a little late with "Rule 5 Tuesday: EDC Girls".
Posted by Fritz at 6:00 AM